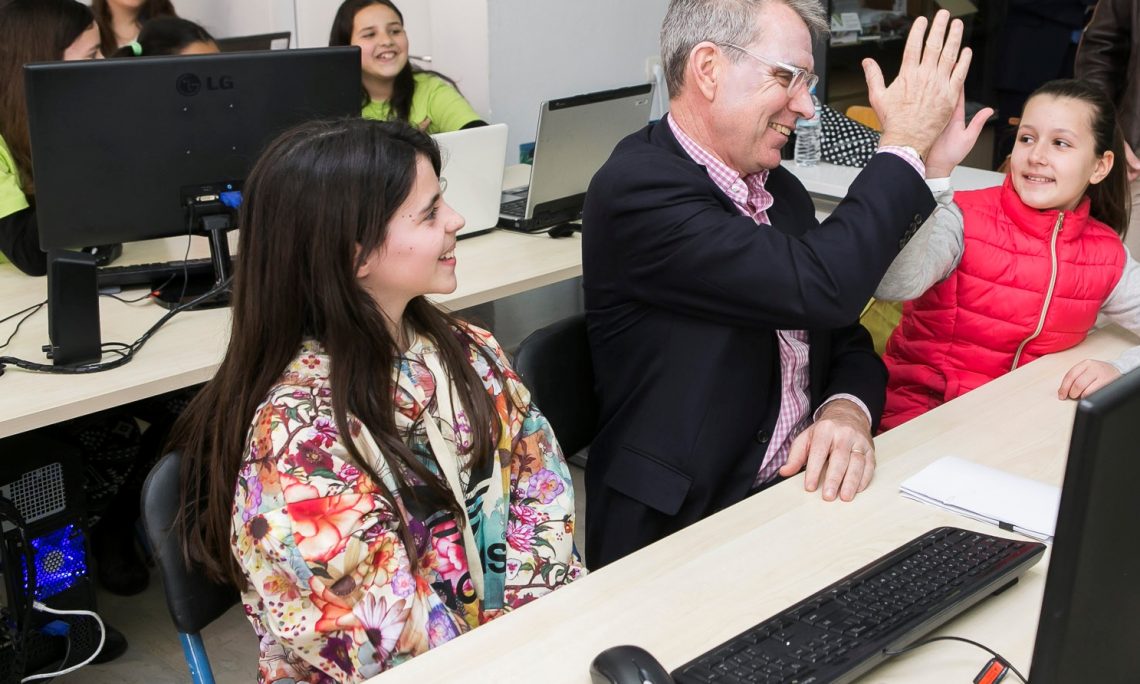 Γειά σας, συγχαρητήρια!  Let me just start huge congratulations to all of you.  First of all, I want to say how excited I am to be here in Trikala.  I want to say thank you very much to the Mayor, Dimitris Papastergiou, for welcoming me here today.

I have heard a lot about Trikala.  It’s the first “smart city” in Greece; it’s a city that has been at the cutting edge for programs like e-governance and your driverless bus.  So Trikala is a technology city.  So it’s perfect that we have been able to bring the CodeGirls program to this city.  And I hope that some of the skills that you have learned through the CodeGirls program will help you to make Trikala an even smarter city in the future.

I want to congratulate all of you on completing the second round of CodeGirls and say how impressed I was to see the projects that you completed.  Completing this program means that you are now part of a global network of young women involved with technology.  And I hope you all feel incredibly proud about what you have accomplished because you’re all problem solvers.

I want to tell a little story.  In America, this is Women’s History Month.  And, this year, there has been a lot of attention to one particular woman in the United States.  Her name is Katherine Johnson.  She finished high school when she was just 14 years old.  She focused a lot on math and science and she was the first African-American woman to attend the West Virginia University.

After she graduated, she then went to work for NASA, the American Space Agency, where she got to be known as a “human computer.”  She was responsible for calculating the trajectories for some of the first NASA human space missions, including Alan Shepard, who was the first American in space.

In 2015, President Obama gave Dr. Johnson the Presidential Medal of Freedom in recognition of her accomplishments.  And now, her life is the subject of a big Hollywood movie called Hidden Figures.  She also has a particular honor in that she just had a Lego figure manufactured to represent her.

So one of her pieces of advice to young people was to “find your dream and work at it because if you like what you’re doing, you will do well” – which is great advice for life.  We hope very much that your experience through CodeGirls will help to inspire you in the same kind of future that Dr. Johnson has enjoyed.

I have already met a couple of CodeGirl graduates who have talked to me about how this program has changed their lives.  There is one young woman who was part of one of the earlier CodeGirls, Olga Konstantakopoulou, who has already been offered a competitive internship after her participation in the Kalamata program.  Olga is now attending the American College of Greece and she’s been interviewing with technology companies that have been attending the Career Day that ACG hosts every year.  And two of those technology companies offered Olga a job.  So this is a great example of how CodeGirls truly can change your life.

But, regardless of what you do in your futures, I can guarantee you that the kind of technology skills that you have learned through CodeGirls will serve you well.  And our hope is that, whatever you do in the future, CodeGirls will help to give you a sense of empowerment, to show you that there are, truly, no barriers to your future.

Like Adonis said, your country needs you, Greece needs you.  You are all part of the future prosperity of this country.

I want to just finish by, again, thanking all of our partners: the great, technology-empowered Municipality of Trikala; all of our partners at MATAROA; the 7th Public High School, whose director is here somewhere, oh there he is, thank you, ευχαριστώ πολύ; and then the Information Networking Institute at Carnegie Mellon University.

I also want to say special thanks to the instructors.  I can tell from your presentations today how committed you are to what you’re doing.  But I also see how inspiring you’ve been.  So thank you for that.

So, again, thank you for letting me be here with you today to share this occasion.  Thank you for recharging my sense of hope about the future of Greece.  And I look forward to being even more impressed in the future.