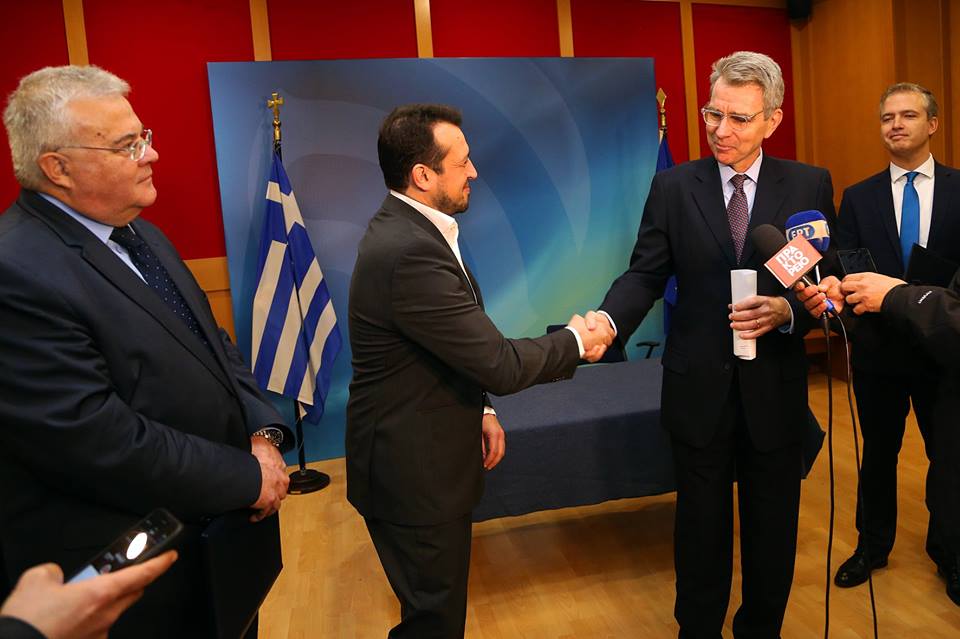 First of all, let me take advantage of this opportunity to say thank you to Minister Pappas and to Michali for facilitating this agreement.  We’re meeting today at the start of what I believe will be a historic year in U.S.-Greece relations.  I had the honor on Monday to be in Thessaloniki with Minister Pappas, and I want to thank him publicly for his very gracious remarks about the U.S.-Greece relationship, the Prime Minister’s commitment to building on the momentum we have from the Prime Minister’s visit in October to Chicago and Washington, D.C., and our commitment as the U.S. government to working as closely as we can over the next few months to ensure that the TIF, the Thessaloniki International Fair, in September really marks a watershed in the U.S.-Greece relationship.

The timing is extremely important.  The TIF will come a couple of weeks after the completion of the third bailout, at a moment when Greece will be well on the way to economic recovery – we are confident – it will represent an opportunity to highlight the many, many advantages that we see in Greece today – the strong human capital, the strategic geography, Greece’s role as a pillar of stability in a complicated region, the fantastic human capital – and then bring that together with the very best of American technology, innovation, our digital economy, which is such an important part of what is driving economic growth in the U.S. today.

I’m very excited that next week we will have Minister Pappas in the United States.  He will be accompanied on his travel by Jonathan Cohen, the Deputy Assistant of State for Southeastern Europe and the Mediterranean.  Jonathan and Minister Pappas will start out in my home state, in California, visiting both Hollywood and Silicon Valley to see the companies that are driving the digital economy in the United States, to present the opportunities that are emerging here in Greece as a result of the reforms and administrative changes that the Minister’s Ministry has put into place and to encourage American companies in the digital economy, in the new economy, to look to Greece and also to look to TIF.  He will then be traveling onwards to Boston, to the MIT corridor, to do some of the same, and I’m very excited about these visits because, for me, one of the really untold success stories of the Greek economy is the success of the startup sector, the spirit of entrepreneurship you find among young people at universities here in Athens, in Patra, in Thessaloniki, and I think this is exactly the right time to put a spotlight on that part of the Greek economic story.  And then the Minister will finish up in Washington, D.C., almost exactly one year after his visit to Washington at the beginning of the Trump Administration to set the tone for a lot of what we’ve done over the past year.  So, I’m very excited about this trip.

So, Minister, thank you for your leadership on all of these issues.  I know there’s a lot of work that’s going into your trip to the United States, and I’m very excited about seeing the results.  Thank you.