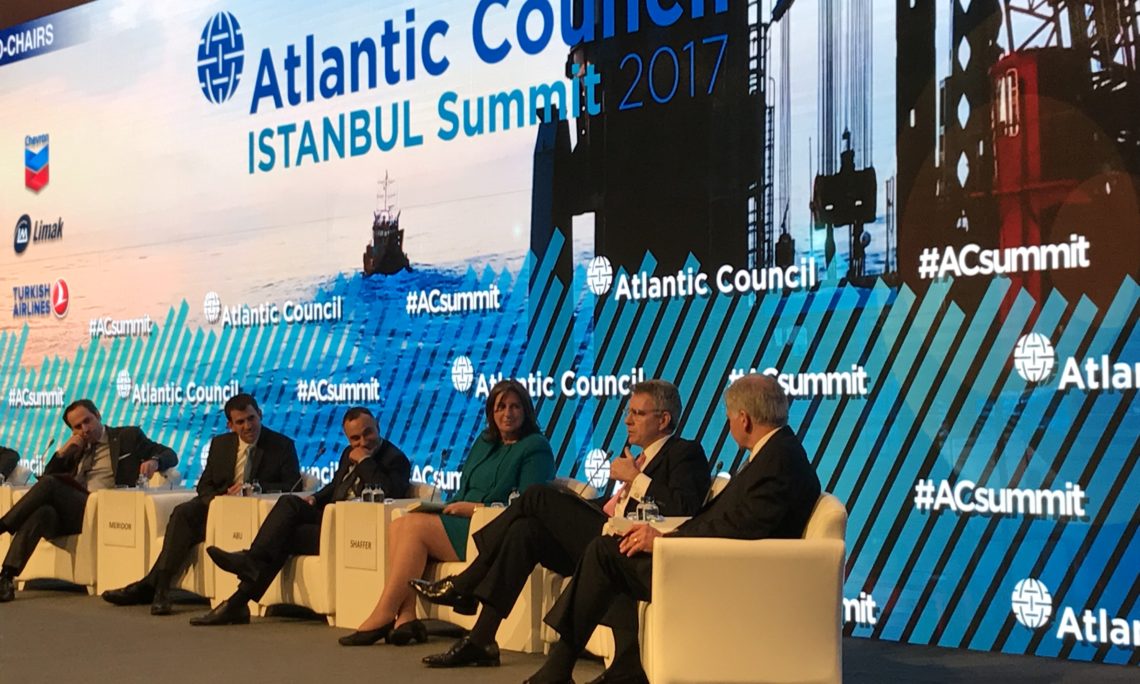 “Boosting Regional Energy Partnerships and Trade in the Eastern Mediterranean”

Q:  Let me turn to Ambassador Pyatt and ask him to give us a perspective from U.S. Government point of view and, also, from an Athens point of view.  So how does the Eastern Mediterranean and these resource developments and export scenarios look from Athens?

Ambassador Pyatt:  Great.  Well, first of all, David, let me say what a pleasure it is for me to be here.  Thank you to the Atlantic Council.  I’ve heard great things about this conference and there were a couple of times when I was hoping to come from Kyiv, but events got in the way.  So it’s fantastic to finally be here.

I’ll start with the U.S. interest, which is strongly focused on supporting energy security and diversification in Europe.   And, if there is one thing that I learned through my three years in Ukraine, it is that there is no surer way to advance the U.S. goal of a Europe whole, free, and at peace than locking in progress on energy diversification.

From that perspective, I think one of the things that’s most interested me, since my arrival in Athens about a half year ago, is the centrality of energy security in Greece’s own foreign policy vision.  And you can see that in statements from the Foreign Minister and strategic thinkers in Athens but also in terms of concrete progress that is happening.

There’s a real potential for Greece to emerge as a significant European energy hub if the opportunities that are present now can be locked in.  This would be an important driver of investment, going forward, and would help to answer the question that Greeks are asking, which is what drives their economy going forward as they begin to come out of this seven year crisis period and lay the foundation for sustainable growth.

From that perspective, there’s a lot more going on in Greece than, I think, a lot of people appreciate.  The signature example, of course, is TAP.  It’s important to recognize that project; as my friend and former colleague Amos Hochstein liked to point out, the first new energy infrastructure built anywhere in Europe specifically to carry non-Russian gas.  TAP is twenty percent complete in Greece now – twenty percent of the pipe is already laid.  It’s very much, it’s been very impressive to me to see how strong the political support for that project is across the government, especially when I travel in Northern Greece.  Everybody’s focused on the job creation that TAP represents and the potentiality to do even more.

But, that’s not the whole story.  There are also significant developments with the government’s push to develop this north-south corridor.  It’s quite significant that, when Prime Minister Tsipras travelled to Kyiv this winter, he and President Poroshenko talked specifically about the idea of using Greece as the landing point for LNG getting as far as Ukraine, which would have the effect of locking in the progress that has been achieved in Ukraine in terms of energy diversification, using reverse flow through Europe.

Greece already has excess or unused capacity at its Revithoussa plant, the gasification facility, but there is also an ambitious proposal for Alexandroupolis – both of which the United States supports as part of this broader goal of advancing diversification.  And then the other piece, and I was especially interested to hear Keith’s point about the commercial ripeness of some of these Eastern Mediterranean plays because one thing that’s very interesting to me is the overlay between these potential commercial arrangements in the Eastern Mediterranean and the already existing strategic cooperation.

So, three weeks ago, I was in the Peloponnese as Israeli, Greek, and American air force officers exercised together, along with some other partners.  So you’re building… and that’s just one example of what is a thriving Greek-Israeli bilateral relationship.  And so you’re building on solid ground as you begin to develop this commercial potentiality.

And all of which would have the effect, to finish where I started, of advancing the U.S. strategic objective, which is to continue to support energy diversification across Europe.

Q:  This is a question for Ambassador Pyatt but, also, to the whole panel.  And this is, obviously, for a later stage because the quantities do not justify this right now, but there was a lot of talk lately about the pipeline from offshore Israel through Cyprus, collecting some Cypriot resources as well, on the way to Crete, and then onwards to Greece, and onwards to the European market, feeding it into TAP or other pipelines.  How real is that, you think, from a political and, also, from a commercial perspective?  This is for the panel.

Ambassador Pyatt:  Yeah, I mean, that’s really a question for Keith and the other market players but, what I will say, as the diplomat on this panel, is that it’s relatively rare in my business where you have an issue that is truly win-win.  Usually, somebody feels like they’re getting a shorter end of the stick.  What’s fascinating to me about these regional issues – and the point about timeliness is also relevant – this is a set of issues that is genuinely win-win for all of the regional players, whether Israel, Turkey, Cyprus, Greece, or the entire European Union.  Which is what gives me some hope that, despite the considerable cost obstacles to some of these more ambitious projects, there’s actually a good chance that some of them will actually come to fruition.  And, again, I would come back to emphasize how important it is that TAP, which went through a very long gestation period, is now real, is going to be completed, and will carry gas to Europe.  And I think that, it’s in that spirit that we need to approach some of these more ambitious proposals.