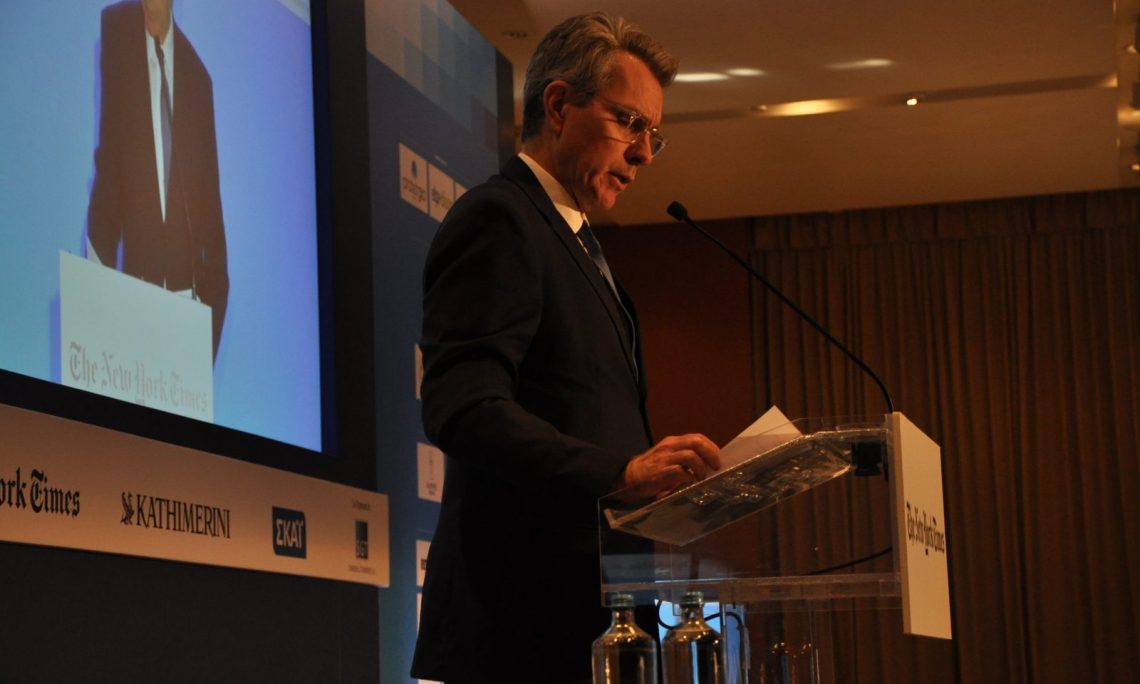 Good afternoon, ladies and gentlemen, ministers – καλησπέρα σας.  It is a wonderful honor for me to be here.  I want to say thank you very much to the New York Timesfor convening this forum and also for giving me the opportunity to speak today on some of these critical geopolitical issues.

The strong bilateral relationship between the United States and Greece is founded on our shared democratic values, our common economic, political, and security interests.  Energy is clearly one of those shared interests.  Over the last few years, the U.S. Embassy in Greece and our whole team have been keenly engaged on energy issues, recognizing that promoting energy security and diversification of supply is essential to the longstanding U.S. goal of building a Europe whole, free, and at peace.  I was reminded of that same principle every single day at my previous post in Ukraine.

Beyond its strategic impact, a secure supply of energy is also a key component of Greece’s economic recovery, and growth, and security, and is, therefore, linked to the U.S. strategy of supporting Greece as a key pillar of stability in the strategically important region of the Eastern Mediterranean.  Of course, the global energy dynamic is constantly changing.  When President Obama came to office eight years ago, the energy landscape in the United States and globally looked very different than it does today, and there is every indication that that pace of change is going to continue.

Eight years ago, the United States was producing about 5 ½ million barrels of oil a day and was importing a growing amount of liquefied natural gas.  About a year ago, a U.S. company began exporting LNG from its facilities in Louisiana – the first LNG to be exported from the United States continental area.  This was a transformative moment in the global energy landscape.

The growth of LNG shipping infrastructure – the liquefaction facilities, LNG tankers, and new and proposed LNG terminals around the world – has laid the foundation for further transformation in world gas markets.  Increasingly, natural gas is on the path to becoming a tradable commodity – one that competes with pipeline gas and creates new market dynamics that will shake up traditional supply routes.  Development in the LNG market hasn’t been quick or easy – especially given its dependence on big, expensive infrastructure.  But, the arc of the last decade clearly shows that the gas market is expanding to allow for stronger competition, which is good for importers like Greece.

This transformation of the gas market has already produced dramatic results elsewhere in Europe.  For example, Lithuania’s decision to move forward with an LNG terminal gave it new pricing leverage over Russia’s Gazprom, which had previously controlled 100% of that country’s gas supply.  Similarly, I saw in Ukraine how EU support for reverse flows from the west, combined with the government’s move to a full cost recovery model for gas pricing, broke Gazprom’s monopoly and denied Russia the energy weapon that Moscow has long used to keep Ukraine under its thumb.

Though less dramatic than Eastern Europe and the Baltics, a similar market change is happening here in Greece and throughout the Balkans – where new pipelines and terminals are creating a new energy market in countries who want to support their own energy security.  The Revithoussa LNG terminal has already opened the Greek market to LNG imports, and has substantial capacity still available.  The construction of the Trans-Adriatic Pipeline will finally bring large volumes of Azerbaijani natural gas to Greece and beyond to elsewhere in Europe.  The Greece-Bulgaria Interconnector will open Bulgaria and the rest of the Balkans to new sources of natural gas.  And, the proposed floating storage and regasification unit—the FSRU—near Alexandroupolis will provide an additional entry point for LNG into this region.  These are all projects that the United States strongly supports.

We are confident that Greek consumers, and the Greek economy as a whole, will realize enormous benefits from these projects. We also want to see Greece establish itself as an important player in the region’s energy sector – a regional energy hub – and will continue to support our Greek partners as they move towards achieving this goal.  After all, energy diversification helps countries stand on their own feet – self-reliant, independent, and secure.

One of my State Department colleagues recently pointed out that European “…energy security is not about energy.  It’s about everything around energy.”  Former Vice President Biden also spoke to this issue two weeks ago in Davos, when he said that “Russia is working with every tool available to them to whittle away at the edges of the European project;” they are “using energy as a weapon—cutting off gas supplies mid-winter, raising prices to manipulate nations to act in Russia’s interests.”

Russia’s demonstrated ability to use energy as a weapon has also been recognized by key members of the Trump Administration.  Secretary of State-designate Rex Tillerson – who, of course, knows more than a few things about this field – spoke about the European energy situation before Congress.  He said that “Energy is vital to every economy around the world over, so it can be used as a powerful tool to influence…”  Secretary-designate Tillerson also noted that the U.S. supply of LNG “…can provide optionality to countries so that they … cannot be held captive to a single source or to a dominant source.”

Russia has repeatedly cut off supplies to Europe through Ukraine, showing the very real threat that many European countries face from this single supplier.  Gazprom’s willingness to use energy as a weapon has drawn the attention of the European Commission and the United States to the importance of reducing reliance on a single, dominant supplier.  And I can attest, from my work with our EU partners in Ukraine, to the absolutely essential leadership provided on these issues by Commissioner Oettinger and, later, Commissioner Šefčovič.  This is a case of strong convergence between U.S. and EU approaches.

Here in Greece, the projects that I mentioned before – TAP, the IGB, the LNG terminals – are major contributors toward achieving real energy security for Europe.  These infrastructure projects, combined with others coming along elsewhere in Europe, will determine the next 30 years of energy security on this continent.

And, we need to protect these projects against other proposed schemes which threaten the future of Europe’s energy security. For instance, moving forward on Nordstream II or on ITGI Poseidon, two projects that would exclusively bring Gazprom gas to Europe and bypass a reliable supply line through Ukraine, would exacerbate European dependency on Russian gas and destroy opportunities for diversification over the next 25 years.   If this occurs, the economic burden on Ukraine – losing nearly $2 billion a year in transit revenue – will be immense and could threaten the country’s economic stability and independence. Maintaining unity in Europe on our core principles is of paramount importance, and energy diversification is a critical component of achieving that goal.

Of course, our efforts to achieve European energy security do not exclude Russia as a supplier in Europe.  Russia is a significant resource-holder on Europe’s borders and, as such, should be one of Europe’s main gas suppliers.  But, Russia cannot be permitted to monopolize the energy market as a sole supplier – leaving countries with zero alternatives, undermining healthy market competition, reducing transparency of pricing, and leveraging their market dominance.

We will continue to support our partners, to establish and deepen the energy interconnections between European states with the goal of creating a healthy, dynamic energy union in Europe.  Greece has a critical role to play in that energy union with these vitally important natural gas infrastructure projects.  Greece also has the capacity to produce its own domestic oil and gas – which is, really, the ultimate safety net for energy security.

While the exploration and production potential here is largely untapped, companies like Energean, a Greek company backed by significant U.S. investment, have demonstrated their ability to deploy technology, expertise, and capital in Greece in a way that creates jobs and respects the environment.  Moving forward, launching new tenders for exploration and production of Greek hydrocarbons will provide new opportunities for domestic and international companies to work together to create jobs here in Greece.

Diversifying energy sources, beyond hydrocarbons, is another important tactic to achieve real energy security.  I commend Greece for the progress it has already made in increasing its supply of energy from renewables, including bountiful solar and wind sources.

Energy is a big business and can help fill Greek needs for investment and jobs.  Since I arrived in Greece, I have asked many people which sectors of the Greek economy do they believe hold the most promise for long term growth and recovery?  Invariably, energy is one of the top answers.

I believe that investment in the energy sector will increase as the Greek government demonstrates its commitment to supporting private-sector-led growth.  The progress that the Greek government has made with various privatizations, such as the Piraeus Port and the regional airports, are positive signs to investors.  Moving quickly on other high-profile privatizations within the energy sector, such as the privatization of DESFA, remains critically important to attracting energy investment and we look forward to seeing progress on those issues in the future.

My goal as American Ambassador is to help Greece succeed, to capitalize on these tremendous opportunities.  Regional and domestic energy sector growth benefits Greece, it benefits the United States, it benefits Europe, and it benefits this strategic Aegean / Eastern Mediterranean region.  We look forward to working with our Greek and American partners as Greece does its part to promote European energy security, develops its own energy resources, and creates the opportunities that attract investment and economic growth.