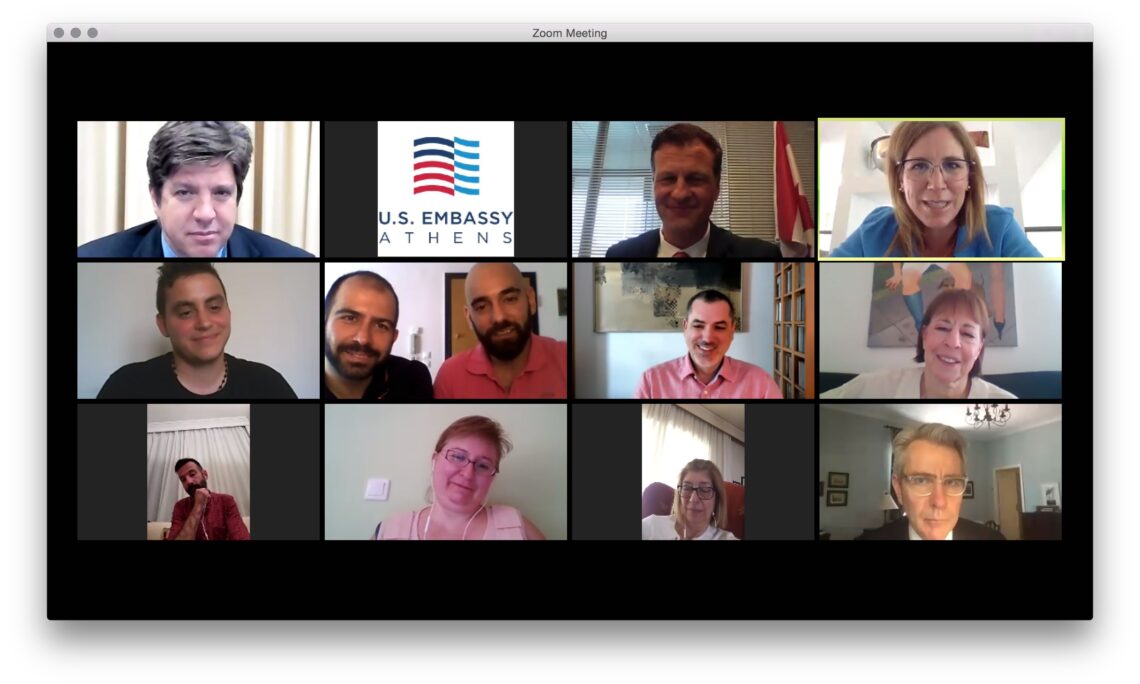 Thank you, Cindy. First of all, thank you to everybody for joining us in this event, and I’m especially glad that we’ve been able to partner again with the Dutch Embassy on these issues. Caspar and I — Stella’s predecessor in the past — had done some joint programming for Pride Month, and I’m really honored to have Ambassador Ronner Grubcic picking up that baton along with all the other partnerships that we have developed with our Dutch colleagues on entrepreneurship and other issues critical to Greece’s future.

I’m also really glad to have our northern neighbor and my friend Mark Allen, the Canadian Ambassador, joining as well. As I said to Mark, so this will now be a troika going forward – the three Embassies collaborating on these events

These are issues where we all still have work to do. We were reminded of that just earlier this month where there was a really important landmark judgement of our Supreme Court, a 6-3 ruling prohibiting workplace discrimination on the basis of sexual orientation – that was a judicial ruling in the United States, which was founded on the Civil Rights Act of 1964, which again tells you how long our society has been grappling with these issues of equality and justice.

I must say today, having now been in part of this conversation in Greece for four years, I see clear signs of progress.  The Prime Minister in last week’s human rights and business conference spoke very clearly on the importance of workplace equality. An important development is Alex Patelis, the Prime Minister’s highly regarded chief economic advisor, came out publicly in his interview with Kathimerini, and I was also really proud and glad to see my friend Minister Niki Kerameus posting very clearly on the weekend on the question about, first of all, the commemoration of Pride Month, but also the imperative of preventing discrimination in any form of human identity.

The Embassy, of course, has been very proud of our work in this area over the years. We funded Athens and Thessaloniki Pride events in the past. We’ve done speakers programs and film showcases. I’m glad, I know we’ve got both Vangelis and Apostolis from Thessaloniki EuroPride on the line today. I think we’re all looking forward to EuroPride Thessaloniki as another really important opportunity in a city which is, let’s be honest, more conservative on this than Athens.

And we look forward to figuring out how that will be reconfigured in the light of the pandemic, and I very much look forward to hearing from the EuroPride organizers today on what they’re thinking in terms of how to move the Thessaloniki event forward, but also how we can most effectively partner going ahead, as we work on these basic issues of human rights that are so important to the democratic identity of all of our countries.

I would also like to emphasize how important it is for us as an Embassy to empower Greek civil society. These are issues that Greek society will make decisions on, will adopt positions on. Our role is not to offer answers but rather to share experiences as I did in my reference, for instance, to the U.S. Supreme Court ruling.

So, let me finish up there. As I emphasized, I’m really looking forward to hearing from our Greek colleagues today, and again a special thanks to all of my diplomatic colleagues who are on today but especially to the Dutch and Canadian Ambassadors – those are two critically important relationships for the United States and the U.S. Embassy, and I’m really happy we are able to work together on this topic. So, thank you, Cindy.