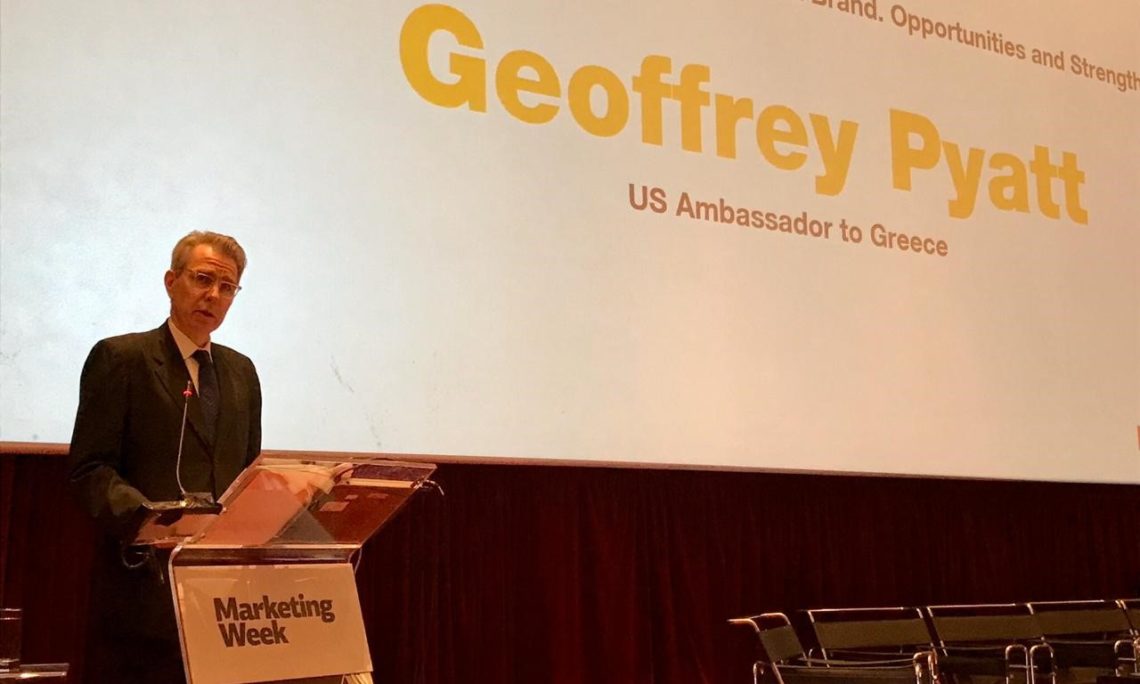 I’m especially pleased that I see in the audience so many representatives of American-affiliated companies, because during my time as U.S. Ambassador, we have seen a dramatic expansion of cooperation between the United States and Greece as Greece has transformed itself from being the problem child of Europe to being a pillar of stability that plays a central role in the American strategy for this region.

With concerted effort from both sides, we’ve raised the bar for U.S.-Greece relations. The process of reform and economic recovery is now well underway.  And under Prime Minister Mitsotakis’ leadership, we are seeing accelerated reforms aimed at streamlining and digitizing government, cutting through red tape, and attracting foreign investors.

Greece, and especially northern Greece, is emerging as a hub for regional energy and transportation infrastructure, as well as an international gateway to the Balkans, a region of over 30 million people.  This is a new era for Greece, and an unprecedented opportunity for all of us to reach further and take our bilateral relationship to new heights.

I was in Washington last month for the first Delphi-Kathimerini conference, and I observed there that perceptions of Greece in the United States, and indeed internationally, are tending to lag behind the Mitsotakis government’s rapid progress and advanced thinking of issues of reform.  So this, for me, the biggest challenge right now for U.S.-Greece relations: we have to spread the word in Washington and New York, Chicago, Houston, and Silicon Valley that Greece is open for business and represents a substantial value proposition—which is where this conference comes in.

As I’ve learned through more than six years now as an American ambassador in Europe, you have to have a bumper sticker. You have to have a simple message explains what you’re doing to regular folks, and as corporate communications executives for major companies in Greece, I know that you all will play a significant role in defining that bumper sticker.

Across all sectors from innovation and energy to shipping and tourism, American companies are seeing that Greece’s return is real, and companies are succeeding here due to the combination of a highly skilled yet affordable labor force, Greece’s wealth of natural resources, its prime geostrategic location, and the political stability and reliability that comes from membership in the European Union and NATO, combined with a rapidly deepening security relationship with the United States of America.

The investment picture in Greece is becoming better every day as the government makes good on its promises to remove bureaucratic obstacles and increase cooperation and dialogue with the private sector.

Continued reforms to improve the efficacy and efficiency of the judicial system, to further rein in unnecessary regulations and red tape, and strengthen the banking system will enhance Greece’s attractiveness as a location for American and other foreign investors.

Because of these positive developments, we’re already seeing new commitments. Pfizer, Cisco, and Deloitte have all committed to new or expanded footprints in Thessaloniki, for instance.  And Minister Pierrakakis and the Ministry of Digital Governance are taking steps to facilitate expanded high-technology investment, a sector that previously was not associated with Greece.

Prime Minister Mitsotakis is your most persuasive advocate for foreign investors in Greece; I’ve seen that myself. And he has a compelling story to tell about how far Greece has advanced over the past five months.

The Prime Minister will have a critically important opportunity to share the story of Greece’s transformation during his visit to Washington and meeting with President Trump at the White House on January 7th.

The Prime Minister’s engagements in Washington will provide a critical opportunity to inform investors and policymakers of the opportunities that the new Greece has to offer.

U.S. government is committed to do all that we can to help ensure that Greece moves forward economically, attracting investment and creating new jobs.

And as my boss, Secretary Pompeo, mentioned during his visit to Athens in October, we also want to underline our security commitment to Greece as a pillar of stability in a wider region that stretches from the Eastern Mediterranean up through the Balkans and the Black Sea. Greece is a country which shares America’s values, and after a very difficult decade, Greece’s return to economic prosperity is good news, not just for the people of Greece, but for American interests in this strategically viral part of the world.

Another big upcoming opportunity for Greece to shine on the world stage, which I hope you as communicators will discuss over the course of today, is 2021, when Greece celebrates its bicentennial.  I remember vividly how important America’s bicentennial in 1976 was to shaping our own perceptions as Americans of what our country stood for and where we were going.

Prime Minister Mitsotakis has indicated that he wants Greece’s bicentennial celebrations to acknowledge Greece’s history, but also to focus on Greece’s future, including the emerging innovation, technology, and entrepreneurial sectors, which the U.S. Embassy has helped to nurture over the past few years.

In that spirit, I was very pleased to learn that the bicentennial celebrations will give a platform for Greek young people, whose talents and skills are going to be so important to this country’s return to economic prosperity and long-term growth.

The United States shares Greece’s goals and values and looks forward to working with the Greek government on programming to support this bicentennial.  And just as the Ancient Greeks’ vision of a government of, for, and by the people directly influenced my country’s founding fathers, the American Revolution helped to inspire Greece’s struggle for independence 200 years ago.

Two hundred years later, I’m happy to report that the longstanding bonds of cooperation and friendship between our two nations are stronger than ever, and there’s broad consensus in Washington that Greece has become one of our most valued regional allies, a pillar of stability and a guardian of Western democratic ideals in a rough neighborhood.

As Secretary Pompeo said often during his visit to Athens, Greece is showing the way forward.

Greek democracy has proved remarkably resilient, and Greece has taken bold steps towards economic growth. Greece is showing leadership by forming partnerships with democratic nations across the region and supporting its neighbors’ progress towards Euro-Atlantic institutions including, importantly, your neighbors in North Macedonia.

I am confident that our trade and investment relationship is going to continue to grow in the years ahead, in line with the vision and the market climate that Prime Minister Mitsotakis and his team are helping to create.

The U.S.-Greece relationship is stronger than ever. We’ve institutionalized those gains through bureaucratic structures like the Strategic Dialogue, and we have outlined an ambitious vision for our work in the years ahead.

As we look towards 2021, the celebration of democratic values that legions of Greeks and Americans have pledged to uphold and defend, it’s clear to me that Greece is back, that the United States will continue to stand with our trusted ally to ensure that this country is known not only for its storied past, but also for a bright and prosperous future.