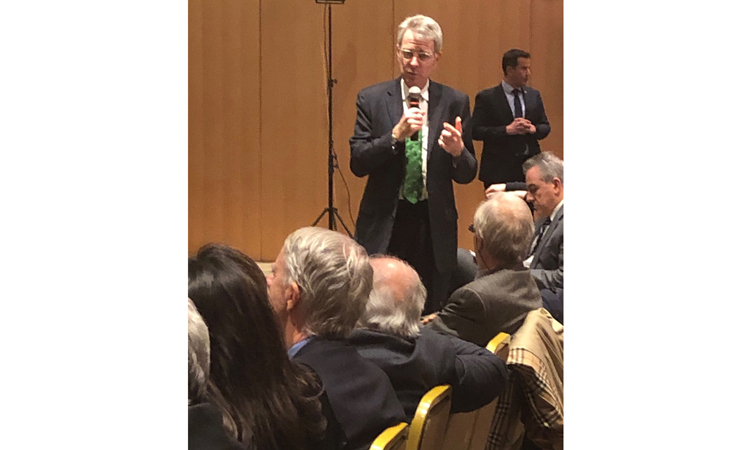 Καλησπέρα. Good evening. Thank you very much.  I’m really honored to be part of this discussion, and I want to congratulate ELIAMEP for putting it together.

ELIAMEP’s contribution to the public dialogue in Greece is a great example of the appreciation for free expression and democratic values that Greece and the United States hold in common. So, it’s no wonder that we consider ELIAMEP to be a really great Embassy partner.

I want to start this evening by reiterating something that has proven true time and again during my now two and a half years as American Ambassador in Greece: deepening the U.S.-Greece relationship has strong bipartisan support in the United States.

When former President Obama came to Greece shortly after my arrival, he stressed that U.S. support for Greece’s economic recovery was a priority over the course of his administration. And just over a year later, in Washington in the Rose Garden, President Trump reaffirmed with Prime Minister Tsipras our support for Greece and formally accepted our status as the honored country at the 2018 Thessaloniki International Fair, an event that became a celebration of our growing trade and commercial relationship but also a signal of U.S. confidence in Greece’s economic recovery.

At TIF, Commerce Secretary Wilbur Ross pointed out that the presence of over 50 U.S. companies at TIF was unprecedented in his experience, and likewise, Senator Ron Johnson of the Senate Europe Subcommittee said much the same thing.  And of course, there were many others there from across the U.S. government, serving as a measure of U.S. interest in Greece.

TIF was a tough act to follow, but just two months later, Minister Katrougalos and Secretary of State Pompeo launched the first U.S.-Greece Strategic Dialogue in Washington, with an impressive depth of interagency participation, committed to sustaining the momentum in our bilateral ties in six specific areas:

The Strategic Dialogue elevated and institutionalized our relationship in a manner consistent with how many of the Embassy’s long-time friends have viewed the U.S.-Greece alliance.  And I want to thank Minister Katrougalos for recently hosting a bilateral working group to follow up on several of these areas with a broad assembly of Greek government experts – reflecting how both of our governments are committed to building on the foundation that the Strategic Dialogue provides.

At the Munich Security Conference, Prime Minister Tsipras met with a large, bipartisan and very senior delegation from the U.S. Congress, all of whom expressed their strong appreciation for Greece’s role as a pillar of stability in the region, Greece’s impressive contributions during the refugee crisis, its creative implementation of the Prespes Agreement, and our efforts to continue deepening the bilateral defense and security relationship.

In Washington, the stock of the U.S.-Greece relationship today is higher than it has been for many years, and that is reflected as well in the unprecedentedly large American delegation that will be at the Delphi Forum this weekend.

I also want to underscore that every U.S. delegation that passes through Athens expresses a similar appreciation for Greece’s unique geopolitical role. Last week, for instance, we hosted two senior Congressional staff members, including the chief of staff of the Senate Foreign Relations Committee, and they met with a broad cross-section of Greek political and civil society leaders. Their meetings included government officials, party leaders from New Democracy, as well as current and retired military personnel and other leading thinkers from academia.

I am glad that these colleagues were able to listen to George Koumoutsakos, who shared his thoughts on the strategic importance of our bilateral relationship and the need to continue capitalizing on the momentum we’ve been building up. And Minister Katrougalos, I can assure you that they also had excellent meetings with your colleagues at the Ministry of Foreign Affairs.

And so I think I speak with some authority when I say that in Greece, too, deepening the U.S.-Greece bilateral relationship is an issue above partisan politics. The key to this happy state of affairs is our converging security interests, our shared values and our shared goals on regional security, stability and prosperity.

And at this point, I’d like to briefly address the momentum in our relationship and some of the concrete ways that Greece and its geostrategic location add value, as the subject of this evening’s panel puts it.

On energy, we are seeing the historic completion of the Trans-Adriatic Pipeline, the successful expansion of the Revythoussa gas terminal, and irreversible progress on the Greece-Bulgaria Interconnector, the IGB. All these projects help to put Greece on the world energy map as a contributor to the diversity of energy sources and as a hub for this region.

The expansion of the Revythoussa LNG terminal was immediately followed by the first delivery of U.S. LNG, another important milestone, which we celebrated at the Strategic Dialogue, which in turn contributes greatly to energy security in the wider region. We expect a second U.S. LNG delivery very soon and remain actively engaged, as well, to support the Floating Regasification Unit in Alexandropouli.

On trade and investment, over the past year, we’ve seen some big, new American projects in the tourism industry through Avis, Hyatt, Marriott and others, and the Neorion shipyard in Syros through Onex. We are hearing from more and more American investors that they are again interested in Greece; however, increasing U.S. investment will also require increased commitment on the Greek side to reforms and transparent privatizations.

In this regard, we are encouraged that the Request for Proposals for the Hellenikon project was issued last week, and we are hopeful that some top U.S. entertainment companies will put forward competitive and compelling bids for that transformative project.

I would also highlight the upcoming SelectUSA Summit, which I will again attend in Washington. Greek businesses — like Pyramis in Thessaloniki, which is a top supplier to IKEA in America, or Yoleni’s, one of my favorite places to enjoy Greek food — have used SelectUSA to help in their efforts to expand their operations in the U.S., reinforcing our mutually beneficial business ties.

On counter-terrorism cooperation, defense and security, we are seeing some of the closest cooperation in the history of our bilateral relationship. NSA Souda Bay is busier than ever. In December, we conducted our largest ever joint counter-terrorism exercise, and in January we saw the continuation of the large-scale Alexander the Great exercises between our Marines in Volos and the rotation of the 4thCombat Aviation Brigade of the U.S. Army through Stefanovikio, and next month, the 4thCAB aviation elements from all over Europe will converge in Thessaloniki as they prepare to head home to the United States.

Through these exercises and working together, the United States is gaining a better appreciation for Greece’s ability to leverage its unique location to develop high quality training ranges, and we hope to develop these capacities further.  I would also note Greece’s lead role in maritime surveillance, which dovetails with the United States’ Maritime Domain Awareness efforts in the Black Sea and Eastern Mediterranean.

On people-to-people ties, with the support of the Ministry of Education, we moved forward this year with the launch of a new education exchange program in Greece – the Future Leaders Exchange Program, or FLEX.

FLEX will provide scholarships for ten Greek high school students – students from public schools across Greece, who otherwise would not have such an opportunity to study in the United States for a year. And as we pledged at the Strategic Dialogue, we will be bringing in a large regional educational conference, the Gilman Scholar Summit, to northern Greece later this year. And meanwhile, U.S. universities like Princeton, the University of Virginia and NYU continue to expand their presence here.

I am excited about the momentum building in the U.S.-Greece relationship, and I am delighted that there is a growing constituency in Washington that now understands and appreciates Greece’s critical regional role.

My boss, Secretary of State Mike Pompeo, recently visited some of Greece’s central European neighbors, including Hungary, Slovakia, and Poland. There, he focused on the importance of our NATO alliance as well as the upcoming challenges and our commitment to helping the people of Europe remain free – especially as Russia and China compete with us for global influence. He also stressed the importance of protecting and strengthening democratic institutions throughout the Western world.

As Secretary of State Pompeo said in December in his press conference with Minister Katrougalos, the Strategic Dialogue capped a year of “historic progress” as our two countries “have turned opportunities into concrete achievements.”  “Greece has been a critical ally of the United States,” and “Now more than ever,” he added, “we are pleased to see Greece emerge once again as a leader — a pillar of regional stability in the Eastern Mediterranean.”

“The U.S.,” he reiterated, “is looking to strengthen our relationship with stable democracies and allies there, allies like Greece and Cyprus and Israel.” Secretary Pompeo then turned to Minister Katrougalos and reiterated that “The U.S. recognizes you as a key player in the region, and we want to thank you so much for being an excellent ally.”

So that’s what my boss said, and I think it sums up pretty well how we think about our relationship as Greece heads into an election year. So with that, I look forward to hearing from Minister Katrougalos, Shadow Minister Koumoutsakos and the discussion that follows.Ευχαριστώ πολύ.