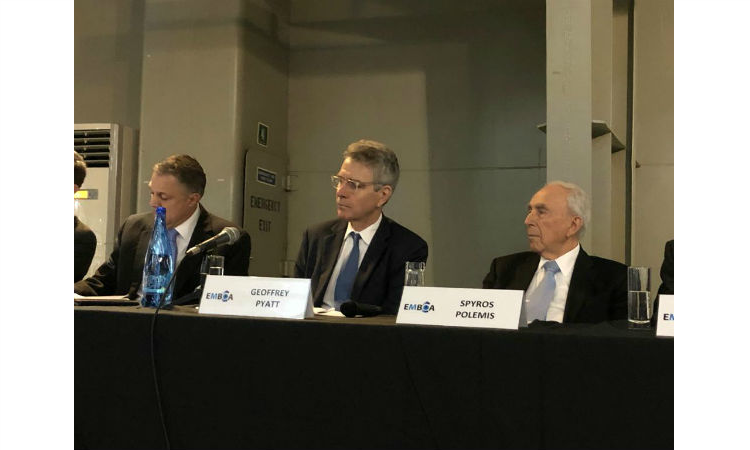 First of all, thank you for having me here tonight – Lou, Konstantine – all the founders of the East Mediterranean Business Cultural Alliance. I’m especially pleased and honored to be on a panel that includes so many friends and especially Admiral Pavlopoulos, who has done so much over the years to deepen and build the alliance between our maritime sectors.

I’m also glad to see here such a wide cross section of the Greek-American diaspora, but also the global shipping community.

I want to start by congratulating you on the initiative to create a memorial in New York to honor the sacrifices of the Hellenic Merchant Marine and Shipping Industry during WWII, and to commemorate U.S. support to Greece via the Marshall Plan’s Liberty Ships.

I am always happy to take part in events that shed a spotlight on an industry that has been so fundamental to the U.S.-Greece bilateral relationship.

When you look back at the aftermath of World War II, when the Greek fleet was decimated, it’s quite amazing the progress that’s been achieved so that today the Greek shipping fleet represents the largest non-military asset in the world for transporting goods.

And I must say, and I appreciate George’s remarks, that there is no better setting to reflect on the maritime ties between our two countries than here on board Hellas Liberty. Every time I visit I visit this ship, I am filled with pride at the testament this vessel bears to how the Marshall Plan replaced so many of the ships that Greece lost during the war and revitalized the Greek shipping industry so that it could roar back to the global leadership role that it enjoys today.

Over the past year the United States and the Embassy here have significantly increased our engagement with Greece in the maritime sector. Most importantly, I want to highlight tonight the first-ever delivery of U.S. liquefied natural gas to Greece and to the entire Balkan region, which took place last December. In that case, a Greek-flagged vessel from the Tsakos fleet brought the shipment from Corpus Christie, Texas to Revythousa, where it was one of the first to arrive at the newly expanded LNG terminal. And there’s a good chance, as we all shiver through this relatively cold weather in Athens this year that it’s U.S. gas helping to keep us warm.

In partnership with the Greek shipping fleet, the U.S. is helping Greece and all of Southeast Europe ensure energy independence. We anticipate more American LNG shipments coming through soon, and this is just one example of how Greece and the United States will continue to reap the benefits from the strong relationship between our businesses and governments, which serve the interests of Europe and the wider Mediterranean and Balkan regions.

We also celebrated over the past year U.S.-based ONEX Corporation’s major investment in the Neorion Shipyard on Syros. The role of U.S. innovation and technology in Greece’s shipping sector was also highlighted at the 2018 Thessaloniki International Fair where ONEX also announced its additional plans for other operations here in Greece.

Another notable step, which Senator Lou Raptakis actively supported, was the fact that in March 2018, the State University of New York and the National Merchant Marine Academy of Hydra signed an agreement for student exchanges between the two institutions. This is a fantastic initiative, and is a great example of the kind of educational partnerships that we will continue to grow. Our governments also recently reached an agreement on the mutual recognition of seamen certificates, and Minister Kouvelis and I have agreed that we will seek to build even more on cooperation between the U.S. and Hellenic coast guards. And as I was arriving tonight, I was thrilled to be greeted by a few of the cadets from the Hydra Academy, who are in a position to benefit from this exchange program.

Reflecting on these achievements and the progress that’s been made over the decades, I predict a very bright future for the Greek shipping sector, which stands out as one of the fastest growing parts of Greece’s economy.

I have often said that Greece acts as a pillar of stability. You in the audience tonight are key players in upholding this position as more of the Greek shipping industry serves as a stabilizing force in a region that is grappling with a range of geostrategic challenges. The shipping industry also serves as a daily reminder that Greece’s impact is global in scope and how Greece is a key factor in a region that stretches from the Black Sea to the Mediterranean to the Persian Gulf and beyond. In this room, I know we can all appreciate the importance of unimpeded shipping routes and the difficulties posed by unilateral actions that restrict peaceful maritime access.

In the December at the U.S.-Greece Strategic Dialogue, it was clear that Greece and the United States are united on these matters along with our other EU partners. We are also here to commend Greece as it assumes an increasing leadership role in resolving long-standing diplomatic issues in its neighborhood, and we affirm our common vision to integrate the countries of the region firmly in European and Euro-Atlantic institutions.

This week’s signature in Brussels of the accession protocol to NATO of the Republic of North Macedonia is a dramatic illustration of Greece’s diplomatic leadership – and a game changer in terms of perceptions of Greece’s regional role. We are confident that Greece will be one of the great beneficiaries of this agreement, as it will serve to stabilize the region and open up new trade and investment opportunities, reinforcing, in particular, Thessaloniki’s role as a commercial and logistics gateway to the wider Balkans.

So, in closing, I hope this event serves as a reminder of the strong ties between Greek and American shipping and maritime communities, which are deep and a longstanding part of bilateral relationship.

And I want to thank EMBCA for their leadership in that regard. I look forward to hearing the views of my fellow panelists and to answer your questions. Thank you very much.