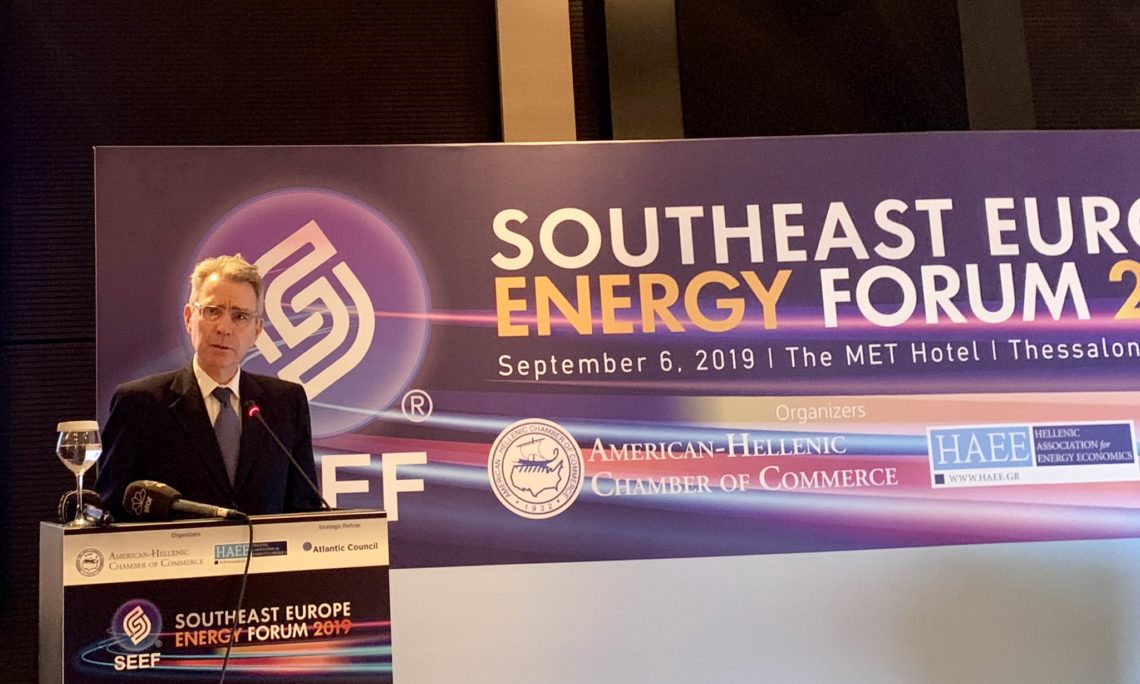 Ambassador Pyatt:  Καλημέρα σας.  Minister Thomas, friends, it is a great pleasure to be back in Thessaloniki at my third Southeast Europe Energy Forum.  I want to start by thanking Nikos, Elias, Alex and the American-Hellenic Chamber of Commerce as well as Kostas and the Hellenic Association for Energy Economics and David and my friends at the Atlantic Council for convening this discussion today, on the eve of the 84th Thessaloniki International Fair.

After the United States’ landmark success as Honored Country at TIF 2018, we are keeping our promise to maintain the momentum and continue building our relationship with northern Greece.  And just like last year, we’re kicking it off with this Energy Conference.

I was very glad yesterday to welcome Secretary of Commerce Wilbur Ross to Athens for a terrifically successful round of meetings focused on U.S. investment and trade opportunities in Greece.  The Secretary, who led our high-level government delegation to the TIF last year, will host a business roundtable lunch for Prime Minister Mitsotakis in New York on October 25th, capitalizing on the government’s recent progress and signaling strong U.S. government support for increased trade and investment, including here in northern Greece.

We are also continuing our strong support for the Greek startup sector with our partners at AmCham, Foundation, and Industry Disruptors, and we’re very glad to return to the Thessaloniki Fair this year and join India’s celebration as Honored Country.

Our renewed presence at TIF 2019 will focus on sharing U.S. experiences and expertise in entrepreneurship, innovation, and technology.

Our continued presence at TIF also supports major pillars of the upcoming U.S.-Greece Strategic Dialogue with Secretary Pompeo in October, especially in the areas of energy, trade and investment, and people-to-people ties.

Last year’s TIF made clear that northern Greece and Thessaloniki in particular is reestablishing its role as the commercial and energy hub of the Balkans.

I remember speaking at the first iteration of this forum in Alexandroupoli not long after I arrived in Greece, and since then with the increased tempo of our military engagement and our strides on energy investments, Alexandroupoli is emerging as an important link to European energy security, regional stability, and economic growth.

As I hope you’ve noticed, there is a clear strategic logic to our engagement in Alexandroupoli.  That’s why we are working with the Greek government on a $2.3 million project funded by the U.S. Army to remove the sunken dredger Olga from the port of Alexandroupolis, making that port a more usable and valuable asset for Greece.  Removing the Olga will expand the port’s ability to support our bilateral and NATO military activities but also increase its attractiveness for commercial and investment opportunities.

This work will enable the utilization of the port’s full capacity, improving access and flexibility for commercial endeavors and military movements, such as the recent U.S. Army Europe-led, multinational exercise Saber Guardian.

Next week after TIF, I will be back in Alexandroupoli for an update on that project and to highlight U.S. interest in future privatization opportunities there and the nexus between the port, the FSRU and other regional infrastructure.

Our energy cooperation is one of the real bright spots of the U.S.-Greece agenda and we have prioritized that aspect of our relationship after the new government came into office on July 8th.  I was, of course, delighted that my friend Minister Hatzidakis was able to meet his American counterpart Secretary Perry in Cairo just a few weeks after taking office.

And we kept up the pace in August, when State Department Assistant Secretary for Energy Resources Frank Fannon returned to Athens for a 3+1 Ministerial Meeting, the first U.S.-Greece Strategic Dialogue Energy Working Group meeting, and meetings with other Greek energy stakeholders in the public and private sectors.  I know Assistant Secretary Fannon greatly appreciated his engagement with AmCham as did Secretary Ross who also prioritized energy in his discussions on Wednesday and Thursday.

This intensive engagement is part of a considered strategy.  Greece has become one of our most important partners in advancing the United States agenda for European energy security and diversification.

Part of this story, naturally, is about U.S. LNG exports which have become the new normal here in Greece and are reshaping global energy markets.  But there is also a big strategic and security agenda behind this effort.

Just as the European Coal and Steel community created a supranational organization based on energy cooperation between like-minded democratic nations after World War II, we believe that the 3+1 framework between Greece, Israel, Cyprus, and the United States has the potential, likewise, to transform rhetorical support between our democratic nations into active political and economic cooperation.

As the world leader on many of these issues, the United States will engage government and private sector experts to continue cooperation in the 3+1 framework and to share American experience and expertise with our three democratic friends.

In preparation for the second round of the U.S.-Greece Strategic Dialogue in October, Assistant Secretary Fannon also participated in an Energy Working Group meeting with Deputy Foreign Minister Fragogiannis and Deputy Energy Minister Thomas.

In this meeting at the MFA and the Energy Ministry we agreed to work with our Embassy to identify investment opportunities in the energy sector that will help to lay the foundation for Prime Minister Mitsotakis’ visit to New York.  These are perfect opportunities to show American investors that Greece is ripe for new capital including in areas like renewables and energy storage where American technology leads the world.

As Secretary Ross underlined yesterday, we are very encouraged by the ambitious program that Prime Minister Mitsotakis has unveiled to cut through red tape, digitize government, and attract direct foreign investment to boost the Greek economy.

I have met with nearly all of the new ministers now.  Leaders with significant experience in the private sector and abroad.  And I can say with great confidence that from an American perspective the time to invest in Greece is now.  I know that Prime Minister Mitsotakis and his team are fully committed to working with the private sector and moving forward with reforms, and have the intention to exceed expectations and demonstrate results as quickly as possible.

For this reason, we commend the new government’s enthusiasm for the offshore exploration permit granted to ExxonMobil, Total, and Hellenic Petroleum, and we look forward to the rapid ratification in the Greek Parliament.  We believe that offshore exploration here in Greece holds great potential, and what better partner to help Greece grow its economy than ExxonMobil, the world’s largest publicly traded petroleum and petrochemical enterprise?

Similarly, we appreciate the government’s commitment to streamline the process for obtaining renewable energy permits and to create a level and transparent playing field for investors.

American companies have much to offer Greece in this domain including the very best in American technology, capital, and sustainable, environmentally friendly practices as exemplified by the new GE wind energy park I helped to inaugurate in Kato Lakomata.

The government’s planned roadmap for renewable permit auctions, the consolidation of foreign direct investment-related branches under a new one-stop service in the Foreign Ministry, and the ratification of the ExxonMobil permit will send the positive signals that American investors have been waiting for.  I am confident that American investment will play a crucial role in Greece’s energy future, including upcoming privatizations like that of Hellenic Petroleum.

The United States is grateful for Greece’s leadership as the guardian and regional integrator of European energy security and diversification.  With the 4.5 billion euro Trans Adriatic Pipeline close to completion and the construction of the Gas Interconnector Greece-Bulgaria commencing shortly, energy projects are driving opportunities in northern Greece, creating jobs while enhancing Greece’s regional role.

Additional opportunities like improved energy interconnection with North Macedonia, new infrastructure like the East Med pipeline, and enhanced natural gas capacity like the FSRU in Alexandroupoli will consolidate Greece’s position as a leader in regional energy diversification.

Finally, and especially with our Atlantic Council partners here, I want to make a plug for Greece’s involvement in the Three Seas Initiative, which Acting State Department Assistant Secretary Reeker advocated with our European partners during the Three Seas Summit in Slovenia last June.

Consistent with Greece’s participation in the 3+1 and the East Med Gas Forum, the Three Seas Initiative seeks to strengthen regional coordination among EU member states on north-south energy, transportation, and communications corridors.

Greece has been very active in bridging the flow of energy from east to west, and the Three Seas Initiative presents Greece with an additional strategic opportunity to collaborate with the United States and its EU partners from Central and Eastern Europe.  As I have discussed with Minister Karamanlis and others, participation in the Three Seas Initiative promises Greece additional investment opportunities in business, logistical connections, energy infrastructure, and digital communications.

As U.S. Energy Secretary Perry said, Greece is a natural fit in this forum.  The Three Seas Initiative connects the Adriatic, Baltic, and Black Seas, and Greece, with its geostrategic position in Southeastern Europe, can double that number of connections, offering access to the Aegean, Mediterranean, and Ionian.

To conclude, the energy economy will undoubtedly play a significant role in Greece’s future and the future of northern Greece in particular, and the United States will remain Greece’s committed advocate and partner in this sector.

Our renewed engagement at this year’s Thessaloniki International Fair is just one more way the United States is keeping its promise to northern Greece, and I look forward to building that momentum over the next few days.  Ευχαριστώ πολύ.