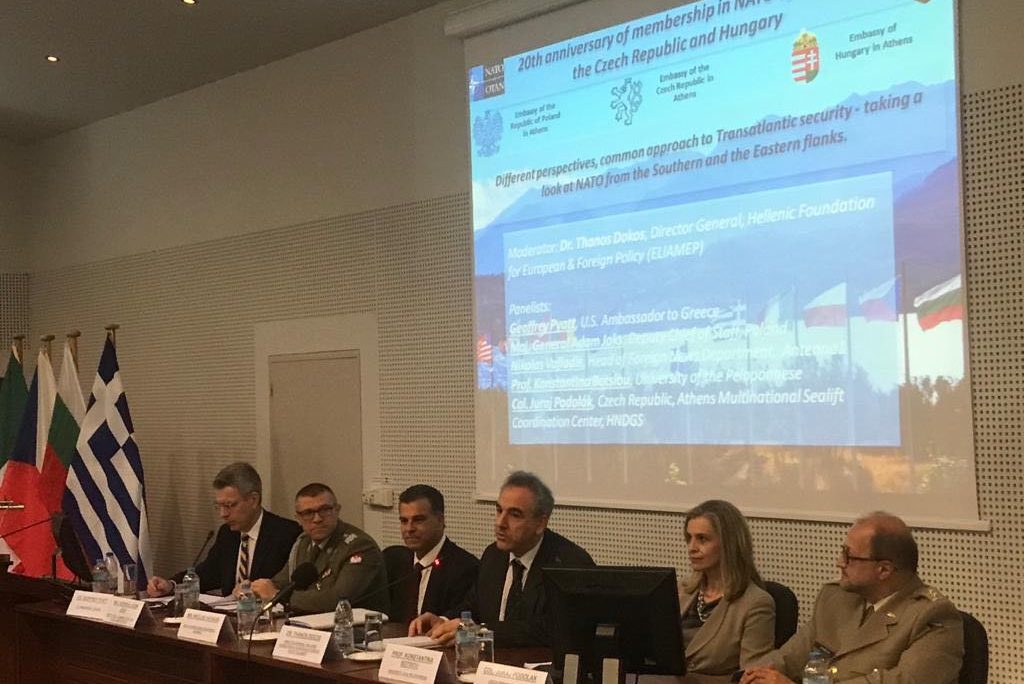 Kalimera. And thanks to Commodore Kostalas for hosting us here at NMIOTC. It’s a great honor to have General Christodoulou here with us today.

As well as all my distinguished co-panelists and particularly the Ambassadors of Poland, Hungary and Czech Republic.

Thank you for organizing this event, which is a welcome opportunity for celebration and reflection. I am always very happy to be at NSA Souda Bay, but it is particularly good to be here to help mark the 20th anniversary of your three countries’ membership in NATO.

I’ve often spoken about Greece’s geostrategic importance as a southern NATO Ally, as a pillar of regional stability, and as an exporter of security. This dynamic is well understood by America’s military leaders as reflected in the frequent visits of our EUCOM leadership, including NAVEUR Commander Admiral Foggo, who was here at Souda Bay earlier this week in his NATO capacity.

During my time as U.S. Ambassador to Ukraine I saw first-hand that NATO unity matters greatly. Russia’s aggressive actions in Ukraine and occupied Crimea over the past five years have made crystal clear the challenge we face to our shared vision of a stable, secure, and free Europe. Niko’s excellent reporting for Antenna TV from Ukraine for the 5th anniversary of the Maidan captured the situation well, especially for the Greek community in Mariupol.

The theme of today’s panel is important. We must continue to stress that there should be no “either-or” debate about protecting NATO’s eastern and southern flanks. History teaches us that what happens in the Black Sea directly affects countries bordering the Aegean and Mediterranean. Similarly, we all see the need for a coordinated response —not just in military terms, but through increased trade, economic development, energy diversification, and people-to-people engagement.

All are ingredients that are necessary to preserve our collective security.

And that’s why Greece is so important, because it links geographically the Balkans, Turkey, the Middle East, Northern Africa, and Western Europe. So I welcome the opportunity to talk about why we need to work together to preempt any discussion of “east versus south.” Instead, we should look for ways to build together an arc of stability that goes from the Baltics to the Black Sea and on to the Mediterranean.

The good news is that we’re making progress. As U.S. Ambassador to the Hellenic Republic, I’ve had a
front-row seat over the past three years to see how Greece has used its emergence from economic crisis to take a leadership role in a way that helps to stabilize the wider region.

A clear example of this is the door that has opened with Athens’ ratification of the Prespes Agreement, thanks to which we are now in the process of bringing North Macedonia into our Alliance as NATO’s 30th member.

I’m sure there are many lessons that Poland, Hungary, and the Czech Republic can offer as this NATO accession process moves forward. I’ve also been very pleased to see how rapidly political and military leaders in Greece and North Macedonia have come together since the approval of the Prespes Agreement to discuss closer ties.

With each step that we take toward welcoming North Macedonia into NATO, and hopefully one day into the EU, we strengthen the foundation that makes it easier to trade, to grow economically, and to build stability. This progress also makes it easier to refute the fake narratives of division that other countries use to sew instability.

The United States believes that the Prespes Agreement has opened up opportunities for progress in moving all of the countries of the Western Balkans further along the path towards Euro-Atlantic institutions.

Another step forward has come in the form of new multilateral cooperation. One important example is the Black Sea Quadrilateral, with Greece, Bulgaria, Romania, and Serbia. In the very near future, my boss, Secretary of State Pompeo, will join the leaders of Greece, Cyprus, and Israel to coordinate important security, economic development, and energy issues as part of our new “3+1” dialogue.

On energy, I’d be remiss if I didn’t mention the remarkable progress we’ve seen over the past few years, which is directly linked to the regional security agenda.
We welcome the completion of the TAP Gas Pipeline – the last leg of the Southern Corridor – and the expansion of the Revithoussa terminal which has facilitated new US LNG deliveries. Work on the Greece-Bulgaria Interconnector is set to begin in the next few months and plans for a floating storage and regasification unit in Alexandroupolis are moving forward – both key components of a vertical corridor connecting Central Europe to non-Russian sources of energy.

Together, these projects are unlocking the Balkan energy island for the countries that are today 100 percent dependent on Gazprom and vulnerable to Russia’s use of energy as a political weapon. In this regard, I was glad to hear from the Atlantic Council delegation that was recently in Athens their strong support for adding Greece into the “Three Seas” Initiative.

I also want to recognize how fitting it is that we have gathered for this event at NMIOTC here in Souda Bay. These institutions are emblematic of the good things that happen when NATO Allies and Partners, work together.
NSA Souda Bay remains the flagship of the U.S.-Greece bilateral defense relationship, and I’m very pleased to see how our work together has contributed to regional stability by increasing maritime domain awareness and counterterrorism coordination. We are very grateful for the strong support of Minister Apostolakis and General Christodoulou in this regard.

And, I can tell you, when I speak with my political leadership in Washington or in the US Congress, our cooperation at Souda Bay is
always at the top of the agenda.

NMIOTC does not get as much attention as it deserves as a platform that supports EU and NATO allies and partner nations through training in defense, law enforcement, and counterterrorism cooperation. NMIOTC is unique in that it has also helped many nations that are not members of the NATO alliance, including from the Partnership for Peace, Mediterranean Dialogue, and the Istanbul Cooperation Initiative.

The work that the NMIOTC is doing is vitally important, and shows the benefits of institutionalizing cooperation among NATO Allies, and then reaching beyond to increase stability. It also highlights Greece’s important role as a geopolitical crossroads, and a facilitator of dialogue.

So this setting reflects both the importance of the Alliance to regional security and the importance of Greece as a leader in NATO. Really, as my colleague Anna (inaudible) it’s an ideal location to celebrate both NATO, which turns 70 this year, as well as one of its important expansions as we welcomed Poland, the Czech Republic, and Hungary 20 years ago—and to note how in that time they have all become important contributors to the Alliance.

There’s much more to say, of course, and I’ll look forward to further discussion, but for now I want to focus on the progress we’re seeing among NATO Allies and the potential to do more as we work together to meet emerging challenges.

Doing forward, there’s no doubt that we are stronger together, and that the United States remains absolutely committed to our NATO Alliance.

Thank you very much.
Ευχαριστώ πολύ.