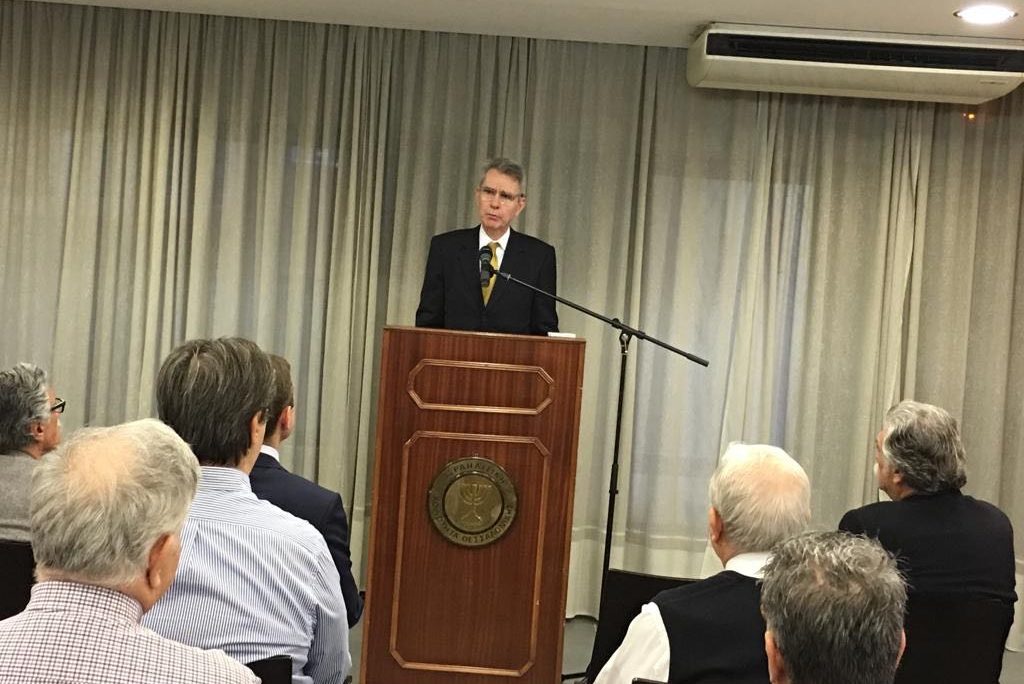 Καλησπέρα σας. President Saltiel, David, Dr. Nar, dear guests and friends, this is my third time as Ambassador to Greece that I have had the honor to open this event organized by the Consulate in Thessaloniki to honor the memory of our former colleague David Tiano.

I want to begin by thanking all of you for being here and joining us in this event, and in particular thank my friend David for allowing us to hold it here at this facility.

Through the Tiano lecture series, the U.S. Consulate General in Thessaloniki has sought to preserve the memory of our colleague who was executed by the Nazis in 1942, using his story to create a dialogue and further education about the Holocaust and the history of Thessaloniki’s once vibrant Jewish Community.

Two years ago, when I was here, I recall the lecture took on the difficult topic of anti-Semitism in Greece and the important role that educational institutions and museums can play in combatting this.

In this context, I was honored last fall to join former Minister of Defense Kammenos and General Symeonidis at the U.S. Holocaust Memorial in Washington where we received the Greek government’s commitment to a close partnership with that institution’s mission of education and collective memory.

Recent acts of intolerance in Thessaloniki, including at the Jewish Cemetery Memorial, which, as David noted, I visited earlier today, remind us that we can always do more. We can provide more education, more information, undertake more efforts to remember those who perished and raise our voices against hate and oppression.

Last year, I remember hearing the story of Danny Bennahmias, a survivor from Auschwitz, and the new life he created for himself in Oakland, California. And I was glad to see Dr. Bouroutis here, who was our presenter last year. Thank you for joining us again.

I personally will always remember Danny’s amazing will for life, and his courage in providing testimony for the Shoah Foundation about everything that he had witnessed in the concentration camps.

As the years pass, we must continue to carry this torch and work to maintain the memory of this hideous crime against humanity for new generations.

As I discussed today with Mayor Boutaris, the establishment of the Holocaust Museum and Educational Center here in Thessaloniki is an important step in that direction. The United States is pleased to see that project moving along with support from both the Greek government and our partners at the Stavros Niarchos Foundation.

I consider it a deep honor as American Ambassador that we organize this annual lecture and contribute our small piece here in Thessaloniki to raising awareness, to never forgetting the victims of the Holocaust and to never allowing such a crime to happen again.

The United States is a member of the International Holocaust Remembrance Alliance, a task force that joins 31 nations, with a mission of encouraging activities that strengthen the moral commitment of societies and combats Holocaust denial and antisemitism. We look forward to Greece’s first-ever presidency of the international alliance in 2021, your bicentennial year.

As we honor the Holocaust survivors and their children who are part of Greek society, it is our duty to keep their memory alive. We have a responsibility to honor them, to respect their courage. For, their courage gives us strength. Their voices inspire us.

This year, our thirteenth annual Tiano lecture, our guest speaker is someone whom I know many of you know very well: Dr. Leon Nar. Dr. Nar is a post-doctoral researcher at the University of Macedonia, and – I was glad to learn as well – an instructor at Anatolia College, and he will speak with us about survivors returning to Thessaloniki after the Holocaust, the situations they faced upon coming back to a city that had changed completely.

I also look forward, as I hope you all do, to learning more about this chapter in the history of this great cosmopolitan city.

This is why we are here today – to remember, to learn, and to bear witness. To make sure, Never Again. Ευχαριστώ πολύ.