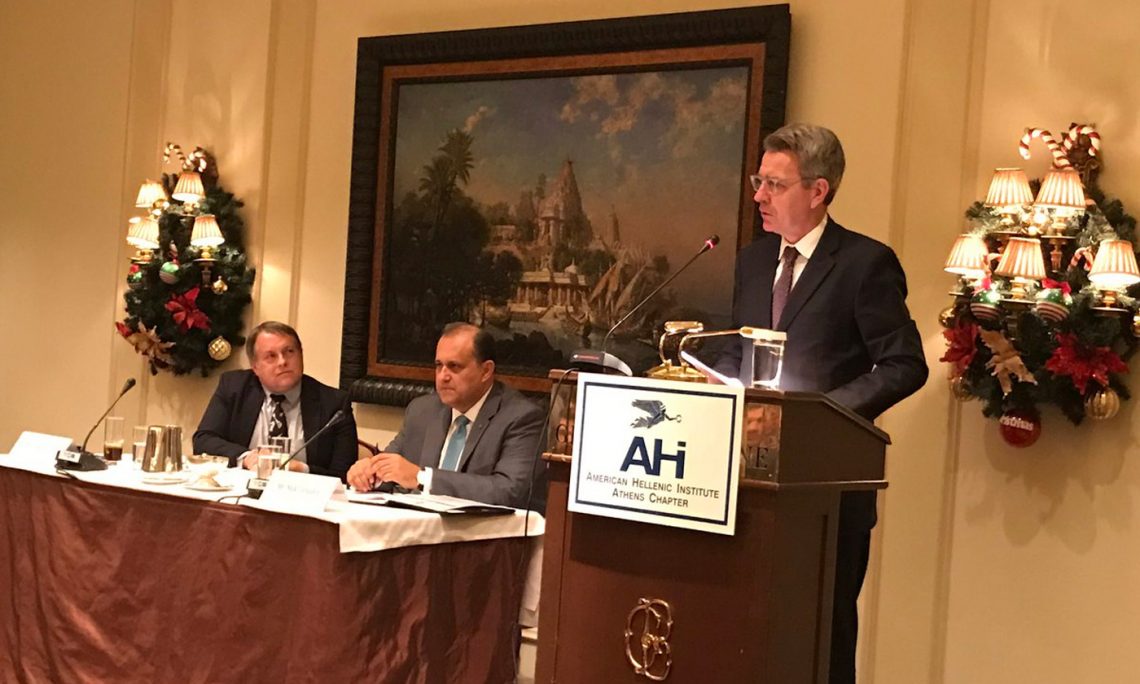 Thank you, Nick.  Καλησπέρα.   Good evening everybody.  It’s a great pleasure for me to be here both because of the value that I place on the work of the American Hellenic Institute but also because of the value that I place on my partnership with Nick.  And I would say that even if he didn’t say all those nice things about me!  He’s a real fixture in the U.S.-Greek relationship.  His office in Washington is a mandatory stop for everybody who matters in our bilateral relationship.  And he’s been a frequent visitor, even during my two months, two and a half months, in Athens since he was part of the relatively small group of representatives of the diaspora who were invited to join President Obama for our State Dinner and for the rest of what was, I think we all can agree, a truly historic visit.

But the American Hellenic Institute has a very long history of advocating for Greece, advocating for the Greece-U.S. relationship,  and promoting, as Nick said, a vision of this relationship which is grounded both in our NATO alliance, our shared values, our shared interests, but also the importance of Greece as a pillar of stability in this region, as a country which occupies a strategically significant part of the Eastern Mediterranean and which has been a longstanding partner of the United States.  An ally, a friend, and a reliable partner as we seek to build a Europe whole, free, and at peace.

I have seen, in a very pronounced way, over my first two months in Athens, how important the people-to-people relationship between our two countries is.  And how fortunate I am to be working on a relationship where the diaspora figures so importantly.  And so groups like AHI help to build those ties, they help to reinforce the communications between our two governments, and I am personally committed to continuing to support and strengthen that channel of communications.

As President Obama made clear, the United States appreciates the challenges that Greece and the Greek people have faced over the past few years and we are committed to standing with you, working with you, working with our European allies to help build a foundation for sustained and sustainable growth and helping the Greek people to fulfill the great potential of this country – to expand opportunities for investment, to develop our bilateral economic partnerships, our people-to-people ties, and to help diversify Greek energy sources, which is such an important part of the strategic agenda that I bring to this job.

I want to note, also, the importance of the partnership between the United States and Greece in combatting ISIL.  As long-time NATO allies, the United States and Greece remain committed to enhancing regional security, bolstering our defense cooperation.  It is not a coincidence that my very first trip after coming to this country was to go down to Souda Bay and to see what our navies and our air force are doing together every single day to build security in this part of the world.

Nick, I look to Nick and his colleagues as allies as we work in Washington to help educate people about the importance of that strategic relationship, to ensure that those military ties are resourced including through programs like our Military Education Training, which is so important to building the next generation of Greek military officers who are familiar with and understand the culture of the American military.

But there are many other areas of cooperation between our two countries that we all can be proud of.  I’m extremely proud of the way we’ve worked together as Greece has tackled the migrant challenge.  President Obama reminded us at the Niarchos Center of the debt that we all owe to Greece for the gift of democracy, democratic politics that this city that we live in has granted to the world.

And that’s why the work of AHI is so important.  AHI gives voice to individual citizens.  As President Obama himself said at the Niarchos Center, the most important title in democracy is ‘citizen’.  And so these citizen-to-citizen ties that AHI is committed to building are so, so important and I will continue to work in support of that.

As we go through a transition in Washington to a new administration there are certainly going to be changes. But one thing that I am confident will remain constant is our commitment to the NATO alliance and our alliance with Greece.  I am confident that Greece and the United States will continue to share the same fundamental goals of regional stability, returning Europe to economic prosperity.  And I am sure that AHI will remain effective in engaging lawmakers, from both sides of the aisle, in Congress and beyond, to help build this partnership.

Our democracy is stronger because of civic society groups like AHI.  And I should say, Nick, as Ambassador, I am deeply grateful for the support and partnership that I have enjoyed with you and your organization.  Your commitment to strengthening ties between our two countries embodies the values of active citizenship that Pericles described and that President Obama reiterated when he was speaking at the Niarchos Center.  Both our countries are better because of the work that you do.  So, I look forward to learning more tonight about what we all anticipate for the transition in Washington and I very much thank you for having Mary and me with us this evening.