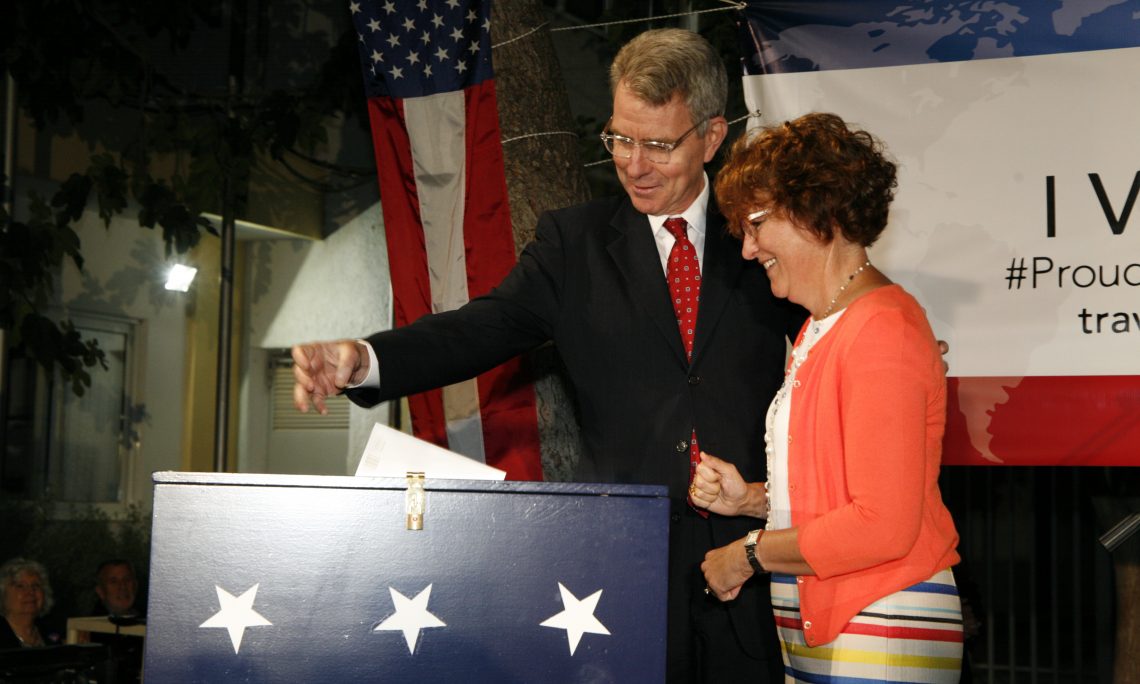 Good evening everybody.  Thank you, Director Gialamas, for that very gracious introduction.  I also want to say thank you to Rosemary and the whole team from our Consular Section.  They do great, great work and I know they put a lot of effort into this evening’s event so thank you guys; you make us all very proud.

As the Director said, my wife Mary and I have been in Greece about two weeks now.  In many ways like we have come home.  We’re both from Southern California.  I grew up in San Diego, Mary and I met in Orange County.  There’s no part of the United States that feels more like Athens, especially this time of year, than the Orange County, San Diego County area.  We’ve been made to feel extremely welcome.

I’ve already traveled to Crete, I was there last week.  I look forward to travelling up to Thessaloniki later this month.  I want to spend a lot of time, in these first weeks here in Greece, listening, learning, trying to understand the opportunities to deepen the really important alliance between our two countries.

Of course, one of the strongest parts of the relationship between the United States and Greece is the people-to-people relationship.  So many of you who are here today are part of that.  I’m extremely excited to be representing the United States in a country like Greece that has such a strong history of individual people-to-people ties between our two countries.  I promise you that one of my highest priorities, as American Ambassador, will be service to our American citizen community.

When President Obama nominated me to be Ambassador here to Greece, he entrusted me to ensure that our Embassy remains open and accessible to American citizens, to American business.  I intend to take that responsibility very seriously and ensure that the doors of the Embassy and that my Embassy team is always open to all of you.

As I went through the confirmation process in the U.S. Senate this summer, I benefited from the fact that there’s a very strong bipartisan, Republican and Democratic, consensus in the United States in support of our alliance with Greece, in recognition of the challenges that the people of Greece are confronting, and supporting the idea that the United States needs to be doing as much as possible to support Greece as it works through these challenging days.

One of the benefits of serving in a county that enjoys this kind of bipartisan support is that I was able to get through the confirmation process relatively quickly which means that I have the extraordinary honor of being American Ambassador in Greece, in the country that gave birth to the idea of representative democracy.  So that’s kind of neat and a really unique honor.  This idea of representation, “rule by the people”, is so, so important to what makes our country great, but it’s also something that we hold deeply in common with the people of Greece.

I would encourage you, if you didn’t read them, look at what President Obama had to say on this topic a week or two ago when he was at the United Nations General Assembly in New York because it’s really important.  He made the point that those of us who believe in democracy need to speak out forcefully, because both the facts and history are on our side.  That doesn’t mean democracies are without flaws.  We all know that from our own country’s experience.  But it does mean that the cure for what ails our democracies is greater engagement by our citizens – not less.  And all of you are part of that process.

In this regard, I think the experience of Greece over the last few years has a lesson for all of us.  Of course, Greece has faced big challenges, big changes, over the past few years.   But the democratic institutions of this country have functioned, without interruption.  And that’s something that’s worth remembering as Greece has passed through this series of crises.  To me, this shows both the remarkable resilience of the Greek people, which has been demonstrated so many times, something for which Greece and the people of Greece deserve great credit.  But it also demonstrates the enduring power of democracy – something that was driven home for me in a deeply personal way by my experience in Ukraine during that country’s Maidan revolution when tens and hundreds of thousands of people put it all on the line to defend their democratic rights.

Tonight, as we exercise our right and privilege as American citizens to vote, we need to remember that participating in an election is a tremendous opportunity that too many people around the world still don’t have.  I, as an American, am extremely proud and grateful to have this right.  Although it might seem like a simple process – dropping a piece of paper in a box – it is critically important.  Voting is an opportunity for us, as individual citizens, to shape our country’s future and to reenergize the ability of our Republic to continue leading the world towards a better future.

As Americans, we are all fortunate that we can cast our votes no matter where we are, including overseas.  For the millions of American voters, including many of you who are here today, who are such an important part of our globally connected economy, it’s not without importance that you are able to contribute to the growth of our democratic system.

These democratic values, as I said in my confirmation statement, are the bedrock of our relationship with Greece and have been, as President Obama also pointed out in New York, the key to the further improvement and perfection of our own government in the United States.  So I hope that in casting our ballots this evening we will all take a moment to reflect on the importance of this exercise, on the changes that our own country is going through, and the message of hope that our country continues to send around the world – something that I am deeply, deeply appreciative of.

So I thank you all for joining us this evening as we celebrate America’s democratic process, which finds its inspiration in this city, Athens, where we all live – something that’s worth bearing in mind.  Thank you, and now I think we’re going to have the most important part of this transaction.

I am assured by Rosemary and the team that our ballots are all going to be mailed to the United States, they’ll be received by local voting officials throughout the United States, and they will be counted in the 2016 elections.  And I don’t know about all of you but I can promise I’m going to stay up to see how it all turns out!

So let me ask my wife Mary, who is the most dynamic part of the American diplomatic representation in Greece, to come up and join me.  And now we do the important part!