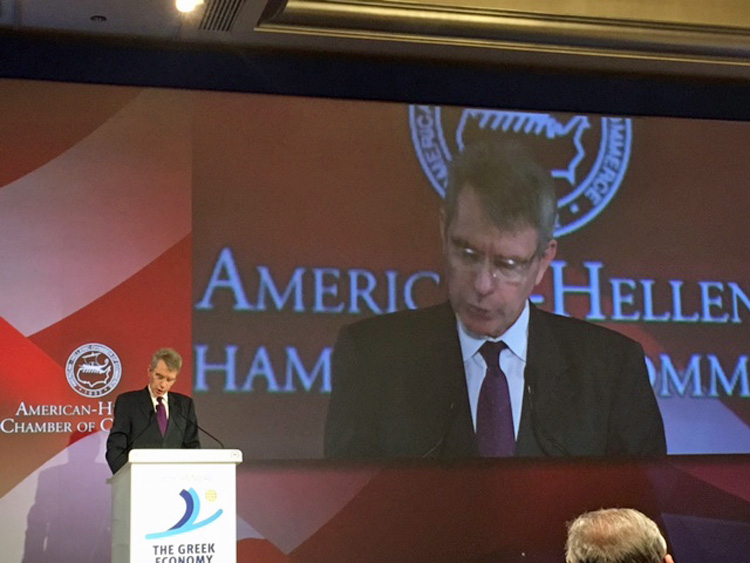 Elias, Simos thank you very much for having me here today. It’s a tremendous honor to speak especially with Deputy Minister Dragasakis here. Someone who has been a strong supporter of our alliance.  I cannot overstate the importance of our partnership with the Hellenic American Chamber of Commerce and the work you have done in helping me and our Embassy team strengthen the U.S. – Greece economic relationship. With this important conference the Chamber is bringing top policy makers in touch with the business world and advancing our goal of seeing Greece emerge from its near decade-long crisis and rejoin global economic markets as soon as possible.

Thank you also for the work the American Hellenic Chamber of Commerce has already done in promoting the United States’ role as the honored country at the Thessaloniki International Fair. You have gotten us and the Greek government focused very intensively on this project. Our close collaboration has aligned how we can best use TIF as a platform to underline the message of Greek receptivity to American innovation, and to American investment. It is also helping us get the message out in the United States that Greece is coming back, that the economy has begun to turn around, and that there are real opportunities here.

We meet today at a moment of notable optimism. US-Greek relations are stronger than they have been in many years, and we’ve seen increasingly positive signs about Greece’s return to markets, including the performance of the recent debt swap. The news on Saturday that Greece reached – on schedule – a Staff Level Agreement for the latest bailout review shows us how far things have come on the reform agenda and the massive fiscal and policy adjustments Greece has managed with the support of many of the people in the room today.

So now, we’re at a critical moment. Over the last five years, Greece has taken substantial steps toward reforming its economy and returning the country to sustainable growth. That has taken a commitment to reform from multiple governments and great resilience from the people of Greece. That’s something that has most stuck with me over my first year and a half here, the resilient Greece citizenry, and the courage and determination that I’ve seen in the business community, and particularly among young people and entrepreneurs.

2018 could really be a turning point for the Greek economy, but that depends on creating the right investment conditions.  And, to a large extent, I think that also depends both on the realization of the message the Greek government delegation brought to Chicago and Washington, a message the Prime Minister repeatedly hammered home, namely that Greece is back, it’s open for business, that the Greek government is committed to taking the steps necessary to attract investment, particularly American investment.

And, so, where are we now?  I have more American companies coming to see me at the Embassy right now than at any time since I arrived in Athens.  American investors are taking a new look at Greece.  Now, it’s up to the government to sustain the message Prime Minister Tsipras conveyed when he was in the U.S. about investment, openness and predictability – creating an environment that allows for economic growth.

Whether it’s interest in a Hollywood-style film studio on Syros, or interest in the Alexandroupoli port privatization, in civil aviation, tourism related services or the Syros shipyards, big American investors and companies are looking for ways to partner with Greek companies and take advantage of the value proposition that Greece represents.

I recently visited Mytilineos’ facility near Delphi, and it was amazing for me to see how Mytilineos is working with GE on what they’ve called a digital smelter, which takes the big data from the smelting process to provide constant feedback for predictive maintenance of the smelting line and optimizing inputs.  It’s very important also, too, that this is happening in Greece, that GE chose this facility among all partners around the world  as their partner to develop this digital smelter because they knew they had a strong partner here.  Likewise, GE recently signed an EPC deal with Mytilineos for a power plant in Libya that will help this country modernize a critical sector of its economy.

This partnership is a reminder that our cooperation is not just about deals in the U.S. or in Greece but about global competitiveness and how our companies together can drive growth and achieve commercial success.

Another sector I think is not sufficiently heralded in Greece is entrepreneurship and startups.  It’s one of the great untold success stories of Greece, and for my part, I’m committed to doing all I can to help sustain it.  I’ve seen it in Patras, I’ve seen it in Heraklion, I’ve seen it here in Athens, and I’ve seen it in Thessaloniki: highly competitive start-ups with innovative ideas, leveraging the strong human capital that Greece enjoys to deliver products that are globally relevant.

We have done what we can at the Embassy with mentorship, establishing bridges to start-up successes in the U.S., creating opportunities for building networks and partnerships.

It was a very positive signal when the Prime Minister was in Chicago that one of his meetings, where I joined, was at the 1871 incubator, supported by the biggest companies in the Midwest, but creating an environment for American start-ups to find financing, get advice, seek mentorship.  It’s a very relevant model, and I hope we’ll see more in Greece.

The success that Greek entrepreneurs have enjoyed in the United States proves that there is enormous potential here if you can just create the proper surrounding ecosystem of laws and regulations and governmental attitudes.  And I think there’s been progress in governmental attitudes, that the government has come a long way, but when I meet with entrepreneurs and ask them what they need from the government, they universally tell me that what they most need is for the bureaucracy to stay out of the way.  Let us do our business.  That’s a new mindset, and one that still might take time to take root, but support for this sector is a top priority for U.S. Embassy.

I also want to highlight the energy sector, where President Trump to PM Tsipras emphasized American commitment and optimism for Greece’s economic recovery.  Secretary of State Tillerson also highlighted this energy issue during his speech on European policy at the Wilson Center last week.

Greece is at the tipping point in terms of establishing itself as a major European energy hub.  You see that in terms of gas, pipelines, projects like TAP, the FSRU in Alexandroupoli, the upgraded Revithousa terminal I visited last week, and the Greece Bulgaria Interconnector.  You also see it in upstream projects now moving forward, in the hydrocarbon sector, but also renewables where we have increased interest recently from big American companies like General Electric.

I was very glad to hear European Commission Vice President Šefčovič’s remarks at the recent Greek Energy Forum here in Athens.  Our speeches were nearly mirror images of each other and showed the real convergence of interests on energy issues between Europe and the U.S.  We agreed on the importance of energy diversification, on Greece’s regional role, and a point that the Prime Minister made in the U.S., which is that, in looking at energy diversification in Europe, almost every major new energy route coming into Europe will pass through Greece.  So the policies and practices that the Greek government will put into place are critical not just for this country but for the larger vision of European energy security and diversification.

The IGB Interconnector for instance, has the potential to open up the whole Balkan energy island, using Greece as the entry point to get away from the current dependence on monopoly suppliers that characterizes many of the Balkan countries.

Energy is an obvious area of growth.  There is clear interest from American companies, and I’m also encouraged that there is such a convergence between U.S. and Greek policy views on this critical sector.  We’re also focused on American LNG exports and comments also made by the Greek government in promising that Greece will be the third European country to begin importing American LNG, after Poland and Lithuania.

Privatizations will create other opportunities, and we have encouraged the Greek government in its efforts to further privatize, whether you’re looking at DEFSA or other Greek power entities or at long outstanding projects like Hellenikon.  I continue to emphasize that American companies bring transparency and  high standards of corporate governance, and they are looking for the same from their Greek partners.  And it’s my hope that Greece will recognize those positive attributes.  We have seen the difficulties privatization faces in Greece, as in the Thessaloniki port, where it’s unclear who the private investors actually are and where their money comes from.

There have been some success stories in this area.  One, that I think many people here experience on a regular basis, is Fraport and what’s happened with the airports and the improvements taking place in terms of efficiencies and how Greece’s civil aviation industry operates.  I hope that during my tenure here we will see similar progress on some of the other key privatizations that have been outstanding for too long.

As I mentioned at the start of my speech, 2018 is going to be a big year for the United States in Greece, given our role in the Thessaloniki International Fair.  Together with the American Hellenic Chamber, we are intensively preparing.

I’ll be speaking to many of the companies here to discuss partnerships and how we can make the TIF reflect the quality and depth of our economic relationship.  We see it as a flagship opportunity for us to show the best of American technology, innovation, and culture, to strengthen American support for Greece’s economic recovery, and to emphasize America’s commitment to northern Greece in particular.  We want to underscore Greece as an important economic opportunity for American investment and where its most promising sectors are.

Next week, I will be headed back to the U.S. with Minister Tsakalotos, Minister Papadimitriou and other officials to the 19th Capital Link Invest in Greece Forum, in NY where I expect to continue many of the conversations we started with top U.S. firms in Chicago and in Washington on possibilities for investment in Greece and for possibilities to partner with the U.S. delegation coming to TIF next year.

This trip will be an opportunity for the Greek government to continue the messaging the Prime Minister did effectively in October.

So, I have every reason to be optimistic, that we won’t just rest on the success we had in October but really build on it so that 2018 will be a real turning point for Greece’s economy and as a watershed year for our bilateral economic relationship.  And, I know AmCham and our American companies, will be a leading force in that regard.

We’ve created a bilateral investment committee chaired by Secretary of Commerce Wilbur Ross and Economy Minister Papadimitriou with a working group here in Athens.  We intend to use this platform to help build on the positive momentum of the Prime Minister’s visit to the United States by making sure that concerns from American companies are quickly brought to the top of the Greek government and to unblock the bureaucracy so that we can move ahead.  We want to make sure that policy makers are connected to the business world so that they understand the reality of what’s happening on the ground and what we need to drive growth forward.