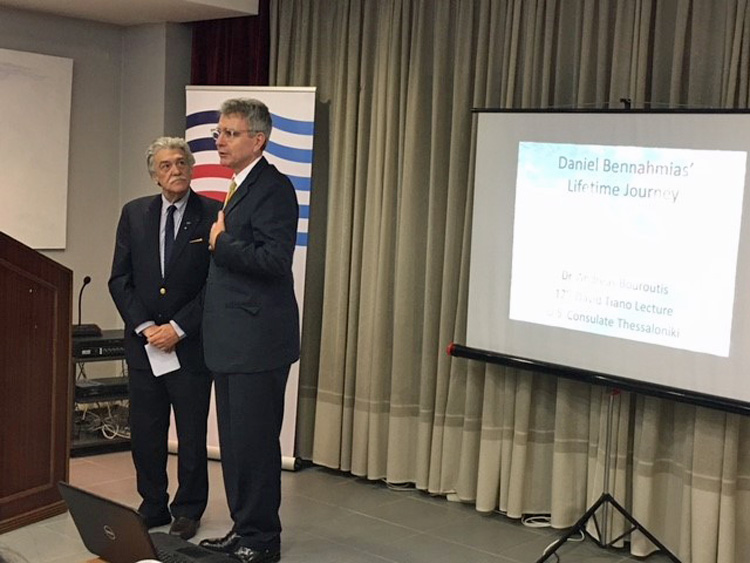 This is the second time, as Ambassador, that I’ve had the opportunity to attend this annual event organized by our Consulate in Thessaloniki in honor of one of our own, David Tiano, who was brutally executed by the Nazis.  This lecture gives us a chance every year to honor his memory and the unjust suffering of all Holocaust victims, while at the same time contributing to a dialogue about the Holocaust and the history of the Jewish Community of Thessaloniki.

In the past, we have also been honored to hear the story of Heinz Kounio, a Holocaust survivor from Thessaloniki.  And I want to thank Mr. Kounio’s family for honoring us with their presence tonight. I’d also like to thank the Jewish Community for hosting us.

Last year I attended a lecture here on the alarming rise of anti-Semitism in Greece, which highlighted for me so clearly how much work we still have to do, and we condemn in the strongest terms yesterday’s deplorable action by Golden Dawn, vandalizing your Holocaust Memorial and marring a demonstration on national themes with hate and criminal behavior.

We must redouble our efforts to prevent hate crimes.  Educational institutions and museums play one of the most essential roles in these efforts. And so I am an ardent supporter of the present Jewish Museum, which I recently highlighted as one Greece’s most important museums in a special tribute in Kathimerini.

I am also strongly supportive of the plans and recent progress made on the new Holocaust Museum and Educational Center that will be established in Thessaloniki.  The new museum will serve as a repository for the stories of the Jews who lived in Thessaloniki before WWII, and the atrocities they suffered under the Nazi regime.  It will chronicle the diverse history of this ancient city – including the contributions of the Sephardic community to Balkan society, and it will underscore the urgent need to cultivate and protect this diversity. It will be a living, daily reminder of the ways in which the history of European Jewry is woven into the fabric of this city.

We’re delighted to hear that the permits have been issued, and the ground breaking ceremony will take place soon.  I understand David Saltiel, and Mayor Boutaris have devoted countless hours to making this dream a reality, and I’m pleased to see their efforts result in success.  I want to commend Mayor Boutaris – and President Pavlopoulos at the national level – for their leadership in bringing this vision to reality.

I am likewise pleased that the government of Greece is taking a more visible and important role on this issue internationally.

Last week here in Thessaloniki, the President of the Parliament announced that Greece would fund a museum in Auschwitz dedicated to preserving the memories of Greek Jews that died there, and he noted that the country should have taken this step long ago.  The U.S. fully supports these efforts and is also proud to work with Greece and 29 other nations on the International Holocaust Rememberance Alliance. And as we approach International Holocaust Remembrance Day at the end of this month, I am pleased that the city of Thessaloniki has invited Israel’s President to pay homage to the Greek Jews who perished during the Holocaust, to lay a wreath at the Holocaust Monument and visit the area where the new Holocaust Museum will be erected.

In this greater context, the Consulate’s organization of this annual lecture in Thessaloniki, which boasted one of the world’s richest Jewish communities, one very integral to Greek society, represents just one modest contribution.

This year, at the twelfth annual lecture, our guest speaker is someone you all know very well: Dr. Andreas Bouroutis, postdoctoral researcher at the Aristotle University of Thessaloniki, who will be talking to us about the journey of Daniel Bennahmias, and his voyage from Thessaloniki to the United States, and specifically to Sacramento, California.

Daniel, or Danny, was hardly more than a boy when he and his family were herded onto the death train that would transport them from their home in Greece to the infamous Auschwitz Birkenau concentration camp.  His parents were exterminated immediately upon arrival, but Danny managed to survive.  He was recruited by the Germans to for the Sonderkommando unit, whose horrendous job was disentangling the bodies of the Jews who had been put to death in the gas chambers to prepare them for cremation.  Danny is one of the few people condemned to serve in the Sonderkommando that survived the war.  He was rescued by the American soldiers.

As another American Holocaust survivor Elie Wiesel once said, “For the dead and the living, we must bear witness.” That’s why we are here today, and so I would like to welcome Dr. Bouroutis to come help us bear witness to Danny’s story, the story of the Thessaloniki Jewish community, and our human story.  Thank you.

David Tiano was an employee of the U.S. Consulate since 1920. During the WWII he was arrested and executed by the Nazi occupation forces on February 7, 1942.  The Germans occupied Thessaloniki from April 1941 until October 1944 and closed the Consulate on July 11, 1941.  During this occupation, three of the Consulate’s Greek employees, David Tiano, Emmanuel Karasso and John Vafiades, were all sent to an internment camp in Thessaloniki.  Tiano was executed, while Karasso and Vafiades survived.

Following the war, they resumed work at the Consulate at its re-opening in 1944.

The establishment of the David Tiano Room at the Consulate resulted from an initiative by Edmund Gullion, the last U.S. Diplomat to depart Thessaloniki just before the German invasion in 1941.  Gullion went on to a successful career in the State Department.  After retirement he became Dean of the Fletcher School of Law and Diplomacy at Tufts University.  In the 1980s he joined Anatolia’s Board of Trustees and served as Chair for several years.

During one of his trips to the campus, he visited the Consulate to propose that his former colleague be formally remembered.  Gullion made a personal financial donation to help establish the Tiano Room with the plaque honoring Tiano.

When the Consulate moved from the waterfront to its present location, it retained the Tiano Room – under the leadership of Consul General Hoyt Yee in 2007 we started the tradition of organizing an annual lecture to honor the memory of David Tiano.