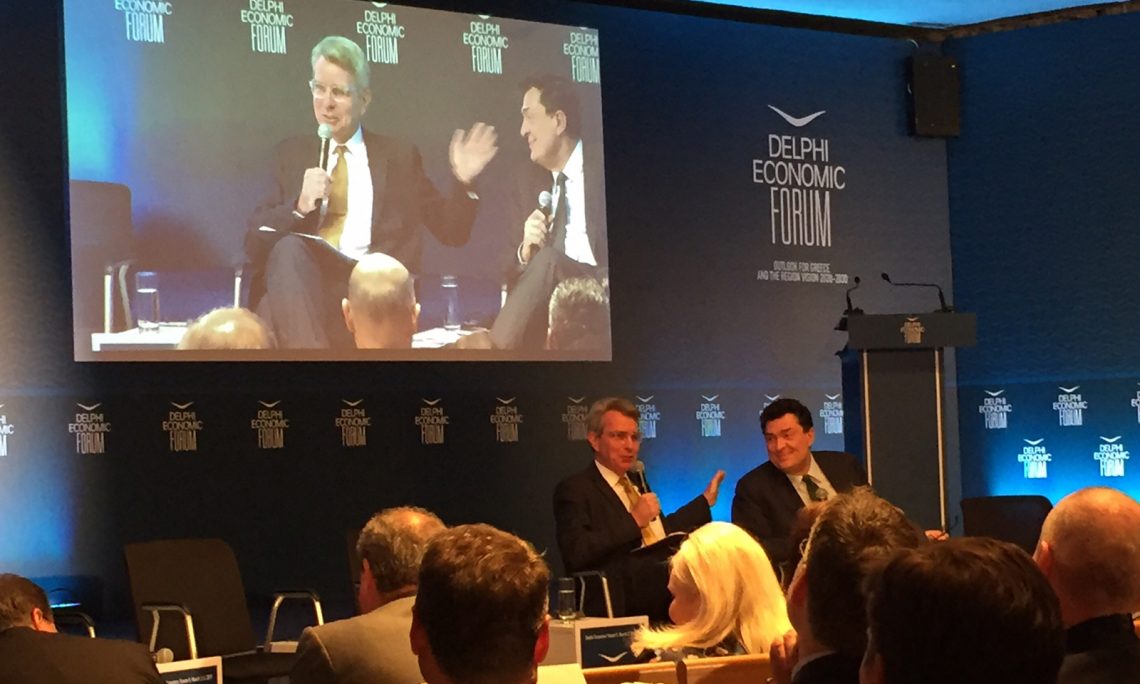 Good evening ladies and gentlemen. It’s an honor to be speaking to you this evening. I have heard so many terrific things about the Delphi Forum since my arrival. I’d like to congratulate Symeon as it’s proven to be even better than expected. I am really looking forward to our discussions. I thought to begin with since there has been a lot of speculation about the Trump administration’s policy – including in some of Alexis’ interviews – I’d like to start with a few words about the importance of our transatlantic relationships, especially, with Greece.

When we talk about our modern transatlantic relationships, we begin with the period after World War II – and, in particular, U.S. support for Greece. When Secretary of State George Marshall spoke at Harvard University on June 5, 1947, he committed the United States to the future of democratic Europe, setting the course of our transatlantic relationship for decades to come. Marshall observed “that the United States should do whatever it is able to do to assist in the return of normal economic health in the world, without which there can be no political stability and no assured peace.”

The U.S. had already provided limited financial aid to Europe, including Greece, in the aftermath of World War II, but Marshall’s speech launched the European Recovery Program. 70 years ago, the Marshall Plan assisted sixteen nations and provided over $12 billion – about $120 billion in today’s dollars – in financial aid. $2 billion of which went directly to Greece. This assistance sparked broad economic growth and helped reestablish European prosperity. To me, this little history lesson is an example of the United States at its most generous. But history has also proven that this was one of the United States’ wisest investments.

This investment led to the growth of the European coal and steel industries and began to shape what would, eventually, become the European Union. This partnership between the U.S. and Europe was the foundation for the strong transatlantic alliance we enjoy today. And I am very much looking forward to celebrating the 70th anniversary of the Truman Doctrine and Marshall Plan this spring – a pivotal moment in our relationship with Greece.

The investment that I just spoke about laid the groundwork for the explosion of trade between the European Union and the United States – today, EU countries are one of the largest export markets for U.S. goods and services. EU and U.S. investments drive the transatlantic relationship, contributing to growth and jobs on both sides of the Atlantic. The transatlantic relationship also defines the shape of the global economy as a whole. Practically every other country in the global economy has either the EU or the United States as its largest trade and investment partner. Together, the EU and the U.S. economies account for about half of global GDP and nearly a third of world trade flows. These statistics show the degree to which the relationship between the EU and the United States matters to shared economic prosperity.

And the United States’ dedication to our EU partners remains unchanged. As Vice President Pence emphasized during his trip to Brussels, the United States remains strongly committed to “continued cooperation and partnership with the EU.” He also underlined that, “Whatever our differences, our two continents share the same heritage, the same values, and above all, the same purpose: to promote peace and prosperity through freedom, democracy, and the rule of law. And to those objectives we will remain committed.” These core democratic values will always be at the heart of our transatlantic relationship. They ground and sustain our political and economic partnership.

My three years as Ambassador in Ukraine impressed upon me the extraordinary power of these democratic values and the importance of our collaboration with the EU to defend our democratic space with our military and security cooperation. Our security ties, specifically our NATO alliance, set the tone for our transatlantic relationship. When we approach our most difficult global security problems – fighting ISIL, addressing ongoing conflicts in the Middle East and North Africa, managing the unprecedented migration flows to Europe or countering Russian aggression – we rely first on our NATO allies. When we face threats to our collective security, we must face them together.

Our NATO alliance has endured for decades – it is a cornerstone of U.S. engagement in Europe and our greatest means of promoting peace and prosperity here in Europe and throughout the world. In his address to Congress earlier this week, President Trump stated, in no uncertain terms: “We strongly support NATO, an alliance forged through the bonds of two world wars that dethroned fascism, and a Cold War, and defeated communism.”

The Vice President also made clear, during his speeches in Munich and Brussels, two weeks ago, that the Trump Administration strongly supports NATO and our transatlantic alliance. Defense Secretary Mattis spoke about the United States’ resolute commitment to NATO during his visit to Brussels; commenting that “NATO is the fundamental bedrock for keeping the peace and defending the freedoms we enjoy today.”

Today’s complex challenges require a strong and enduring alliance. Whether we are dealing with the scourge of terrorism or holding Russia accountable for acts of aggression, we are at our best when we cooperate with our transatlantic partners. When the United States and Europe work together, we can accomplish much more than either alone.

The United States’ enduring commitment to the European Union and to NATO is especially relevant when we talk about the United States’ partnership with Greece. Greece is on the front lines of Europe’s biggest strategic challenges, with far-reaching ramifications for the EU, NATO, and the United States. In his remarks reiterating his strong support for NATO, President Trump also stressed that “Our partners must meet their financial obligations.” I want to commend Greece – one of only six countries in the NATO alliance currently meeting their defense spending commitments under Article III. To consistently meet these obligations, despite domestic challenges, shows Greece’s commitment to collective defense.

U.S. bilateral cooperation with Greece at Souda Bay plays a particularly critical role in supporting our common goal of achieving regional stability. I made my third visit to Souda Bay this week when the USS George H.W. Bush stopped there for repairs and replenishment. I heard from Crete government officials how much they appreciated the economic injection from the carrier’s visit. But I also heard from the ship’s captain how much he valued the support from his Greek counterparts and Souda Bay’s unique strategic location, which allowed the carrier to make a port stop without missing a beat in her operational activities against ISIS.

It is no exaggeration to say that these important regional security missions in the Mediterranean and Aegean simply would not be possible without our Greek partners. We deeply value our partnership at Souda and remain committed to building on what we have already accomplished together. Since I arrived in Greece, I’ve had the honor of welcoming numerous U.S. military leaders, who were here to meet with their Greek counterparts and further strengthen our excellent defense cooperation. Despite how strong our military and security relationship already is, I believe we can continue to build on our partnership and further improve our collaboration. Greece has been a stabilizing force in this region and a steadfast ally and partner to the United States. I want to see Greece play an even greater role as a pillar of regional stability.

Of course, economic stability and prosperity are important elements of any effort to broaden Greece’s role in this region and in Europe. And, therefore, my number one priority is to sustain the U.S. effort to spur growth and support economic recovery in Greece. This was articulated last year by former Treasury Secretary Lew who said that “you have to fix the foundation to have a strong Greece.” As Greece demonstrates its commitment to reform and builds additional trust with its creditors, I am convinced that new investments, both by foreign investors and domestic ones, will buoy the economy and create new jobs.

The United States wants to help Greece’s economy grow. We are eager to see U.S. companies expand their existing investments here in Greece and to invest in new ventures. One of the things we’re working on this year at the Embassy is a road show and a trade mission planned for June in the United States. We are also engaged with the American pharmaceutical industry and the Greek government to support a healthcare investment initiative.

And I am strongly committed to supporting programs to stimulate entrepreneurship. I was reminded by meetings this past week with the startup community in Thessaloniki and with scientific pioneers at the Foundation for Research and Technology in Heraklion that there is much more happening in Greece’s knowledge-based economy than most people recognize. I am committed to leveraging the U.S. Embassy to support this startup ecosystem, to offer young Greek entrepreneurs exposure to U.S. counterparts, and to share lessons from the small and medium enterprises that are the backbone of the U.S. economy.

The United States also strongly supports Greece’s efforts to build its energy connections with Europe. Projects such as TAP, the Greece-Bulgaria Interconnector, Revithoussa, and the proposed FSRU near Alexandroupolis all help cement Greece’s critical role in transforming the energy security of Southeast Europe – and will help drive economic growth in the years ahead.

Those are some of the specific initiatives that are a priority for me. More broadly, though, the U.S. government will continue to work with our European allies and the IMF to help Greece emerge from its long economic crisis as a strong and stable member of the European Union. A strong, united European Union promotes our common goal, set out by Vice President Pence, of promoting global freedom, democracy, and the rule of law.

Whether we are looking at our shared security interests in Europe, economic opportunity for all of our peoples, migration challenges, energy security, or trade and investment, it is clear that the transatlantic relationship between the United States and its European allies, and between the United States and Greece, is as crucial as ever to our collective prosperity. The last 70 years have demonstrated the U.S. commitment to those relationships. A strong partnership with Europe is the starting point for almost everything else the U.S. wants to accomplish around the world. And I am confident this principle will remain unchanged in the years ahead.

Thank you again for inviting me here today. I look forward to talking about some of these issues with the distinguished group assembled here and learning from all of you as I continue my mission to build the strongest possible alliance between Greece and the United States.