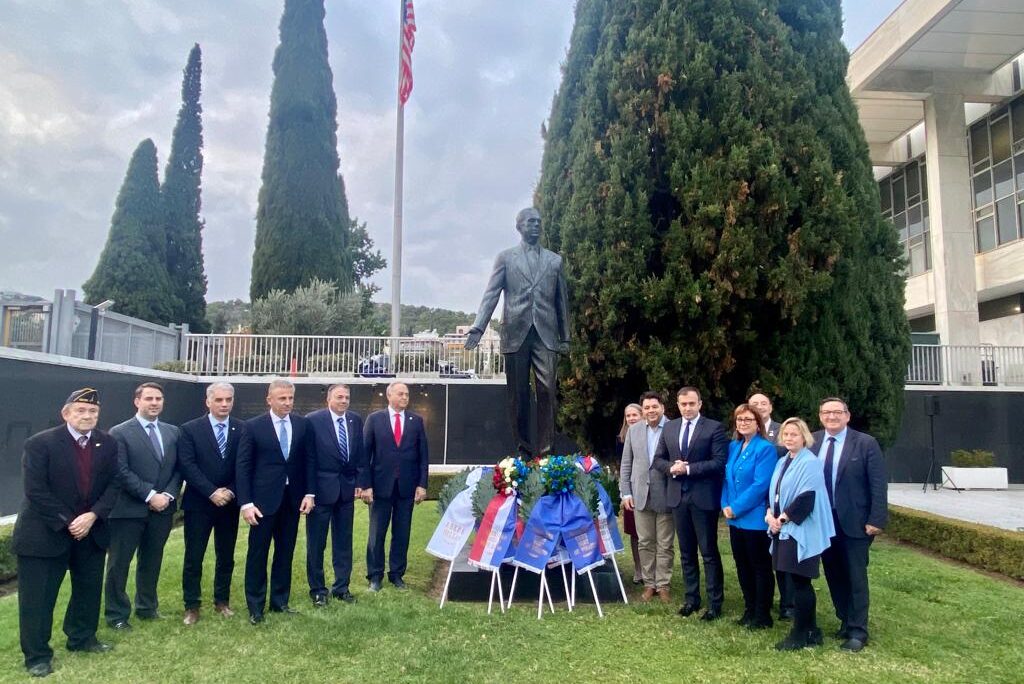 Good afternoon everybody.  A warm welcome to our friends from the Greek Parliament, the World Hellenic Inter-Parliamentary Association and visiting U.S. state senators, AHEPA representatives.

The ancient Greeks, who gave the world so many of the founding principles, like democracy, that continue to guide us today, believed in the concept of kairos.  Kairos was the critical moment upon which the fate of any momentous event or decision rested.  It was a term that ultimately derived from archery — the moment at which an arrow could be released, sure to hit its target.

Throughout the course of history, there have been many such critical junctures, when the fate of the world hung in the balance.  75 years ago, in 1947, was one such time, as the world united to rise from the devastation of World War II and recommit to our shared humanity and the democratic values upon which a shattered world might be rebuilt.

It is no surprise that the president of the United States, the emerging world power, turned to Greece at that critical moment, the cradle of western civilization, where democracy was born.

In his address to Congress, President Truman spoke of the imperative of the United States to assist and stand with Greece if Greece were to survive as a free and democratic nation.  Just as American philhellenes had heard the call of Greece more than 200 years ago and came to fight side by side in Greece’s struggle for independence, President Truman said Americans could not turn a deaf ear to this urgent cause – for the fate of democracy hung in the balance.

Shortly afterwards, Secretary of State George Marshall delivered a commencement address at Harvard University in which he articulated the bold Marshall Plan, stating that, “The United States should do whatever it is able to do to assist in the return of normal economic health to the world, without which there can be no political stability and no assured peace.”

With these momentous pronouncements, our leaders laid the foundation for Europe’s postwar recovery in recognition of the region’s immense strategic importance to U.S. national security.  They also reaffirmed the United States’ special bond and friendship with Greece that continues, growing ever stronger, to this day.

The scale of U.S. financial assistance marshalled for Europe, and Greece, in particular, was unprecedented.  Between 1947 and 1953, the United States provided a total of $13.3 billion in assistance, the equivalent of $150 billion today, in loans and grants.  U.S. support to Greece, through the Marshall Plan and other postwar programs, amounted to about two billion dollars, which would be worth more than $21 billion today.

Just think of that – and the commitment that represents.

The Marshall Plan came at a time when Greeks were literally starving.  Poverty was rampant.  Agricultural production was down 70 percent.  Greece’s industrial infrastructure had been decimated.

Through the Marshall Plan, more than 6.5 million tons of American food and supplies helped save the people of Greece and restore hope at a darkened time.  Millions of dollars in loans helped modernize production, equipment, and factories.  This aid helped create thousands of new jobs.

The Marshall Plan literally transformed the life of my family — and countless others.  In fact, I might not even be here today without it.

My mother still speaks about the blocks of yellow cheese that arrived in our village of Platanos at a time when the people had nothing, not even running water.  This act of solidarity gave my parents the opportunity to embark on a life they had never thought possible, and to give their children the promise of a better future.

Thanks largely to the Marshall Plan, Europe rose again and profited from a heretofore unknown era of peace and prosperity. The foundations of the international order that were laid 75 years ago – based on the principles of democracy, solidarity, economic development, and respect for the rule of law the Marshall Plan enshrined – have helped ensure that numerous generations realized dreams unbroken and free from tyranny and the devastation of war.

And, as we well know, these values are just as essential now as they were in 1947, perhaps even more.  Because we find ourselves now at an equally critical juncture of time, or kairos, when the ideals we hold so dear and that have united our peoples for decades are being challenged like never before – as Russia continues its brutal war of choice against a sovereign European state, and autocratic powers seek to subvert the foundations we, together, have worked so hard to build.

We gather today to honor this great legacy that helped rebuild this country and gave hope to not just the Greek people, to my family, but to countless others throughout Europe and the world.  It’s an opportunity to reaffirm the United States’ commitment to Greece and the special bond that unites us.

Let us not forget our sacred obligation — to stand together, just as we have always done and will continue to do so.