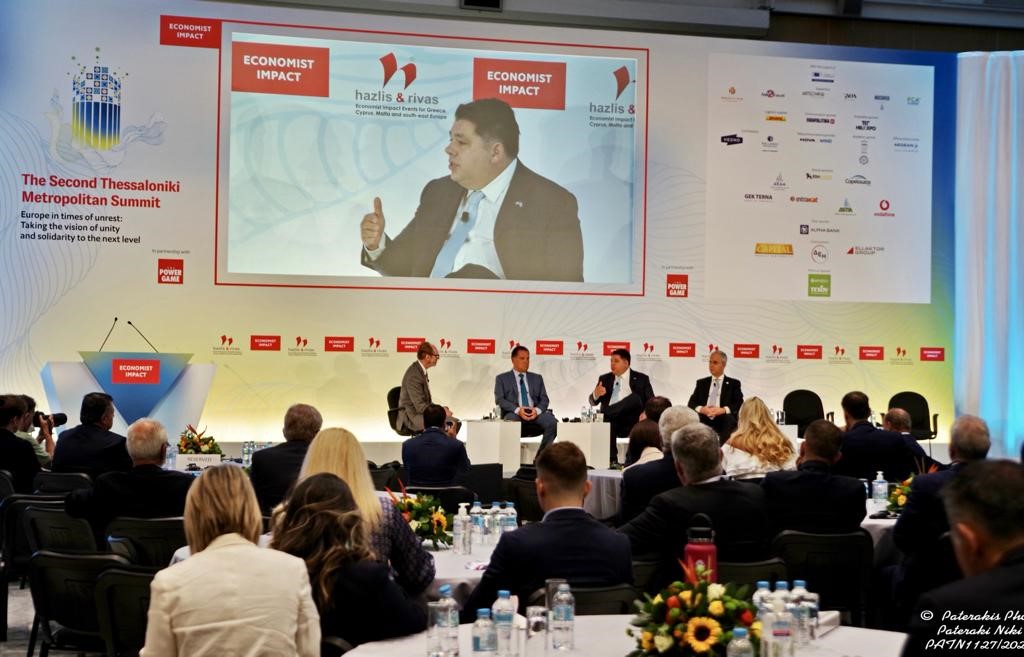 Europe in times of unrest: Taking the vision of unity and solidarity to the next level

Well, I want to thank The Economist for having this. You know, when you speak about impact, and here at TIF and being here at the Economist Forum, is incredibly impactful. You know, I remember the very dark days when Greece was a punching bag. And it was very painful to me to see, not only politicians across Europe, you know, speaking about kicking them out of the Euro[zone], but how they were portrayed. And it speaks to the Greek spirit and Greek resiliency that they stood up. They withstood probably a 25-30 percent contraction in their economy, 27 percent unemployment rate, and [it] created a series of humanitarian crises. And despite all odds, they have turned their economy and their country around.

The Mitsotakis’s government has been reform-minded. They have made this country a beacon. When you look at 7.7 percent GDP growth last quarter, this isn’t rhetoric. This is intrinsic scientific data. There was 8 percent GDP growth last year. This is top in Europe. So, this is the growth leader of Europe and it is also the gateway. It is a large part on how Europe is going to deleverage Gazprom in Russia. I don’t want to get into how we got into this mess. The rearview mirror is very, very small and the front windshield is very large for a reason.

We have to look forward and go forward. And as we go forward, everyone is saying that Greece is the gateway to energy independence for the Balkans. They have the existing infrastructure, and the new infrastructure that is needed is in the process of being built or considered. And we have to support that because that speaks to energy independence. And, you know, it is very obvious that Russia has used energy as a geopolitical tool, and this is how we get Russia’s foot off of Europe’s neck, which is something I think we all agree needs to happen. But Greece’s reforms in this city have led to Pfizer, Deloitte, Cisco [investments] across the country.

The digitization efforts are miraculous. I mean, in the United States, I have a COVID card that says, a little piece of paper that is crinkled and everything, and in Greece, it is on a phone. I have to pull out [my driver’s license], Greece’s is on a phone. So, digitization efforts are just outstanding. Greece’s gov.gr has over 2,000 things you can do online. Now that has led to the necessity for cloud investments: AWS, Microsoft. If you look at the leading U.S. companies that are making substantial investments in Greece, and not only in the energy field but in the technology field, it is really unprecedented.

So, I need to thank my friend, Adonis. You know, in Greece, it is just Adonis, like Madonna, because everyone knows Adonis and Eugenia for their friendship, but also Adonis’s efforts in the Mitsotakis’s administration have led to very tangible results. And as we look forward to finding a partner that is solutions-oriented, that is a pillar of stability, that is reliable in the region, it is Greece that we look to. The military ties, the economic ties, the national security ties with the United States are the best they’ve ever been, and I assure you they are going to get stronger. Η Ελλάδα στέκεται στα πόδια της. Και οι καλύτερες μέρες της Ελλάδας είναι μπροστά της. I’ll translate for those who didn’t understand. Greece is standing strong. They’re ready to participate in what I think is going to be an economic miracle in this part of the world, to provide a lot of economic leadership in the Balkans, which I think is very important, because I think Greece and the United States, and the EU, need to provide more leadership in the Balkans for a whole host of reasons. But the best days of Greece are ahead.