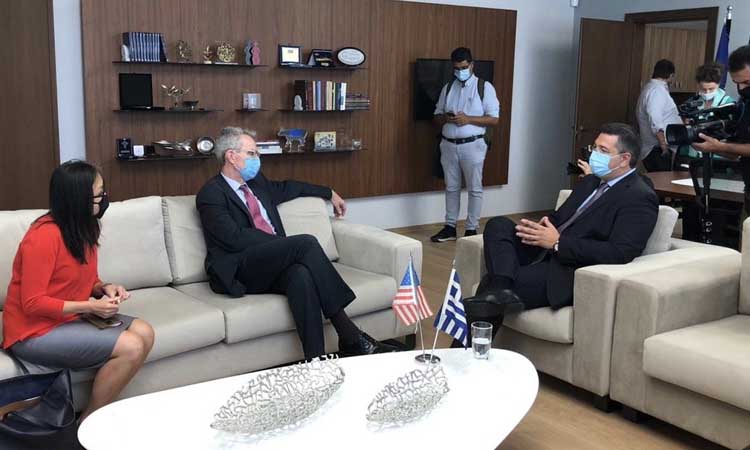 Καλησπέρα! Let me first say what an exciting day today is as I’m here in Thessaloniki to help introduce our new Consul General, Liz Lee, somebody who is highly regarded in our diplomatic service, and most importantly, like me, is a Californian, with the sense of optimism and future orientation that is so deeply embedded in my home state.

I was reminded today by my friend the governor that four years ago, when I first came to Thessaloniki, one of the questions that he put to me was, where are the Americans? Why do we not have more engagement here in northern Greece from American business, from American culture, from the American military? And I’m proud to say, in partnership with the governor, we have fixed that problem.

You see a strong American commitment to our presence here across all sectors, building on decades of partnership with educational institutions, like Anatolia College and the American Farm School, building on the fantastic relations of our diaspora, between the Church in America and the Greek Orthodox Church here in Greece, as I was reminded with the Metropolitan, who I was with earlier today. But also now adding these critical new components: our rotational forces moving through the port of Alexandroupoli, our companies, like Pfizer and Cisco, that are putting down roots here in Thessaloniki, and using Thessaloniki as a window to access a 30 million strong market in the western Balkans.

So this is a very exciting time for U.S. relations with northern Greece, and Macedonia and Thrace. It’s a strategically important time, and we recognize all of the challenges from outside that Greece is confronting today. And we’re very grateful to have a partner like Governor Tzitzikostas, who speaks not just for this region but also with an important European role, as a leader of the Committee of Regions in the European Union.

So I’m very excited to have Liz here representing the United States. As I said to the governor, I really look forward to seeing what she accomplishes during her three years here. And I think she is arriving at a moment of unique possibility for the U.S.-Greece relationship. And I’m very grateful for the warm welcome that she has already received, and I know she looks forward to working with all of you in the months and years ahead.