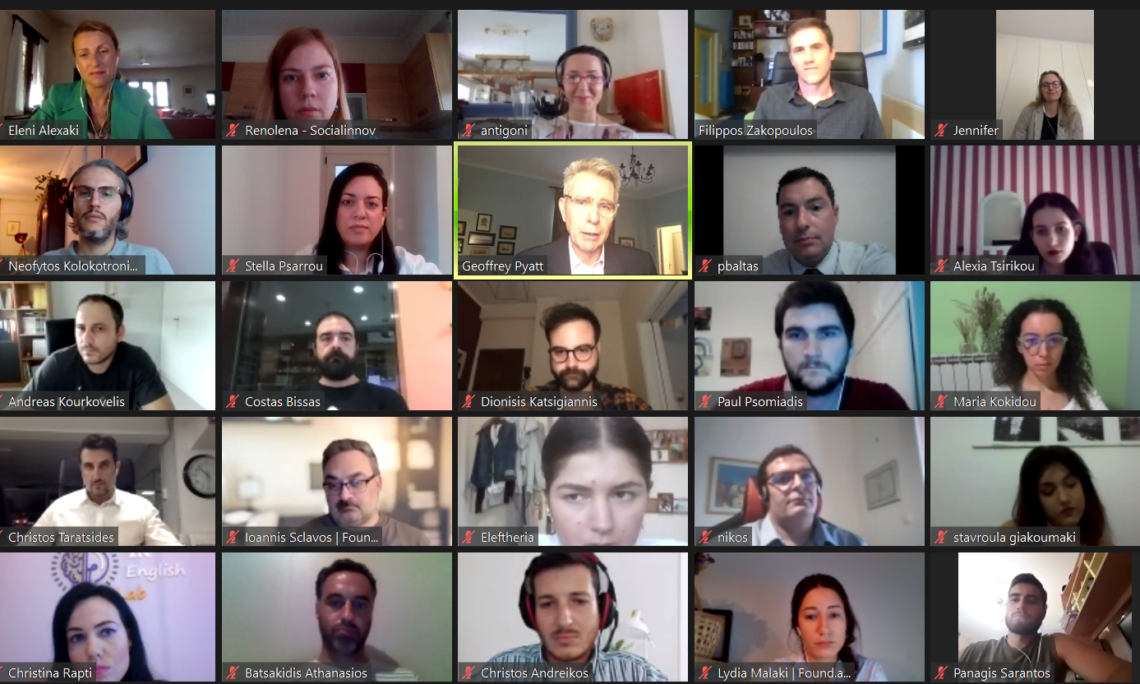 Dimitri, Filippos, all of our partners there, thank you for letting me join today.  Like you, I’m eager to be able to start doing these things in real life again before too long, but this is where we are for now, and in particular, I want to congratulate you for having this whole virtual training program and managing this program entirely through online platforms.  I think it’s a good illustration of both the great work that the Tech Academy is doing, but also how we’re all learning new tools though this process.

First of all, this is a fantastically exciting period for everything that is around the technology space in Greece.  I couldn’t have predicted when we spoke in July at the beginning of your program how quickly we would see progress on some really landmark projects, and I’ll come to that in a minute.

I also want to emphasize the U.S. government’s continued strong support for what’s happening in this space.  Last week, we had my boss, Secretary of State Pompeo, up in Thessaloniki.  Technology and U.S. technology partnership with Greece was a big part of his program.  You saw that in his remarks, you saw that also in the terrific development that we had as he signed our Science and Technology agreement along with Michael Kratsios, the Greek American head of the White House Office of Science and Technology Programs, who had been part of the American delegation for TIF in 2018.  So this was a little bit of a homecoming for Michael, and I think he was equally impressed to see how much progress has been made in building on the foundation that we laid at TIF in 2018, whether it’s Cisco and Pfizer and Deloitte, all of the new technology investment that we’re seeing up in Thessaloniki.  Also the really landmark progress that the government is making, and I was glad that Michael, after being with Secretary Pompeo, was able to come down here to Athens, where he saw Minister Pierrakakis, and I think, was really blown away to see how fast the Mitsotakis government is moving in the technology space.

We’re going to remain engaged in this area, including in Thessaloniki, and I think I’ve said before that we’re committed to having our Tech Camp for women in Thessaloniki, hopefully in the fall of 2021 in real life.  We were planning to do that last month at the Thessaloniki International Fair, and we had to pull that down.  I was also really excited when Secretary Pompeo was in Thessaloniki, that he was able to take part in the signing of our Science and Technology Agreement.  And we’re going to continue to build on that.  Had a good conversation with Minister Georgiadis, who signed for the Greek government, then also Alternate Minister Dimas.  We’re really proud of the work that we’re doing with the Greek government and the commitment now from both governments to continue to invest in the creation of knowledge and the empowerment of this knowledge-based economy, in which the work that you guys are doing is so important.

And then finally, of course, the real flagship success of recent weeks is the one that we saw announced by Brad Smith from Microsoft earlier this week along with Prime Minister Mitsotakis as he made a hugely important announcement of a new Microsoft investment in a data center complex in Greece, by far the largest investment that Microsoft has made in its long history here.  I was really glad to talk to Brad about the strength of the Embassy partnership, historically, with Microsoft, including in areas like skills development and mentoring, and I was really delighted that not only is Microsoft investing in Greece, they’re also investing in the people of Greece, and Brad Smith announced additional commitments that Microsoft has made to upskilling.  It was really inspiring for me to hear his optimism and his points about how he expects that having a Greek cloud, having the data center here in Greece, will empower the digital economy of this country and create additional opportunities for innovation and for Greek young people who are looking to develop their skills in this area.

And it’s not just Microsoft.  Google also announced at the Athens Democracy Forum a million-dollar grant to support Greek economic recovery, not only though COVID-relief, but also through support for small and medium businesses, distance learning, and digital skills, the same kind of thing that Google has done effectively in the United States.  So this is a whole-of-government enterprise for the United States involving the White House, the State Department, the Department of Commerce, but it’s also seeing fantastic support from our world-leading technology companies.  Giants like Microsoft, Google, and Cisco, but also all of the small, innovative companies that are such an important part of the American tech economy.

So I’m really excited about all the dramatic progress that we’re seeing in this area.  As Eleni knows, this is a space where the American Embassy has invested a lot of time and energy over a number of years now, and it really feels like we’ve reached escape velocity, and that we’re seeing the fruits of our labors.  And, of course, our partnership with Socialinnov has been a big part of that, so I want to thank all of you for the great work that we’ve done together over many years, but also groups like Microsoft and People for Business, who have been such great collaborators with us.  So I want to congratulate also all the graduates and especially wish good luck to all of those who are going to be taking their MTA exams, and I look forward to hearing the comments this afternoon.  I’m going to log off from here because I have a much better connection on my laptop, and I’ll be listening in from that end.  Thanks all for having me with you today.