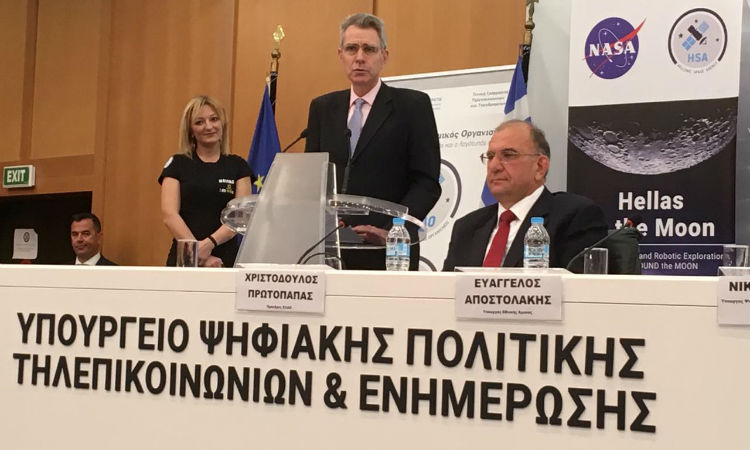 US Ambassador discusses deepening U.S.-Greece cooperation in space exploration at the Ministry of Digital Policy’s “Hellas to the Moon” Forum. State Department Photo.

Καλημέρα σας.  It is very exciting for me to join Minister Pappas and Minister Apostolakis at this forum to hear proposals for Greece’s first mission to the moon, which will be carried out in parallel with NASA’s mission to land human beings on the unexplored lunar South Pole by the year 2024.

Because of its cost and complexity, Space exploration today is by definition an international undertaking.  The International Space Station illustrates this, and I am very proud of the superb partnership between NASA and the Hellenic Space Agency that has emerged in the year since the agency’s establishment.

Greece is a strategic partner of the United States with a strong base of science and engineering talent, so it’s fitting that the Hellenic Space Agency has joined our global alliance to create the lunar-orbit space station, Gateway.

It takes the whole international community to put human beings today into space and to take advantage of the opportunities and to overcome the challenges that deep space presents.  This effort to develop a permanent presence on the moon will open a treasure trove of scientific research and fuel new innovations and create new markets.

We are very excited that Greek academic and scientific institutions will join the United States in this endeavor, and I look forward to even deeper cooperation between the Hellenic Space Agency and American industry in that regard.

The news of the renewed relationship in space cooperation between the United States and Greece coincides with the 50th anniversary this July of the Apollo 11 mission, which first put a man on the moon.  Now, I’m embarrassed to admit that this was actually one of my very first television memories, staying up way past my bedtime to watch that first moon landing on a little black-and-white television screen, which was about this big.

But it’s worth remembering that in the famous speech he gave at Rice University to persuade Americans to support the challenge of the Apollo program, President John F. Kennedy made the point that “We choose to go to the moon.  We choose to go to the moon in this decade and to do the other things, not because they are easy, but because they are hard, because that challenge is one that we’re willing to accept, one that we are unwilling to postpone, and one that we intend to win.”

Of course, the space program that realized Kennedy’s vision took its name from the Greek god of truth, prophesy, and light.

The Greek people, who have thousands of years’ experience as explorers and seafarers, who have curiosity and ingenuity in their history and in their blood, have accepted this new challenge of our age, and I have no doubt that you will succeed in this endeavor and make both of our countries very proud.