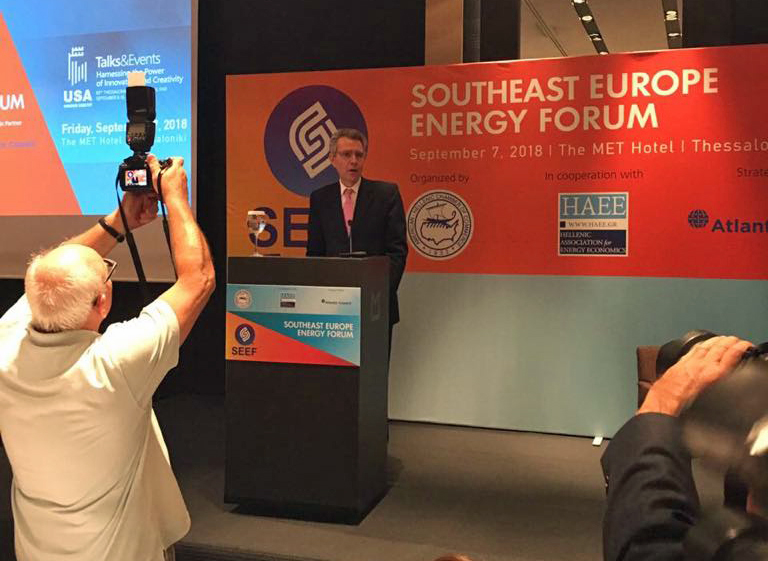 Good afternoon, Minister Antic, friends, kalosorisate, and welcome to the 83rd Thessaloniki International Fair. Let me first offer a huge thank you to Simos and the rest of our partners at the American-Hellenic Chamber of Commerce, as well as my good friends from the Atlantic Council for convening this discussion today.

This is the kickoff event following a year-long effort to prepare for the 2018 Thessaloniki International Fair. So I will start with a huge sense of relief, but also synxaritiria, and congratulations to AmCham for the extraordinary work they have done to highlight the role of American business in Greece today. Thank you very much.

I also want to acknowledge here today, the presence of three legislators from the US States of New York, Wyoming and Rhode Island (inaudible) our political engagement but also the rich diaspora ties. This one is the first event in an extraordinary week of activities to the United States’ role as the honored country at the Thessaloniki International Fair.

And it seems appropriate to begin the program at TIF with a discussion about the regional energy landscape, as it relates so closely to many of the central themes both in this year’s Fair and in the growing role that Greece – and northern Greece in particular – is playing in our strategy for Europe.

Northern Greece and this city has always been an important crossroads for Europe and the Mediterranean region, as evidenced by its rich demography, its amazing archaeology and the fantastically diverse cuisine that’s made so many people consider it Greece’s culinary capital.
This crossroads role particularly true when we talk about energy resources. The importance is reflected on a second senior-level U.S. energy official to visit Greece this summer, in the person of Department of Energy Under Secretary Mark Menezes, who will provide his perspectives in a moment.
A few weeks ago we also hosted in Athens State Department Assistant Secretary for Energy Resources Frank Fannon who noted that Greece is a critical energy partner of the United States and a champion of European energy security, helping to deliver on our shared goal of deepening energy security through diversification of routes, sources, and supplies of energy.

And I’ve found every time that I’m speaking in Greece on European energy security, whether it’s next to EC Vice President Sefcovic or Bulgarian Minister Petkova, that U.S., European and Greek policy all agree on this point.

The role of northern Greece is especially evident when we look at the Southern Gas Corridor. This initiative – one of the most complex projects of its kind ever developed – is on the cusp of providing an alternative source of pipeline gas into Europe for the first time ever, and Greece, through its support for the Trans-Adriatic Pipeline is playing a critical role in accomplishing this goal.

Once operational, TAP has the potential to bolster Europe’s wider energy security and enhance regional infrastructure all at once, while fulfilling Greece’s goal of becoming an important regional energy hub. And it is no small thing that the largest segment of the pipeline – more than 550 kilometers – runs directly through this region.

At the same time, Greece is taking steps to provide expanded options for liquefied natural gas into Greece, both through upgrades to the existing terminal at Revythoussa and the proposed new floating storage unit near Alexandroupolis, which is a US Government priority. These initiatives boost Greece’s energy resilience, strengthen regional markets, and create new opportunities for business.
They also help deliver on our shared goal of increased U.S. LNG exports to Europe, as highlighted in the recent Oval Office meeting between Presidents Trump and Juncker.

Tied to real progress in stronger regional connections, including the Greece-Bulgaria Interconnector, and wider efforts to strengthen economic ties and cooperation throughout the region, Greece and its neighbors have the capacity to achieve real transformation of the energy landscape, with enormous benefits for citizens and businesses alike.

In that regard, its important to have with us today, Minister Antic, and Minister Petkova and I know both Ministers and my friend Minister Stathakis strongly remain committed to the goal of implementing the IGB pipeline as soon as possible.

We are also very excited about the possibilities in the petroleum sector, especially on the upstream side, with the recent approval of joint exploration in several areas, including off the coast of Crete, by ExxonMobil with its partners Total and Hellenic Petroleum.

And there is enormous value in Greece’s expanding regional cooperation, whether through trilateral discussions with Cyprus and Israel or through deeper engagement with its Balkan neighbors, as we saw in the recent Quint discussions here in Thessaloniki.

In that regard, I’m very glad that we also have with us here today my friend and colleague Ambassador Kathleen Doherty from Cyprus, another reflection of the US view for Greece as a key regional partner.

I should also mention the importance of the many privatizations taking place in Greece right now in the energy sector. The recent successful sale of DESFA, forthcoming privatizations of the electrical and power generation system, and the upcoming sale of the majority of Hellenic Petroleum, all offer the chance for new capital and innovation in Greece’s energy sector, at a time when Greece is returning to growth and able to take advantage of a transforming energy marketplace.

So I’m very pleased that we have with us today Undersecretary Mark Menezes from our Department of Energy today to offer the Trump administration’s perspective of wider energy policy, and over the course of the next few days Undersecretary Menezes will have a chance to interact with many of you and learn more about what we view as a critical Greek role in the region.

In closing, I would like to wish everybody a very successful week here at TIF! And take advantage of the fantastic opportunities that we will see all through the next ten days, to grow the US-Greece investment relationship. Thank you very much.