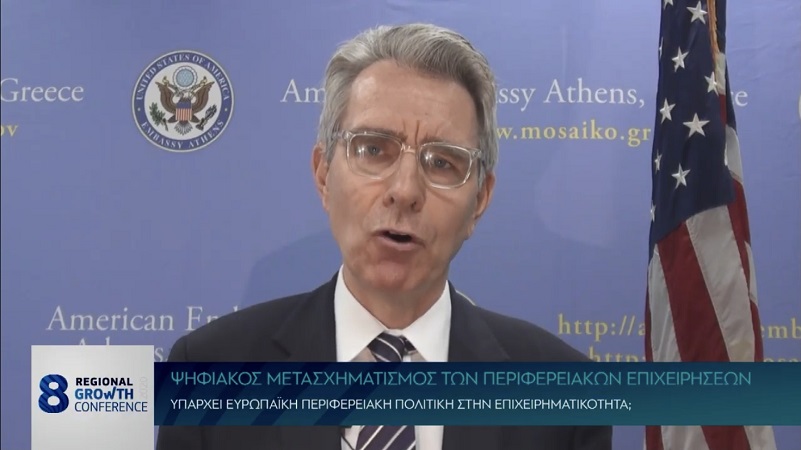 Καλημέρα. Minister Georgiadis, panelists and friends, thank you for inviting me to share this video message with you at the start of your panel.

As you all know, Patras is close to my heart, and I was really sorry to miss the Race of Sacrifice to Kalavryta this year because of the pandemic. But I look forward to returning to western Greece later this summer and, of course, enjoying more of your stunning sunsets and vibrant economic and cultural life.

The American Embassy is closed today for the Independence Day holiday, but I’m happy for this opportunity to participate in the 8th Regional Growth Conference and to be reunited with my friend Minister Georgiadis following our joint appearance last September here at the beautiful Achaia Claus winery.

Now that Greece has begun the process of reopening its economy, we at the U.S. Embassy, too, have shifted our focus back to the economy—how we can help to ensure that Greece has a V-shaped recovery curve, returning to positive growth as quickly as possible, jointly with American companies and American investors.

That recovery effort will be helped by two factors: one is the reputational boost that Greece has enjoyed because of the government’s effective, data-driven management of the pandemic. Once viewed as the black sheep of Europe, Greece has outperformed many of its European neighbors in terms of managing the disease.

Second is the tremendous progress that Prime Minister Mitsotakis, Minister Pierrakakis, Minister Georgiadis, and so many others on the Greek government team have made on the digital transformation of this country since I spoke at this venue last September.

Greece once ranked near the bottom of the European Union in this area, but now, the digital transformation of Greek government processes is well underway. So the subject of this panel, “Digital Transformation of Regional Business” could not be more timely.

I am very proud of the fact that American companies and American technology have played such an important role in helping Greece to digitize its government. And as I’ve learned over the past four years, Western Greece lies at the heart of this country’s digital revolution.

In an important development on April 29th, The U.S. Trade Representative removed Greece from its Special 301 report as a reflection of the government’s successful efforts to acquire licensed Microsoft software for public sector employees. The conversations that began as part of the Greek state’s effort to acquire legal software have clearly put Greece on the map for Microsoft leadership in Redmond, Washington.

And Greece’s relationship with Microsoft is growing dramatically. Microsoft has already invested in an augmented reality application nearby in ancient Olympia to help tourists and visitors to appreciate that fabulous, classical site. But Microsoft has also acquired the Greek company SoftoMotive, with which it will launch a Robotic Process Automation development hub in Athens.

The improved investment climate in Greece and the value proposition of Greece’s highly skilled tech force were also reflected in the May 4 announcement that Think Silicon, a Patras start-up specializing in graphic processors had been acquired by California’s Applied Materials. I warmly remember how impressed I was by my visit to Think Silicon at the Patras Science Park not so long ago.

We’re also collaborating with Minister Georgiadis in a number of other sectors to bring more U.S. investment to Greece.

The American-Central European Business Association, or ACEBA, is working with us on a business mission that will come to Greece in December, which will include leading American companies in aerospace, defense, healthcare, energy, and information technology.

And we are moving ahead with planning for a Partnership Opportunity Delegation, an exciting mission of innovative American companies looking to invest in the digital and cyber sectors here in Greece.

And in tourism, I’m glad that work has finally begun to clear out the old Hellenikon airport, and I’ve been happy to see Minister Georgiadis prominently posting pictures of bulldozers on his Twitter feed. Once the tender for the integrated resort complex is finally decided, we expect this to represent an approximately one billion U.S. dollar investment in Greece’s critical tourism sector and a vote of confidence in this government.

Meanwhile, we’re working closely with the Development Finance Corporation, a government entity created by the U.S. Congress to offer an alternative to the checkbook diplomacy that China and other great power rivals have been engaged with through mechanisms like the Belt and Road initiative.

Just recently, the Development Finance Corporation signed a retainer letter with the American company ONEX to pursue the purchase and renovation of the Elefsina Shipyards, which supports key regional energy projects and is in line with U.S. and Greek efforts to diversify energy supplies.

And just last week, DFC CEO Adam Boehler wrote a letter to Minister Georgiadis reaffirming the Corporation’s commitment to the Elefsina project. The DFC is now proceeding with required due diligence so as to be able to make a final determination, moving forward jointly with the Greek government on this investment. The DFC has recognized that the project has the potential to revitalize a strategic asset and support significant job creation here in Greece.

U.S. investors are also looking to partner with the DFC to invest in other key infrastructure that will enhance energy security and the diversification of energy sources in this region, including the ports in Alexandroupoli and Kavala.

Minister Georgiadis has been involved with DFC from the very beginning and has encouraged the Corporation’s participation in these strategic infrastructure projects, both for the financing that would come but also for the signal that U.S. government involvement sends to the broader investment community that Greece is open for business.

Finally, since we are here in Patras, I should say a few words about Greece’s bicentennial in 2021, which is so deeply tied to America’s independence.

We are working with the Greek government on a full range of programming to help commemorate the 200th anniversary of the Greek Revolution as well as our countries’ shared democratic values and interests.

With its rich history and thriving community of American citizens, western Greece will play an important role in our Embassy plans for celebrating the Greek bicentennial.

We know what an important role western Greece has played in the country’s fight for independence. Bishop Germanos of Patras raised the flag of revolution over the Monastery of Agia Lavra, and of course the heroism of Greeks and Philhellenes during the Third Siege of Messolonghi won the sympathy of Europe and the Great Powers, leading to the Battle of Navarino and Greece’s ultimate independence.

The United States is going to continue to work with Greece across all of the pillars of our Strategic Dialogue, but with a particular focus on supporting Greece’s economic recovery, building our trade and investment relationship, leveraging tools like the Development Finance Corporation, and identifying the sectors where we see Greece poised for a rapid growth. We’ll also be looking for opportunities to celebrate alongside you in 2021 and highlight this region – western Greece’s special contributions to Greece’s storied past and its bright future.

So, I look forward to continuing the conversation today in the weeks and months ahead. Ευχαριστώ πολύ.