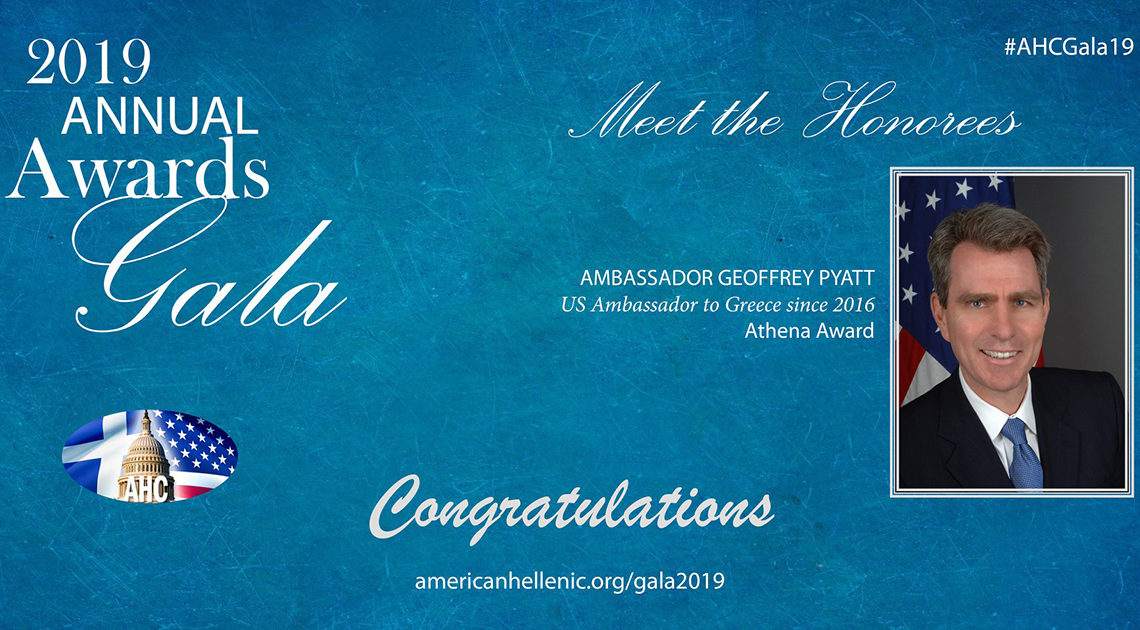 Καλησπέρα σας! Thank you Mike for your kind introduction and for all the work you do to deepen the connections between the United States and Greece and to bring our people closer together. As U.S. Ambassador to Greece, I am privileged to have allies like Mike and other leaders of the diaspora community, and am very grateful for your support. I should also say, as a proud Californian with parents in La Jolla and two kids living in LA, I am very sorry not to be with you in person. And I am deeply honored to be receiving the American Hellenic Council’s inaugural Athena Award.

For almost a half a century, the American Hellenic Council has been a leader in promoting Greek-American interests in the Eastern Mediterranean and in the Aegean, and has remained at the forefront of political advocacy for the Greek-American community. And I very much look forward to continuing this partnership on one of my next visits home to California.

The bilateral relationship between the United States and Greece has never been stronger, and this happy state thanks in large part to the ongoing efforts of organizations like the American Hellenic Council and the enduring ties of kinship, friendship, and partnership, between our people and societies.

As U.S. Ambassador to Greece, I have had the unique honor of traveling extensively through Greece over the past three years, and meeting thousands of ordinary Greek citizens. These conversations have given me a deep appreciation of the diaspora’s role as the foundation of our people-to-people ties. The Greek Americans I encounter and work with on a daily basis are firmly rooted on both sides of the Atlantic, and this reinforces the overall U.S.-Greece bilateral relationship. In many ways, it is the “secret ingredient” of our strong and enduring alliance.
The Greek American diaspora have also made a significant contribution to addressing the devastating effects of the decade long economic crisis, and now supporting the economic recovery of Greece.

Throughout this long economic crisis, the United States has strongly supported Greece’s recovery, as we believe a robust economy in Greece will lead to a stronger bilateral partnership between our two nations, and greater ability to work side-by-side on our common regional goals — strengthening Greece’s role as a pillar of stability in a difficult region.

Now, after last December’s first U.S.-Greece Strategic Dialogue in Washington, that U.S. support is taking on a more strategic and more regularized format. This was reflected last week in Secretary Pompeo’s participation in the 3 +1 trilateral with the Prime Ministers of Greece, Israel and Cyprus in Jerusalem, and will be reaffirmed next week as Foreign Minister Katrougalos travels to Washington as we mark the 70th anniversary of our NATO alliance and has another round of senior meetings.
But, as a life long Californian, I am also aware that there is much more to America than the Northeast Corridor, and in many ways my home state reflects the very best of our country.
So, I’d like to congratulate the Council for organizing this event to recognize the Greek- and Cypriot-American honorees who have made important contributions in their fields, including business, philanthropy, entertainment, and public service.

Whether it is through your support to the business community or your philanthropic efforts, your work sustains the bilateral relationship through all its challenges and celebrates our triumphs. And in so doing, it strengthens the rich and textured relationship between the United States and Greece.
In closing, I want to stress how grateful I am for this recognition. As a temporary resident of Athena’s city, I am inspired every day by her wisdom and skill. It’s a great privilege to serve as U.S. Ambassador to the Hellenic Republic at this historic time in our relationship and to have the opportunity to work within Greece’s proud and multifaceted society and with the American Hellenic Council.