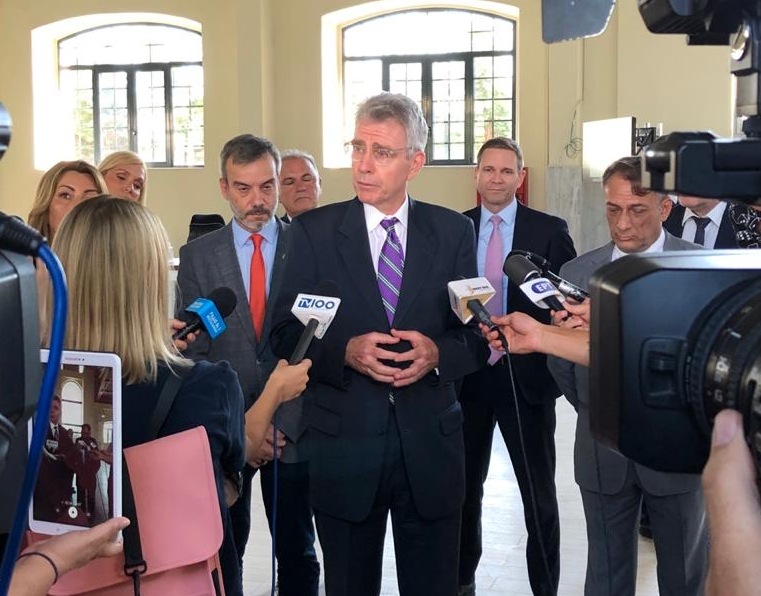 Καλημέρα σας.  Let me start by saying what a pleasure it is to be back here in Thessaloniki with Mayor Zervas.  It’s hard to believe he’s only been in office for 9 months given all that’s been accomplished.  I’m especially glad that we’re able to meet today at this Cisco Technology Center.

As you all know, the Embassy has put a lot of focus over the years on our work with things like digital skills, mentoring, supporting the Greek startup sector.  And we are incredibly proud of the work that Cisco has done with the municipality.  I want to congratulate the Mayor and the Prime Minister on getting this from concept to reality so quickly.

We, as the U.S. government, are going to remain engaged, helping to lift up the narrative of both Thessaloniki’s emergence as an important technology hub in Southeastern Europe for Greece and the Western Balkans.  And it’s not just Cisco, it’s Deloitte, it’s Pfizer, it’s all of our companies that are here, leveraging the large student population, the human capital, and also the supportive government environment.

I also want to congratulate Cisco on their success in moving this from concept to reality so quickly.  Cisco is one of the American technology companies like Microsoft, like Google, that has really stepped up to the plate and raised its game to support the Greek government’s successful response to the Coronavirus pandemic, working with the Ministry of Digital Governance in this remarkable digital transformation that the Greek State has accomplished over the past four or five months, and we’re very excited about the platform that this center will provide for future programming and partnership with the American Embassy and with our NGO partners, groups like Found.ation and Socialinnov that have worked with Greek young people to demonstrate the capacity that Greece has to be an important player in the Southeastern Europe technology space.

The last point I will make: I’m very proud of the fact that we’re doing this in Thessaloniki because it builds on something we began two years ago with the American Pavilion at the Thessaloniki International Fair, where Cisco and so many of our other technology companies played a leading role along with the Ministry of Digital Policy.  It’s wonderful when you’re able to plant these seeds and see them actually grow into something.

So, thank you to Cisco, and thank you, of course, to Greg Pfleger, our departing Consul General, who began his tenure with the Thessaloniki International Fair and leaves a fantastic legacy for his successor, Liz Lee, a very highly regarded foreign service officer who will build on the legacy that Greg leaves behind, and we will look forward to welcoming her in a couple of weeks at the end of August.  So thank you very much, everybody. Καλό καλοκαίρι, and we look forward to seeing you here in September for the formal inauguration but also for all the work we’re going to do together.

Journalist: You have said a lot of things about Thessaloniki being a hub in northern Greece, but can it also be a hub for the Balkans?  We have been discussing for many years in Thessaloniki that this city has the potential to become a hub for the whole Balkan area.  Is this possible?

A hundred percent. Our strategy, our approach to Thessaloniki over the past several years has focused on leveraging this city’s role as a gateway to the western Balkans.  We did that at the Thessaloniki International Fair.  I was sharing with the Mayor that one of the most interesting events in 2018 was a lunch that we hosted with some of our State Department and Department of Commerce officials along with technology ministers from all over the western Balkans, from Bulgaria, North Macedonia, Serbia, Albania. The interesting thing is, these are all young people.  They all look to Greece as a partner.  Greece’s advantages because it is a member of the European Union, you have the regulatory and technological standards already clearly established, and we hope to work together to build the same kind of transparency, the same standards across the western Balkans. So this is another area where Greek interests and American interests coincide.

Journalist: So apart from Pfizer and Cisco and Deloitte, do you think more companies will come to Thessaloniki?

I think one of the things that’s already happening is, the perception of Greece among American technology companies is changing very rapidly.  You saw that with Applied Materials from Silicon Valley acquiring Think Silicon in Patras.  You saw that with the acquisition by Microsoft of SoftoMotive, and importantly, Microsoft’s intention to continue developing SoftoMotive in Greece as a robotic process automation hub.  So you see how Greece is on the radar scope in a way that wasn’t true a few years ago for these technology companies.  I’m very proud of how the Thessaloniki Fair in 2018 planted the seeds for this process now, and I’m quite confident that the success of companies like Deloitte and Cisco and Pfizer here in Thessaloniki will lead other companies to seek to do the same — but not just our companies, also our universities, because a lot of our technology industry also comes out of our universities and research institutes, and we have a strong partnership with the Prime Minister and with Minister Kerameus to grow cooperation in that area as well.

Journalist: We learned today that our Minister of Defense has cancelled his trip to the U.S.  Is there something more we should be reading into this, or is it just a cancellation because of the Coronavirus?

There’s nothing to be read into it.  The defense and security relationship is one of the great bright spots of our bilateral relations right now.  We’re doing more today than ever before.  I know that Secretary Esper and the leadership of the State Department and the White House and Congress are eager to welcome Minister Panagiotopoulos whenever he’s able to travel. So I would not read anything more into it.