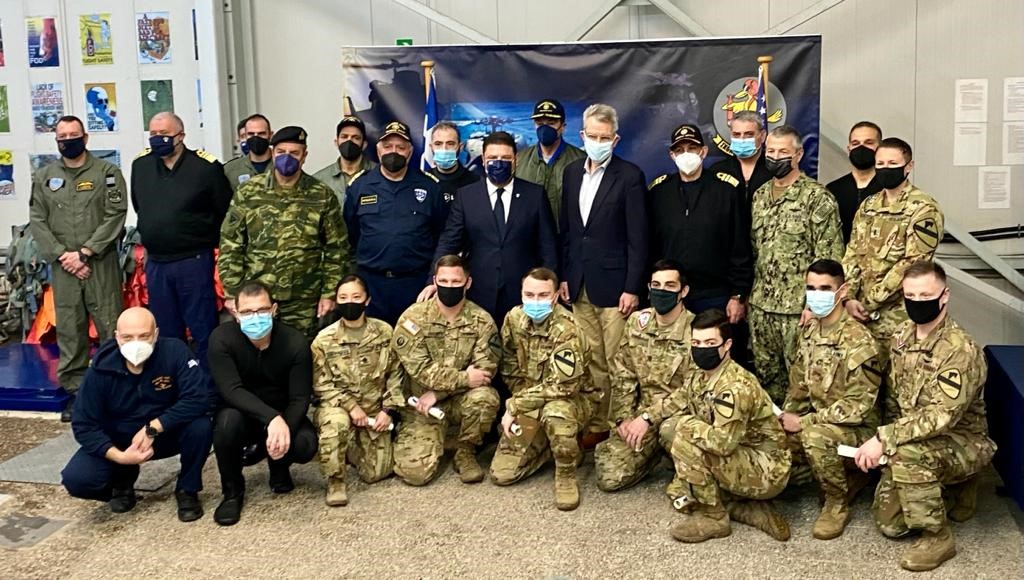 Καλημέρα!  I was saying to the Deputy Minister I was very glad that it wasn’t us in the dunker today.  But we are very, very grateful to see this further demonstration of the fantastic partnership between the Hellenic Armed Forces, the Hellenic Navy in this case, and the U.S. military.

Right now, we have about 400 soldiers from the 7-17th Air Cavalry Squadron up at Camp Georgoulas.  This is part of the annual rotation of our Combat Aviation Brigades.  This is a U.S. Army helicopter unit, about 28 aircraft, who have been working and exercising every single day at Volos and Stefanovikeio with their Hellenic Army counterparts.

I was very encouraged to hear from the Commanding Officer of the 7-17 how busy they have been and the quality of their cooperation with the Hellenic Army aviation units that they are embedded with.  They are working together every single day.

I want to say, also, finally, since we are here at a Hellenic Navy airbase, how very proud we are of the incredibly strong partnership that we have with the aviation elements of the Hellenic Navy.  We are in the middle of a major upgrade program to the P3s.  Greece next year will take delivery of the first MH-60 Romeos anti-submarine warfare helicopters, the most capable aircraft of its type.  And we are also cooperating on the upgrade and life-cycle extension of the S-70s.

We have a lot going on with the aviation side of the Hellenic Navy.  And, of course, our two navies work together every single day.  That is especially the case right now, as we have the Harry Truman Carrier Battlegroup operating very near Greece – it was off of Kefalonia yesterday, I saw – and a number of other U.S. Navy and 6th Fleet assets intensively engaged with our Greek Allies both here on the Ionian side, but, also around Crete.

So, again, Minister thank you for inviting me to come along today, and thank you to our hosts at the Hellenic Navy.  Efcharisto poli.

Question: We saw a demonstration today between the Greeks and the Americans, over here in Kotroni.  This is a part of the cooperation of Greeks and Americans as a part of Stefanovikeio, am I right?

Ambassador Pyatt:  Exactly.  And it’s a perfect example of the synergy between the Hellenic Armed Forces and the U.S. military.  In this case, we have U.S. Army personnel from Fort Hood, Texas, who have been deployed at Volos and Stefanovikeio.  They are here with the Hellenic Navy getting their certification to operate over water, learning how to survive in a water crash scenario.

It’s very encouraging for me to hear from our soldiers at Stefanovikeio how close their partnership is with the Hellenic Army, and the commitment from both sides to doing even more together as we maintain readiness and leverage the facilities that we have agreed to cooperate at under the rubric of our expended Mutual Defense Cooperation Agreement.