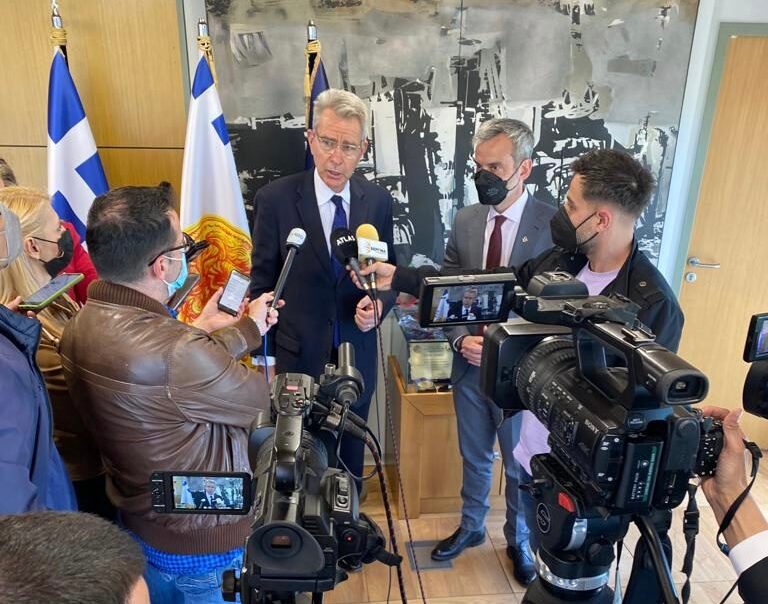 Kalimera.  Let me start by saying what a wonderful pleasure it is for me to be back here in Thessaloniki. And I’m especially grateful, both for the hospitality of Mayor Zervas, but also for the wonderful partnership that we have had on so many important issues, including the event that brings me to Thessaloniki today, which is the Cisco Digital Innovation Center.

It’s so encouraging for me to see the way in which American companies like Cisco, and Pfizer and Deloitte are reinvesting in this city, because they see the promise of its young people.  But also they share the vision that inspired me in 2018, when we put together the Thessaloniki International Fair, that this city should have a vital role, not just as Greece’s second capital, but also as a gateway to all of the Western Balkans.  And that is reflected in the various municipalities, from Bulgaria, from the Balkans and all over Greece, that are participating in this Cisco event.

I also want to say a quick word of gratitude and appreciation for the leadership that Greece continues to exercise in the face of Russia’s terrible invasion of Ukraine.  And, in particular, the hospitality that this city has provided to thousands and thousands of Ukrainian women and children who are fleeing the violence that Vladimir Putin has inflicted on their country.  It is a reflection of the humanity and the philotimo that I have come to know so well in this part of Greece over the past five and a half years.  It’s the right thing to do.

And I applaud, in particular, the Mayor’s commitment to work on issues – education, housing, accommodation – so that these brave Ukrainians can get on with their lives until they defeat Vladimir Putin and are able to return home.

So Mayor, I will have so many memories of my many, many visits to this beautiful city.  I thank you.  I have said I have never seen the city look as good as it looks right now on this particular day.  And I’m very proud of all that we’ve accomplished.

I’m extremely proud of our Consul General Liz Lee.  And I know that the team that I am leaving behind at the Embassy will be able to build on a very strong foundation.