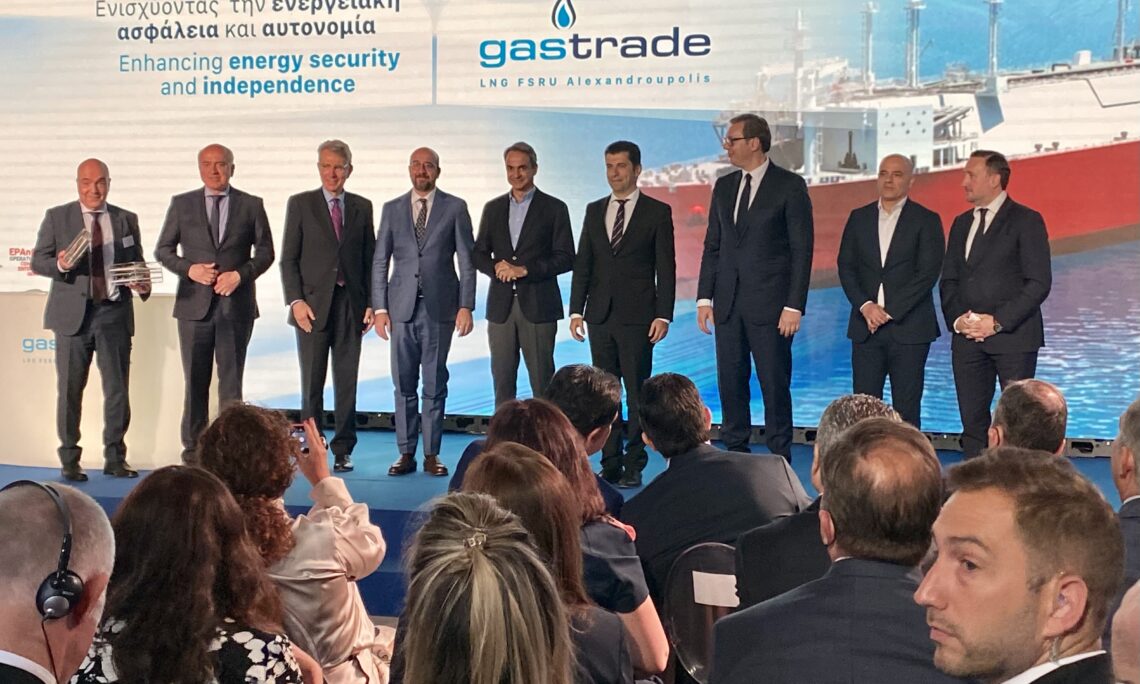 Kalimera.  Let me say what a fantastic honor it is to have this event here in Alexandroupoli be my final engagement as American Ambassador to the Hellenic Republic.  In 2017, I came to Alexandroupoli and we began a systematic effort on behalf of the United States government to lift our engagement here, but also to support the emergence of this city as a critical strategic node — for transport, for military logistics, but critically also for energy.

After Russia’s brutal invasion of Ukraine on February 24th, we saw precisely how important that investment was.  I am so proud that the United States has been able to partner with the Greek government, with the European Union, with our local partners here in Eastern Macedonia and Thrace to bring this project to reality.

You heard some very important messages today from the leaders of Greece, the European Union, Bulgaria, North Macedonia, Serbia, all of whom are united in their commitment to work together to build the region’s energy security and resilience and to improve the lives of the region’s citizens.

I want to offer one other quick comment.  This weekend, I will hand the leadership of the U.S. Embassy in Athens to George Tsunis.  Ambassador Tsunis, I know, is well prepared for his new responsibilities, will bring to the office great enthusiasm, great commitment.  But he will also bring a private sector focus on delivering results.

This project is exactly that example.  It demonstrates the translation of a diplomatic and political vision into practical investment and progress that will build a better future for all of our citizens.

Thank you so much to all of the partners here, especially in the media, from Eastern Macedonia and Thrace, and so many friends I’ve seen over a number of visits to Alexandroupoli, I’ve lost count at this point, it maybe seven or eight.  But this has been one of the great honors of my almost six years in Greece.  And it’s a wonderful coincidence that my departure coincides with this very important ceremony today.  Efcharisto poli.

Today’s event demonstrates the importance of having a vision and following it through.  I really congratulate everybody in the Greek government and all of the partners who’ve been part of this from the beginning.

The FSRU today is so much more important than it was the first time I talked about it when I came here in 2017.  It is critical to the energy security of all of the countries of southeastern Europe.  You’ve heard that today from the President of Serbia, the Prime Ministers of Bulgaria, North Macedonia, President Michel from the European Council, and, of course, Prime Minister Mitsotakis.

I think it’s so powerful to have this as the key example of regional cooperation.  It demonstrates the kind of leadership that Greece is exercising.  It also shows us how much the map of this region has changed over the past several years.

Alexandroupoli has become a geostrategic crossroads.  You have the President of the European Council coming here for this event.  You have the leaders of four different governments all here.  It’s incredibly exciting.

I’m very proud of the role that the U.S. government, the U.S. Embassy has played in helping us to get there.

And lastly, I will emphasize how confident I am that Ambassador Tsunis, when he takes the reins of Embassy Athens in three days, when I depart, I’m very confident that George is going to be well prepared and enthusiastic about sustaining this effort and continuing American leadership in a strategically vital part of Greece on a set of issues that is so important to our larger strategy for this region.