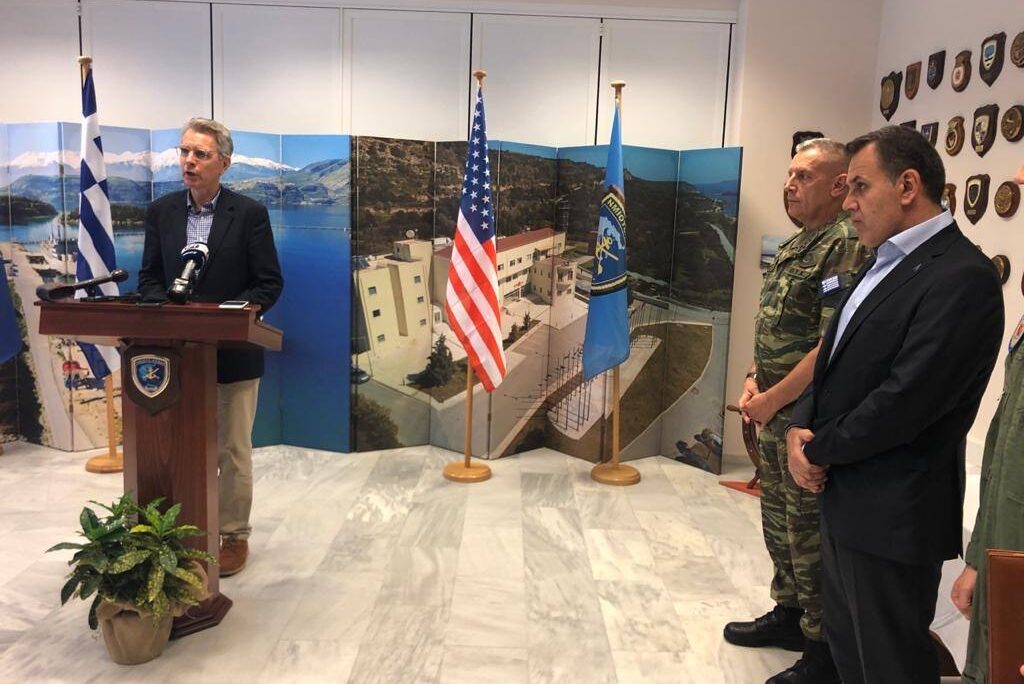 Καλημέρα σας.  Let me start by saying what a great honor it is for me to be here at Souda Bay with Minister Panagiotopoulos and the Chief of Hellenic Armed Forces General Floros.  Minister Panagiotopoulos has appropriately called Souda Bay the jewel in the crown of U.S.-Greece defense cooperation, and I think we have seen today why that is so true.

Souda, for the United States government, plays two critically important roles.  First of all, it is our most important platform for the projection of American power into a strategically dynamic Eastern Mediterranean region.  From Syria to Libya to the chokepoint of the Black Sea, this is a critically important asset for the United States, as our air force, naval, and other resources are applied to support our Alliance obligations and to help bring peace and stability.

But the other aspect of Souda Bay, which is less well known, is that this is the most important venue for day-to-day cooperation between Greek and American forces.  I’m extremely proud of the partnership that we have here, and the way in which all of our services with the Hellenic Navy at the Souda Bay pier, with the Hellenic Air Force at the topside base, and the Hellenic Army at NAMFI, work every single day with our Greek counterparts to build the kind of habits of cooperation that are the essence of our alliance.

I’m also very proud to be part of the deepening of our partnership with the Hellenic Special Forces community.  We had the fantastic opportunity today to go out with some of our Special Forces teams who are based here in Souda Bay – one of the units from my hometown of San Diego – and to hear from them the value that they place on the opportunities they have here at Souda Bay for training, for cooperation, and for developing their own capacities, and the ability to apply the unique tool that the U.S. Special Forces community represents. So I want to thank SOCEUR and all of our partners at Special Forces command for what they do also to bring substance to our cooperation.

Finally, I want to say a special thank you to Captain Tewell, the Commander of NSA Souda Bay, who is finishing up his tour in the next few months and will go back to a stateside assignment in the United States, but this is a critical assignment for the Navy in Europe, and he has been a fantastic partner for all of us at the Embassy in Athens in helping to add substance to this relationship.

It’s very appropriate that we’re finishing up our time at Souda Bay here at NMIOTC, a fantastic NATO asset which the United States has been involved with for more than a decade since its creation.  I was especially pleased to hear from the Commodore about the work that NMIOTC has done to help train and prepare forces which are deploying as part of Operation Irini, the EU mission to enforce the embargo in Libya.  The United States supports Operation Irini and shares with our Greek Allies the conviction that the solution to the war in Libya is for the cessation of external powers, all of them, that have been pumping in weapons and forces to deepen the violence to the south of Crete.

Finally, I want to note how useful it is that we have the Minister here before he goes to Washington DC for his first official visit with Secretary of Defense Esper. The U.S.-Greece relationship today is stronger than it has ever been. That was made clear when Prime Minister Mitsotakis was at the White House in January. But one of the strongest pillars of our multifaceted relationship is our defense cooperation, and Souda Bay illustrates why that is of such value to the United States, and why we are committed to continuing to invest in that partnership and to build the strongest possible alliance between our two democracies to bring peace and stability to this complicated and oftentimes difficult region. Ευχαριστώ πολύ.