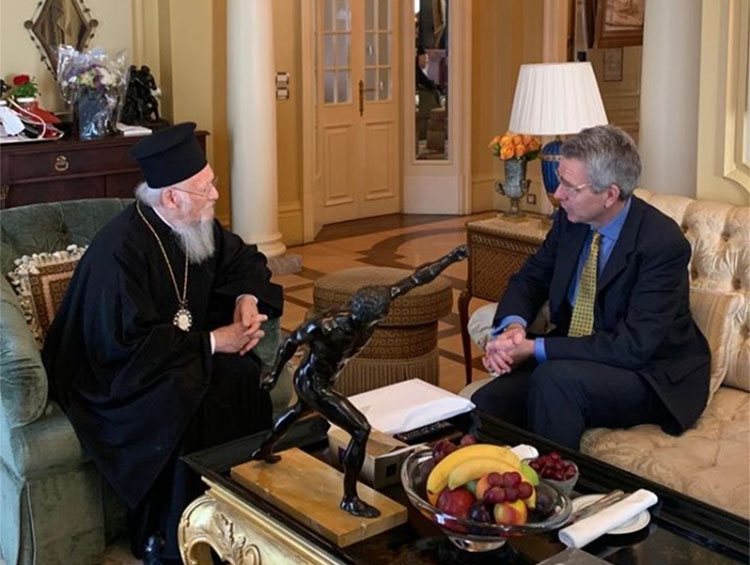 Καλημέρα. So let me say, first of all, it’s always a great honor for me to see Ηis All Holiness. This was an especially important conversation between us because we were able to discuss the plans for welcoming Ηis All Holiness in Washington DC this autumn. This will be the first visit by the Ecumenical Patriarch to the United States in about a decade, and it will come at a particularly important moment in the life of the church. Of course, there will be a new archbishop in North America, and I was able to convey to Ηis All Holiness the great enthusiasm for the arrival of Elpidophoros as the new Archbishop of North America, and our commitment at the governmental level to doing all that is appropriate to help him begin his mission successfully in the United States. But we also talked a little bit about the critically important role that the Ecumenical Patriarch plays as a religious leader on a variety of other issues: in the Middle East; of course in Ukraine, where the voice of His All Holiness is so important; and across the wider Orthodox world. So it was a great honor to see him, as always.

Ambassador, on Turkey: does the American administration have anything else in mind beyond rhetoric, if Turkey proceeds drilling?

So I’ll answer that two ways: first of all, I should say, there was a very clear statement from the State Department again yesterday on the question of the S-400 and the consequences of an S-400 acquisition. I’m not going to get into hypothetical scenarios regarding the situation in the Eastern Mediterranean, but I will say that I am just back from two days meeting with my colleagues from across Europe and our military leadership at European Command, and there is great appreciation for the prudent approach that the Greek government continues to take, and I would include in this regard our appreciation of the efforts that have been made this week with the reinitiation of talks between Athens and Ankara on military confidence-building measures.