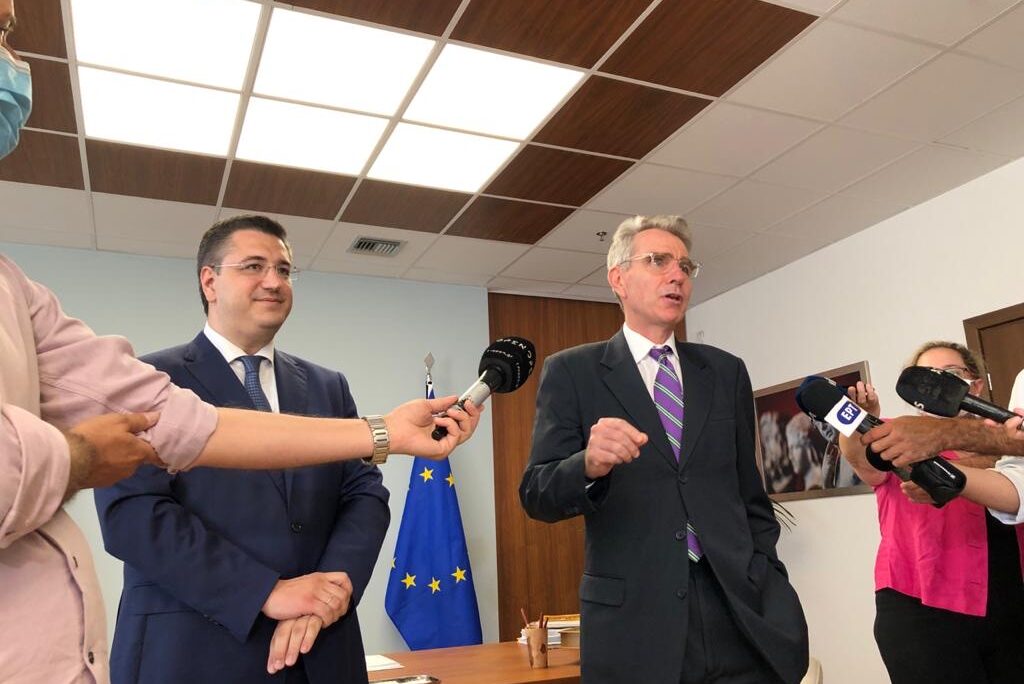 Καλημέρα σας.  Let me start by saying what a pleasure it is to be back in Thessaloniki with my friend, Governor Tzitzikostas. This is the longest that I have been away from Thessaloniki during my four years as American Ambassador in Greece, but it was very important for me to come up now in July, both to touch base with the Governor, with the authorities here.  I started the conversation today by congratulating Governor Tzitzikostas on the very strong performance of the Greek government in its management of the Coronavirus pandemic, the smart way that northern Greece and indeed the whole country has dealt with this global challenge.

But also to mark the conclusion, as the Governor said, of Greg Pfleger’s fantastically successful two years as America’s representative here in Thessaloniki.  This has been an extremely dynamic period of U.S.-Greece relations, which are stronger today than ever before.  I’m particularly proud of what we have accomplished here in Macedonia with the Thessaloniki International Fair in 2018, with the significant upgrade of our defense and security engagement in northern Greece, the rotations of our helicopters through Thessaloniki, our activities in Alexandroupoli, but especially important on the investment and economic side.

As the Governor alluded to, we have a very strong record of American companies that, even in the environment of the pandemic, are continuing with their new investments here.  I’ll be visiting over the course of the next two days with both Cisco and Pfizer, two top-tier American companies that have come to Thessaloniki because of the talent that they see here, the human capital, and their interest in Greece and Thessaloniki as a platform for engaging the whole market of the western Balkans. That’s already happening with the Deloitte Center of Excellence which I was able to visit in the fall.  So we look forward to building on that momentum now.

I have said in Athens that our Embassy’s top priority at this stage, with the health crisis hopefully behind us, is to focus on supporting Greece’s rapid return to economic growth. American companies, American investors, are going to play a critical role in that regard, and a big part of the story is happening here in northern Greece, not just because of what’s happening in Thessaloniki, but because of the way in which Greek Macedonia is serving as a gateway for a 30-million strong market in the western Balkans.  So we are committed to maintaining our momentum here.

As the Governor said, I will come back in August with our new Consul General, Liz Lee, who has very big shoes to fill, but has a fantastic reputation, and will enjoy the same support and partnership with the Governor and with me and with our Embassy team that Greg has been able to take such advantage of over the past two years.  So, Governor, thank you very much. We’re not stopping, we’re going to keep working, and we’re not going to let the pandemic slow us down.

Journalist: Mr. Pyatt, I would like to ask you, Turkish officials and Turkish press also said that Hagia Sofia until this Friday, is going to be a mosque. Will you please give us a comment?

If I talk about Turkey, nobody will pay attention to what I say about the economy and the investment.  So I will simply refer you back to the very clear statement that my boss Secretary of State Pompeo issued last week regarding our hope and expectation that Hagia Sofia will retain its status as a global cultural site.

Journalist: Just a comment about how Turkey has reacted to Washington’s military training program in Cyprus.

I’m not going to talk about Cyprus today.

Journalist: Minister of Defense Nikos Panagiotopoulos cancelled his visit due to Coronavirus, or is there another reason?