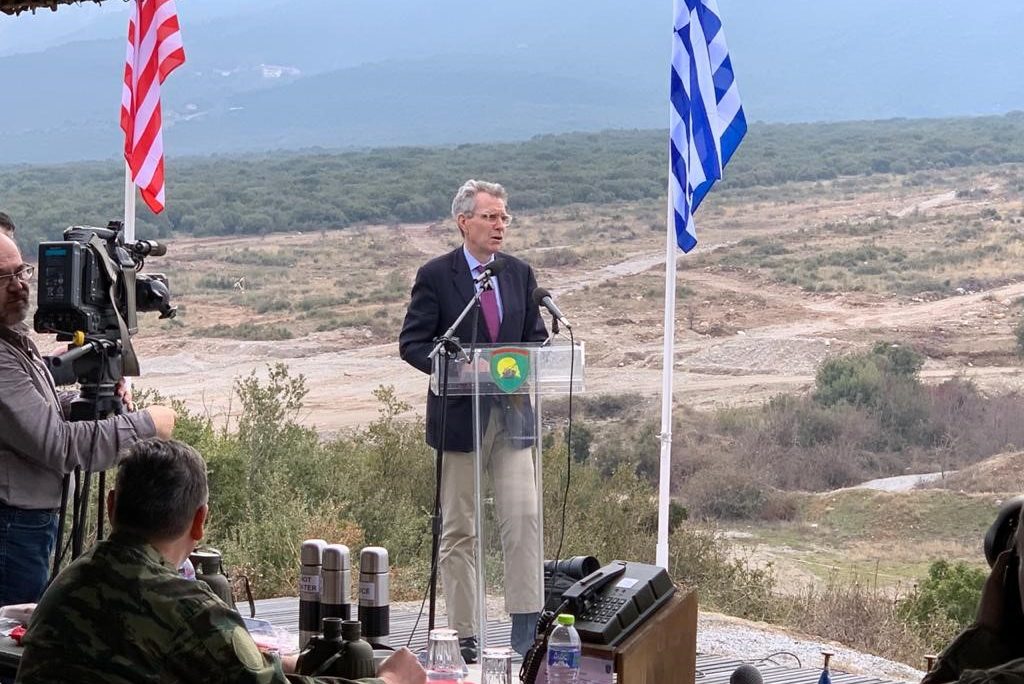 I just want to say, first of all, I think you saw fantastic evidence of what I was talking about in Stefanovikio, which is both the unique operating environment that Greece provides, the way in which this range facilitates the enhancement of interoperability between the United States and our Hellenic Armed Forces Allies. But also, to see the quality of the cooperation, the way in which Hellenic and American forces were working together was, for me, tremendously impressive. It was good for me to hear from the 3-17 about the quality of cooperation which they have enjoyed here in Greece, some of the best anywhere in Europe, but also the unique opportunities created by the fact that our pilots are operating the same aircraft, that we use the same NATO nomenclature, and we are committed to fighting and working together.

This exercise is going to feed in now as the 3-17 moves up to Poland, where it will be part of Defender 2020, the biggest deployment of U.S. troops to Europe in over 25 years, a deployment that demonstrates our strong commitment to freedom and stability in Europe, and our commitment to our NATO Alliance. It is a purely defensive exercise, demonstrating our ability to move a very large force from the United States to Europe to protect our Allies and ensure NATO forces can operate together in peacetime and to prevent conflict. Again, this is all about interoperability. What we’ve seen today is also fantastic preparation for Defender 2021, which will be focused in southern Europe, where Greece will play an important role by hosting part of the exercise, and we expect taking advantage of facilities including Alexandroupoli. So our work to develop interoperability with our Greek allies is critically important and will be even more so in 2021 as we work together to celebrate the bicentennial of the Greek War of Independence. And I have to say, in closing, how tremendously humbling it is to be here at the foot of Mount Olympus, the home of the Greek gods and one of the most beautiful corners of Greece. And I can promise, as soon as I’m back on my feet 100%, I’m going to get to the top. So thank you very much. I’ll be happy to take a couple of questions.

Journalist: Can you tell me how this will help the Greek military and your plans to expand your presence in this country after the agreement?

Ambassador: So we already helping to the build capacity of the Hellenic Armed Forces. I think you all saw when we left Stefanovikio, the newly delivered Kiowa helicopters. This is a significant augmentation of the capacity of the Hellenic Armed Forces, which we are working together now to develop and to deploy. That’s one example. Another, of course, are the opportunities and the improvement in capacity that comes from our forces working together. Both sides learn from these exercises, whether it’s here on land, our Naval Forces working together out of Souda Bay, or our Air Forces flying together in exercises like Iniohos. So this is not about one side taking from the other, it’s about building capacity as allies. It’s also about sending a message of reassurance as Secretary of State Pompeo said in his letter to Prime Minister Mitsotakis. We’re committed to standing by Greece, to the security and prosperity of this country. The presence of our Armed Forces here today is a powerful indication of that.

Journalist: Mr. Ambassador, is there a next step of elevating the military collaboration between Greece and the United States?

Ambassador: So I think that’s really up to the Greek government. Prime Minister Mitsotakis, when he was in Washington DC, was very clear that he saw the MDCA not as a ceiling but as a foundation to build for the future. We share that interest. We are now, first of all, we’re going to consolidate what we’ve accomplished with the amendment to the MDCA. We will have a meeting of our joint commission in the weeks ahead which will look at specific projects that we will undertake together, including at new facilities like Stefanovikio and Larissa and Souda Bay. And as we get that done, we also will continue to look at how we continue to develop capacity. The United States really believes in the idea that Greece is a pillar of stability. It is a lynchpin of our strategy for the larger region. I was very interested to hear from General Koutras about the exercise last week and the involvement here, not only of Greek forces, but also of North Macedonia, of Albania, of Bulgaria, of Serbia. Greece plays a unique role in the western Balkans as a stabilizing factor but also a strong NATO Ally that’s committed to our EuroAtlantic community and is committed to working with us to help see all of these countries of the northern neighborhood continue to move towards European reforms, and if they so choose, EuroAtlantic institutions.

Journalist: Thank you, Mr. Ambassador. Today, President Erdogan stated that he’s going to send a drill ship south of Crete, in Greek territorial waters and in Greek Exclusive Economic Zone. So what is your comment on that?

Ambassador: So my comment is two-fold: first of all, I’ve been here in Stefanovikio all day, I haven’t been watching TV. I will catch up with that and I’m sure we’ll have something to say about it. The United States has been very clear. I’ve spoken about this as recently as yesterday on the unhelpful and escalatory nature of some of these Turkish actions. But we’ll have to wait and see exactly what Turkey is planning at this stage.

Journalist: Will you take some actions, sir, to stop Turkish provocations?

Ambassador: I think I just answered that question.

Thank you very much. Ευχαριστώ πολύ. Have a safe trip back, everybody. And again, thank you so much for joining us, and let me again offer my profound thanks to General Lalousis and all of our other allies from the Hellenic Armed Forces, both for the fantastic filoxenia, but also for the way in which they are helping us to improve our readiness and our capacity by building the ability of our forces to fight and work together.