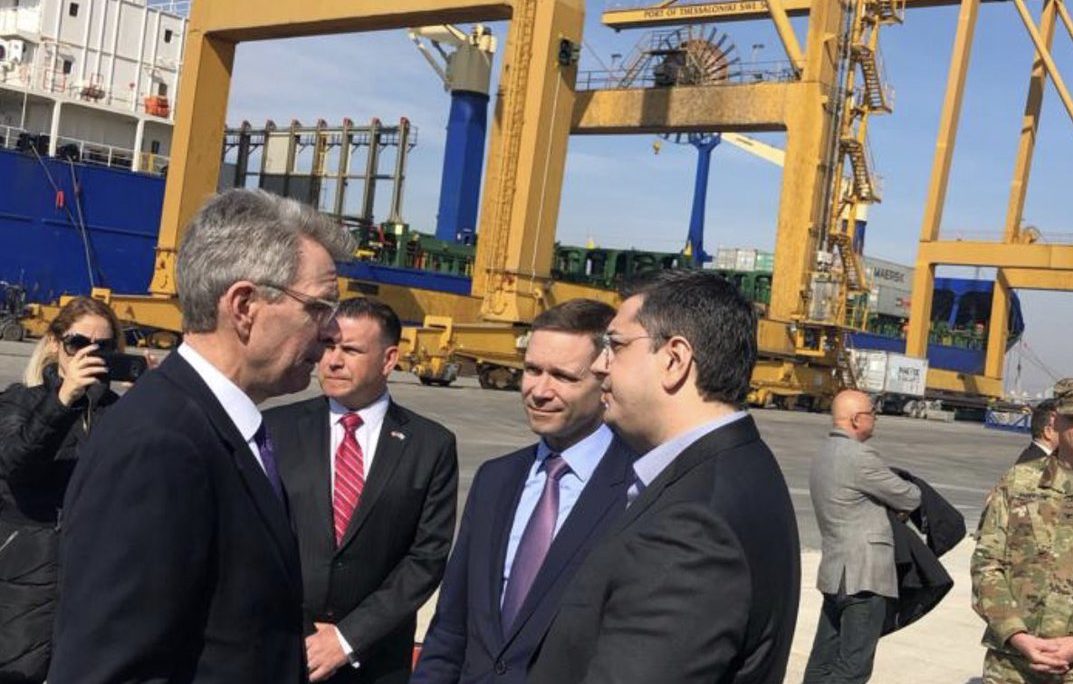 Kalimera, well, first of all, let me say what a great pleasure it is for me to be back here in Thessaloniki. I am especially honored to be joined this morning by Governor Tzitzikostas Governor, Vice Admiral Paxivanakis and many other partners from the Hellenic Arm forces.

I was here today first of all to thank the soldiers of the 4th CAB Aviation Brigade for their service, but also to hear their evaluation of their experience this winter as they spent several months living and working at Stefanovikio.

I was incredibly encouraged to hear from the Major and from the soldiers of the 4th CAB their very positive evaluation of their experience here in Greece. Both their great respect for their counterparts from the Hellenic Army, but also the fantastic opportunities that they enjoyed here to exercise, to take advantage of the unique geography that Greece enjoys, the ability to have high altitude operations, landing at Mountain Olympus, overwater operations, live fire exercises on the Greek Army ranges. I am very impressed to see what a complicated, logistical undertaking it is to bring an army unit like this one here to Greece.

I also appreciate something that Governor Tzitzikostas pointed out, which is that the partnership between our armed forces, our work together in NATO, is a reaffirmation of Greece’s commitment to our alliance, but also America’s commitment to Greece. We are, as you’ve heard me say on many occasions, extremely focused on Northern Greece, building on the momentum we enjoy from our presence at the Thessaloniki International Fair, but also helping to reaffirm the opportunities here. I am very pleased that we are joined today by Mr. Theofanis, the manager of the port, to see the new cranes. We are interested in the success and the vitality of the port of Thessaloniki, because that connects to our interest in the success and vitality of Northern Greece, the regions of Macedonia and Thrace.

Last point I will make, there is a lot of attention right now, of course, to the implementation of the Prespes Agreement. I remain convinced that the greatest beneficiaries of the Prespes Agreement are going to be right here in Northern Greece as Thessaloniki is restored to its historic role as the capital of the Balkans, the gateway for the Western Balkans to global markets, and the Thessaloniki port is obviously a key part of that and I’m glad we’re able to make a contribution through our participation here.

I should also mention I am joined today not just by many of our Embassy team, our Consul General, but also General Shapiro, the Head of the U.S. Army in Europe’s theater sustainment command. General Saphiro is here in support of this deployment but is also travelling on to Alexandroupoli in connection with the next deployment that will happen in Greece of the 3rd CAB  Aviation Brigade and he will be looking at opportunities to leverage the Alexandroupoli port as well, which reflects the commitment that I have made to the Mayor and the authorities there to continue to demonstrate American presence, American engagement in Northern Greece. So thank you very much for coming out today, I hope you guys are going to get to do the same walk around that I did, because it’s really impressive and I think Bill will do one or two questions.

Will you use the Thessaloniki port again for the next operation?

So that’s a decision that’s going to be made by the U.S. Army. Certainly, this is the second time that we have used Thessaloniki.  We had General Cavoli, the Head of all U.S. Army in Europe, out at Stefanovikio last month and he got the same very positive evaluation that I received from the success of the deployment and his instruction to his officers is to plan on being even bigger and more significant in terms of our presence here. So I can’t make any promises today, but everything that I’ve seen suggests that we’re going to continue to take advantage of the opportunities that Thessaloniki provides. We also, as I’ve noted, are keenly focused on Alexandroupoli as well, but I’m confident we’ll be back.