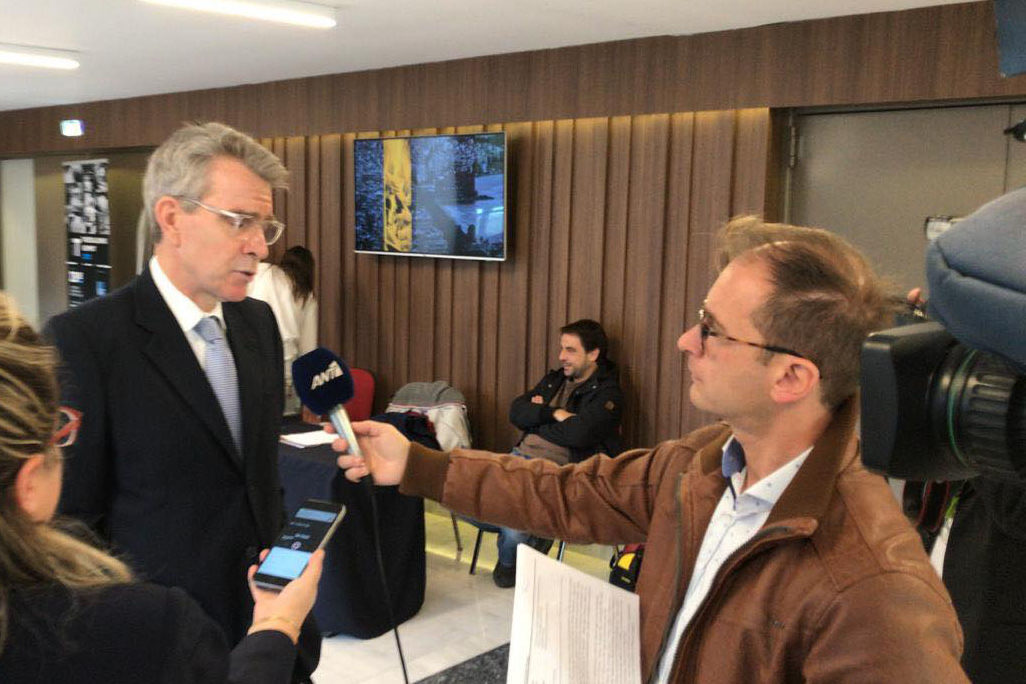 Q: What was the impact of the US participation as the honored country in the Thessaloniki International Fair in Greek-American relations?

We were really delighted at the success of our year as honored country. I think the TIF in 2018 is going to be remembered as a landmark in the U.S.-Greece relationship. When I was in Washington last month, I was really impressed to see how much of an impact the success of TIF had had on impressions of Greece and the U.S. –Greece relationship but also on the understanding of the economic opportunities. And we are committed now to building on that. It’s one of the reasons I’m back in Thessaloniki today, to sustain the positive momentum from the TIF in September but also to help lay the foundation for the U.S.-Greece strategic dialogue, which will launch in Washington next month on the 13th of December with a very large interagency delegation on both sides led by our Secretary of State, Secretary Pompeo and Minister Katrougalos on the Greek side.

Q: Where do we stand today in bilateral relations and how fruitful have your efforts been so far to enhance the American investments and strengthen the economy of Greece?  What does Greece need to do, in order to attract more investment and create a healthier economic growth?

So, we really believe that the U.S.-Greece relationship is stronger today than it has been in many decades. That’s thanks to hard work led from the White House and from Maximou, the Prime Minister, but also reflecting our converging interests. That’s what we’re going to try to consolidate and move forward through the Strategic Dialogue. Clearly, one of the most important pillars of that Strategic Dialogue will be the economic one, our cooperation on trade and investment. We recognize that for Greece, 2018/19 is a critical period to begin the process of sustainable growth. We have also made a strategic calculation that Greece’s economic success is tied to Greece’s ability to play its role as pillar of regional stability, which is the foundation of the U.S. strategy.

Q: Exxon-Mobil, is preparing to drill for natural gas in the Exclusive Economic Zone of Cyprus. Turkey however has challenged the right of the Republic of Cyprus to her natural resources and has threatened to derail the process. Could Turkey create problems in the area and what would the US do in such an eventuality? What is the American position in terms of Turkey’s callings for “casus belli” the right to extend territorial waters to 12 miles, as foreseen in the United Nations Convention of the Law of the Sea?

So, you’ve got a couple of questions there. I will start by saying that I always try to avoid hypothetical scenarios, but the United States has been very clear in reaffirming as recently as this week in Washington the right of Cyprus to exploit its continental shelf. There’s no question about that, and we’ve also been clear in our hope that all sides will seek to dial down the rhetorical tensions. In that regard, I know the Greek government is very interested in continuing to work on maintaining a stable, normal, successful relationship between Greece and Turkey. On the question of the continental shelf and the maritime boundaries that you’re referring to, I would just say two things. First of all, the Greek government has been very clear that for now this step applies only to the Ionian waters, and I was encouraged to see there was a good discussion between the governments of Greece and Italy this week when Prime Minister Tsipras was in Palermo. So, there’s no concern there. And on the question of the Aegean waters, this is something that the Greek government continues to work on, and the United States government as well.

Q: On the military front, how close is the American-Greek cooperation both in the framework of NATO and on a bilateral basis?

So, our NATO and bilateral cooperation, including at Souda Bay, is critically important. I was glad to see Ambassador Lalacos yesterday in Washington, DC for Armed Forces Day, pointing out the importance of that alliance relationship and the progress we’re making. Just this week, for instance, we had a new deployment, a temporary deployment to the air base in Stefanovikio, which will be good for U.S. forces but also good for Greek forces. It creates new opportunities for interoperability, for training, for collaboration. That’s the essence of our alliance. We are here as guests, most importantly, with the support and cooperation of the Hellenic Armed Forces, but we also are very grateful for the fact that we have such excellent cooperation, that U.S. forces are able to work with their Greek counterparts, and that we’re able to pursue shared security interests in terms of making a stable and secure region, which helps the economy, which helps prosperity, but also helps to advance our shared values.