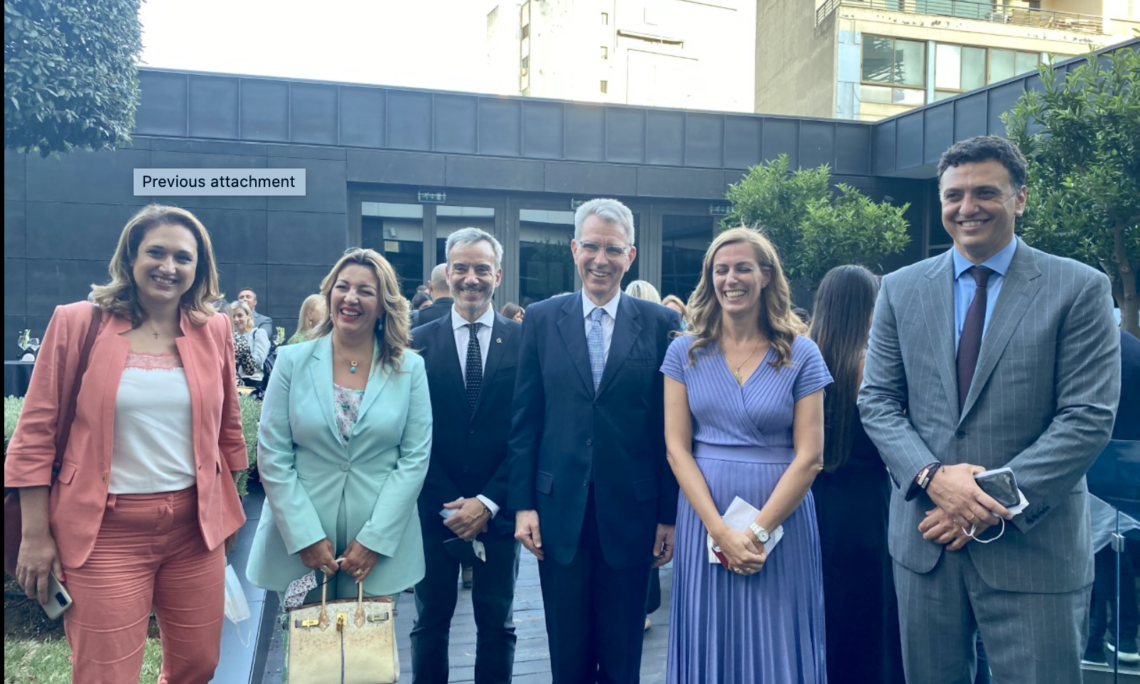 Kalispera to everybody.  Thank you so much for everybody coming out this evening.  It’s fantastic to see so many friends, people I haven’t seen face to face for a long time.  Mayor Zervas, thank you for joining us.  I see Calypso here from the Council.

Let me say what a huge honor it is for me to be part of this event this evening.  I want to start by acknowledging the presence here of Minister of Education Niki Kerameus.  Niki is a lot of things.  She’s a dear friend.  She’s a courageous political leader.  She also has one of the most difficult jobs in the Prime Minister’s Cabinet because of the issues of educational reform that she’s responsible for.

If I can just tell a small story, the Minister was over at my house the other evening for a dinner with two of our visiting Senators from Connecticut and Georgia.  Those are two very different states in American politics, but both states that are grappling with issues of educational reform.  By the end of dinner they basically wanted to hire her to come back to the United States with them to help with what they’re trying to accomplish after hearing all the things Minister Kerameus is getting done here.

Niki is also one of the really iconic representatives of women’s political leadership here in Greece.  So Minister, there’s nobody that I would rather have with us this evening as we celebrate this new program.

I also want to say a huge thank you to May Zanni.  May has been a wonderful partner through Women Act, and I can’t think of a better way to set the stage for this year’s Thessaloniki International Fair than to launch this new project which we are undertaking with our partners in Women Act.

I think it was three years ago at the Thessaloniki Fair that May and I were together with Mareva Mitsotakis and others for the launch of Women Act, Thessaloniki.  Only two.  It’s been a very long year.  [Laughter].

We’ve seen this project grow and grow and grow, and I have to say as somebody deeply invested in the U.S.-Greece relationship but also the effort that we have made as an embassy to support women’s political and economic empowerment, it’s really inspiring to see all that you’ve accomplished, especially here in Northern Greece in places like Thessaloniki and Alexandroupoli which are a harder environment in which to make progress on these issues.

I also want to acknowledge some of our own team that are here this evening.  Liz Lee, our fantastic Consul General up here in Thessaloniki.  Liz marks one year in the job now.  It seems like she’s traveled everywhere in Northern Greece in the course of that year, but I’ve also been so impressed by all the work that she’s done on the women’s political empowerment agenda.

Finally, it’s my great pleasure to acknowledge three of my dear U.S. State Department ambassadorial colleagues.  Our Ambassador to Albania, Bulgaria and North Macedonia.  Many of you know all of them.  They have been colleagues and collaborators over many years, in some cases longer than I care to think about.  But I am so proud to have them as my colleagues and counterparts in these three northern neighbors of Greece, and I cannot overstate how important that partnership has been in terms of helping to leverage all of the successful efforts that the Greek government has been making to strengthen its ties with North Macedonia and Bulgaria and Albania.

So Yuri, Herro, Kate, thank you so much for being here tonight.  I can’t think of better representatives of women’s empowerment in the State Department, in our career Foreign Service.  These are three very senior leaders in our career Foreign Service and I know that there are many other women across the U.S. State Department who look up to all of you.

I’m very happy to be back in Thessaloniki.  As I said earlier today, in many ways this feels like my second home here in Greece.  I long ago stopped counting how many visits I’ve made and I know it’s many, especially for the local employees of the consulate here, I wanted to say thank you for all that you’ve done.

We are partnering with Women Act this evening to launch the Women Candidates Platform which will create the first online community for Greek women interested in politics.  This platform is going to offer live and online learning experiences.  It will help candidates improve their leadership skills, build their qualifications, connect with the support of network, clarify their political aspirations, create a campaign, and eventually run for office.

A few weeks ago May and I and other colleagues had the opportunity to be together in Athens with the Lieutenant Governor for the state of California – another former woman U.S. Ambassador in Europe, Eleni Kounalakis.  Eleni looked out at my living room which was filled with women political leaders, and she commented at one point that in all of her decades of coming to Greece she had never been in a room like that.  For me, that was an incredibly powerful moment in clarifying both the work ahead, but also the prospects for moving forward.

So I’m incredibly excited about this.  We’ve done a lot with Women Act already at the Delphi Forum.  Thank you Simeon, I saw you somewhere around here.  But we’re by no means done.  We’re going to do more, not only here in Northern Greece but across the country.

Part of the reason that we wanted to launch this Women Act program tomorrow here in Thessaloniki is because Women Act has been doing so much in recent months to focus on this part of the country.  I’m incredibly excited to see where this all leads and what we get done.

There are so many amazing women leaders here in Greece that I have met over my five years.  I mentioned Minister Kerameus already.  There’s your inspiring President, President Sakellaropoulou who I have heard speak with such passion on issues like the status of women in Afghanistan, the question of women’s economic empowerment across societies including in the United States, and the challenges that women face in entering politics, whether it’s in the United States or here in Europe or elsewhere.

But I’ve also seen the power of networks.  I remember a few months ago I was in Nemea.  I met with a young women who was a new member of the Nemea City Council.  Nemea’s a very traditional agricultural area of the Peloponnese.  But she was looking up and she mentioned the example of President Sakellaropoulou and the inspiration that provided to her to become involved in electoral politics.

As in the United States, I know that politics is not always easy and I see several friends around the patio this evening who know that lesson much better than I do, but I’m extremely excited and honored that we’re able to be part of this process.

I want to say a huge thanks to our public affairs team who do so much of this work, especially Cindy Harvey who’s hiding in the back there; and Eleni Alexaki without whom I don’t think the embassy would be the same.

May, thank you for being with us.  I’d like to give the floor for just a minute to Minister Kerameus, and hope everybody will enjoy this beautiful evening in Thessaloniki. Efcharisto poli.