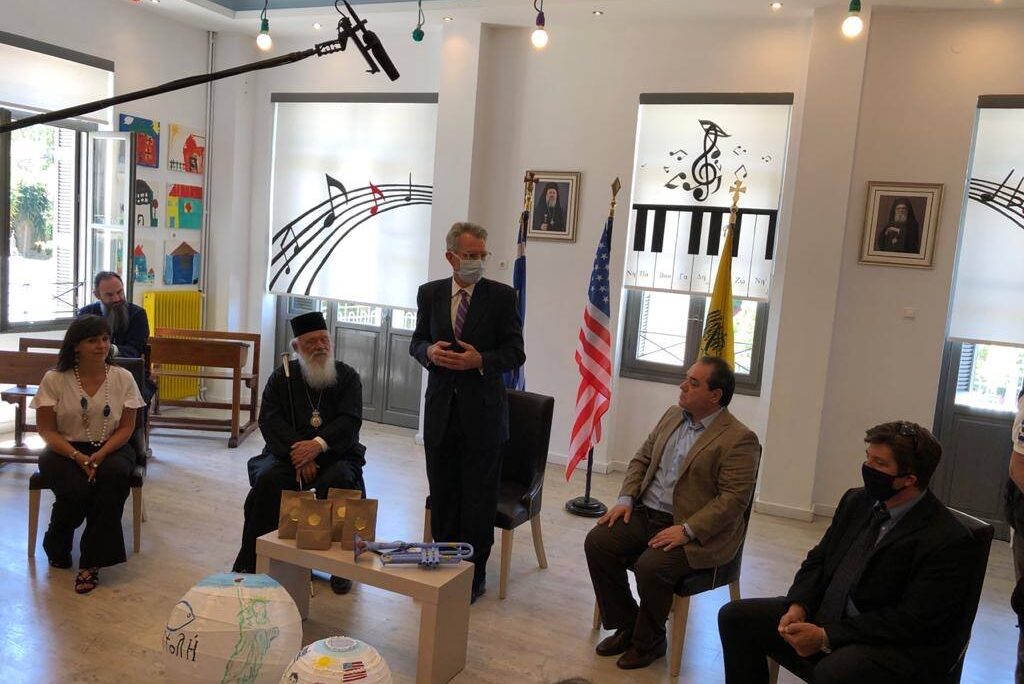 Καλημέρα
. Good morning, everybody. Mr. Dimtsas, Your Eminence, let me say again what a great pleasure it is for me to be here with you today as we celebrate our American Independence Day.

I remember, Your Beatitude, four years ago when we first met, you talked to me about the work that was done by Apostoli and about the important support that you and the Church received from our diaspora in America. This support reflects the best traditions of American philanthropy but also the deep and long-lasting ties between our two peoples.

Normally today we would have a huge reception at my residence to celebrate our day of independence. Obviously, we could not do so this year because of the pandemic, but we wanted to do something to celebrate the holiday and as soon as we came up with this idea, I was certain that Apostoli would be the appropriate partner for this gesture from our Embassy.

So, I hope you will see these meals and this gesture as a small symbol of the long-standing ties between our peoples and between the Church in North America and the Church here in Greece. And I think it’s especially special, having now seen the role that Archbishop Dimitrios played in the creation of this center.

To all the kids, I would say, first of all, I hope you will enjoy a little bit of our 4th of July American Independence Day tradition, not just the meals from the American Embassy kitchen but also some candy from America.

I also want to help you to appreciate how important the relationship between Greek Independence and American Independence has been. Greece is a very ancient country as I’m reminded every time I look at the Acropolis, which was constructed 2,500 years ago. 244 years ago, when we earned our independence in America, the founders of my country were specifically inspired by Athenian democracy and the lessons that the Athenians taught about justice and democratic society. And then 199 years ago, when Greece began its war of independence, my country, which was very, very young at that point came to the support and assistance of the Greek independence fighters.

And finally, if I can just say to Your Beatitude, thank you for four years of friendship, your openness, your dialogue and your partnership with the American Embassy. We greatly respect your office but also the leadership that you have shown during this especially testing time for the international community as we responded to the coronavirus pandemic. I know that your decisions and your leadership have helped to save lives here in Greece. So, ευχαριστώ πολύ. And for all of the kids, Ζήτω η Ελλάδα, Ζήτω η Αμερική!