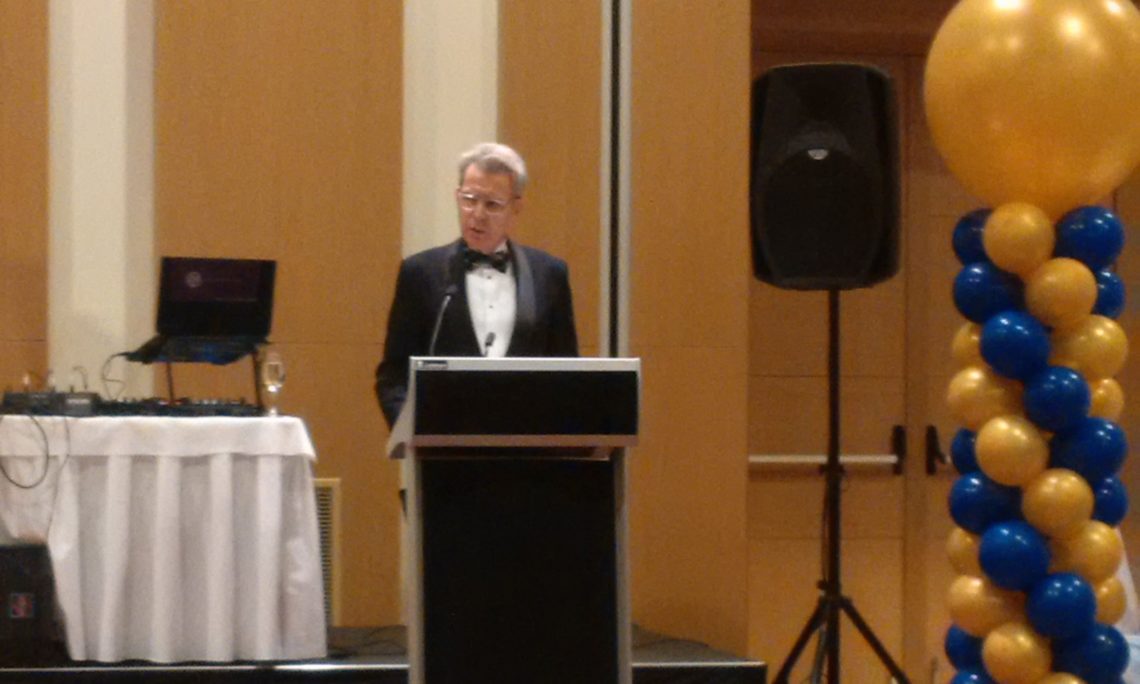 I apologize if I sound a bit jet lagged, but I’m just back from Washington, and did not want to miss this opportunity to honor the birthday of an organization that has done so much to secure the institutions our nation holds so dear; from the valor of the Continental Navy in securing American independence, through the struggles of the two world wars fought here on European soil, up until today, as we fight against the new threats of global terrorism, the U.S. Navy has been at the forefront in protecting freedom and democracy around the world with courage and distinction for 242 years.

As a native San Diegan who grew up in one of the world’s great Navy towns, I have a special respect for what the Navy represents and I am humbled by and thankful to all of you for your service. Captain Collins, thank you for inviting me to take part in the celebration.

Thank you also to the representatives of the Hellenic Navy who are here with us tonight.

While we honor our U.S. Navy’s long history tonight, we are proud to do so alongside allies whose forefathers were winning naval battles 2,500 years ago, whose Athenian democracy inspired America’s founders.  The ancient navies of the Greek city-states established the tradition of protecting democratic ideals on these seas — a practice we are honored to continue as your comrades in arms today.

The partnership of our two navies is critical in advancing two of my top priorities as the U.S. Ambassador: supporting Greece, our EU and NATO ally, in its economic recovery, and working with Greece to sustain and deepen our defense, security, law enforcement, and counterterrorism cooperation.

Since our nation was founded, the U.S. Navy has deployed to defend our interests and values around the world.

In today’s increasingly complex global security environment, the Navy continues to provide constant forward-presence in areas where our interests are most challenged.

The Navy also protects global shipping in support of economic growth and prosperity.

Roughly 90 percent of all world trade is conducted on the seas, and a strong, capable force supported by allies is essential to our ability to protect shipping lanes.

International stability, supported by the Navy’s forward-deployed global forces, enables economic prosperity and growth – at home and around the world.

Along with our partners in the Hellenic Navy, we have here in Souda a model for bilateral military cooperation, two allies pursuing the same goals.

It has been over 40 years since the U.S. Naval Detachment at Souda Bay was commissioned in 1969 with only 16 personnel working here at that time.

Today, Naval Support Activity Souda Bay is comprised of approximately 250 commissioned and enlisted personnel and approximately 650 U.S. and local national civilians and contractors.  This growth speaks to the growing defense cooperation between our two nations, as well as the strategic importance of the base.

It is because of our close partnership with Hellenic military and government that NSA Souda Bay has become a superior logistical support hub for our forward-deployed units.   Thank you for your continuing efforts and support.

Recent military operations have further underlined Souda’s significance in the Mediterranean. The base is dedicated to taking care of the fleet and airborne operations in this strategically critical area of the world, and to deepening cooperation with our Greek Allies.  As we’d say in America, this is where the rubber meets the road.

In addition to the Navy’s birthday tonight, we are also marking the 75th anniversary of World War II in the Pacific — and particularly the Battle of Midway that turned the tide of the war.

For the past 75 years, the U.S. Navy’s constant global presence ensures security and stability for our allies as well as prosperity worldwide.

More than battles and bullets, our Sailors’ toughness, initiative, accountability, and integrity made us victorious.

Inspired by the same attributes as “The Greatest Generation” that fought 75 years ago in the Pacific, today’s Sailors and civilians carry on a two-century tradition of warfighting excellence, adaptation and resilience.

To the many U.S. sailors in the room who are part of this long tradition of excellence, you represent the United States Navy and the United States to the people of Crete and to Greece, I want to thank you for representing our country and supporting the fleet on a daily basis.   You are the best of America, and it is an honor to toast you tonight.