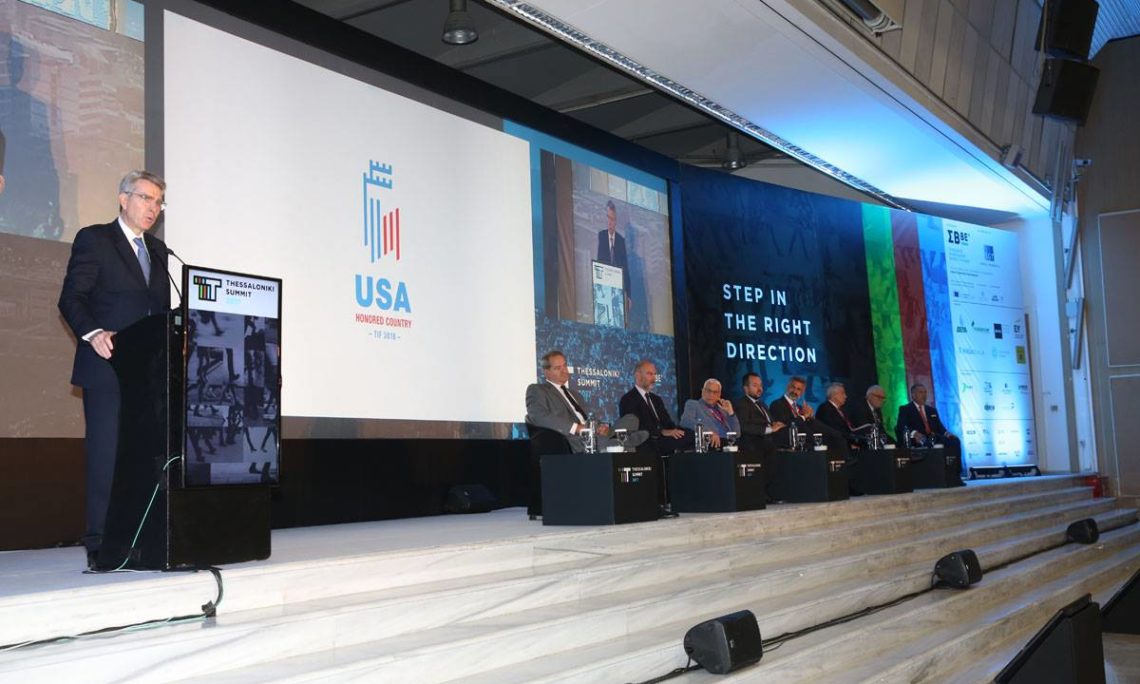 Ambassador Pyatt:  Good afternoon.  Thank you, Tom, for the introduction.  I want to start by thanking Athanasios and the Federation of Industries for Northern Greece for organizing this  conference and for inviting me to participate.  It’s really an honor to be among such a distinguished group.

I also want to thank my partner Simos for making sure that the American-Hellenic Chamber of Commerce is here leading the charge and helping American business and investors remain interested in northern Greece.

As you said, Tom, I do have something special to share with our audience today, and I’ll get to that in a moment.

As we’ve discussed many times I believe that northern Greece plays a critical role both strategically, in terms of its important ports, ability to be a European energy hub, and historic position as a gateway to the Balkans, but also economically, as an entry point for foreign and especially U.S. investment.

As for me, this is my second trip here in the past month and my 7th in my first year.  Thessaloniki has made a strong impression throughout my first year in Greece.  It is a uniquely cosmopolitan city, a “city of ghosts” whose food, memorials, and architecture invoke its historic role as a cultural and civilizational crossroads.  I plan to keep coming back as much as I can.

And I’m glad Simos is here on this panel with me, because one reason for the frequency of my visits is going to be our cooperation in making the 2018 Thessaloniki International Fair, with the United States as honored country, an event not to be missed with a big positive impact for America and Greece, northern Greece in particular, and our bilateral relationship.

So, as part of that effort, I am extremely proud today to unveil, for the very first time, our TIF2018 logo.  There it is.  [Applause.]

This is the result of a lot of work, collaborating with our Greek partners, with AmCham, and with an amazing Greek design firm called White, which created this wonderful combination of Thessaloniki’s most internationally recognized landmark, Ο Λευκός Πύργος, with the stripes and colors of our American flag.  We designed it to evoke the feeling of taking off, heading upward and taking us all to new heights, just like innovation and the digital economy, key themes for our pavilion next year.

So you will see much more of this logo as we begin our preparations for TIF2018, and we hope it will become an internationally recognizable symbol of the great work we are all doing to bring our countries together.

You can sum up this closeness and the win/win character of our relations in a few statistics that don’t get enough attention, in my view.

The depth of our partnership also stood out last June when I went to the U.S. with Minister Papadimitriou accompanying a robust contingent of Greek companies to the SelectUSA investment summit.  There was especially strong northern Greek participation from firms like Pyramis metals, Baresquare software, Kouimtzis equipment, National Can Hellas, and Ergon Foods.

I can single out Pyramis as a good example of Greece’s export success as well as what can happen at SelectUSA.  Pyramis is a top supplier for IKEA and for the U.S. market in particular.  It has maintained quality and global competitiveness through investments of more than 17 million euros over the past decade in new technologies and automation.  The company is growing globally and is currently considering new investments in the U.S., having taken the opportunity of SelectUSA to begin a dialogue with several U.S. states for an additional U.S.-based manufacturing plant.

Importantly, our economic and commercial relationship is not just deals in Greece or in the United States.  For instance, Mytilineos and General Electric just signed an EPC deal for a power plant in Libya that will help that country reduce power shortages and modernize a critical sector of infrastructure.  This illustrates how Greek and American companies together can drive growth and achieve commercial successes in regions of strategic importance.  And I can assure you that this economic partnership, based on a commitment to innovation and promoting entrepreneurship, will be the heart of our presence at TIF.

I can’t underscore enough the tremendous potential I see in this country with its strong human capital and resilient business community.  I am always impressed by Greek innovation and entrepreneurship, like the young start-ups from Patras University and Aristotle University in Thessaloniki that I met at TIF a few weeks ago.

I’m also really pleased that two of my favorite restaurants – Thessaloniki-based ERGON and Athens-based Yolenis –- will join Tuvunu in the U.S. market where they will open soon in New York and Rhode Island.  I am confident there will be many more success stories of Greek companies taking Greece’s healthy and sustainable food to U.S. markets.

I’ve made it a priority for the U.S. Embassy to support these partnerships, and we’ve done a lot to bring together Greek and American entrepreneurs in many sectors of the economy, whether food and tourism, or tech startups and the digital world.

Over the past year the Embassy has worked with local and diaspora entrepreneurship groups like the MIT Enterprise Forum, Mindspace, Foundation, Entrepreneurs Organization of Greece, Panorama of Entrepreneurship, Endeavor Greece and many others, to bring U.S. expertise on entrepreneurship to Greek students and startups.

I also want to highlight our support for the work that the Athens Partnership is doing on entrepreneurship, facilitating public-private partnerships through Bloomberg Associates in the U.S.

And of course the Hellenic Initiative has been a key partner on many other entrepreneurship programs and its relationship with the American diaspora community is a key element of Greece’s economic recovery.

But, as always, there’s more to do.  On a previous trip to northern Greece, I met with a group of entrepreneurs that have started businesses ranging from entertainment apps to community bike share programs.  Several expressed their desire to continue working in Greece but admitted that government bureaucracy, constant changes in taxation, and lack of financing don’t make it easy.

Last time Tom and I talked over lunch we discussed Greece’s potential to replicate some of Israel’s successes.  Many Israeli technology companies have their customer-facing operations in the United States and their back office in Tel Aviv and can really increase their scale by doing so.  It’s a model that I think could work here as well.

I believe that entrepreneurship-driven growth can be realized fairly quickly, provided that the Greek government removes obstacles and the right incentives are put in place.

Government support for entrepreneurs and startups can include financing and tax breaks, of course, but perhaps more important is for the bureaucracy and the administration to embrace and foster innovative ideas.  To recognize that invention and investment are the twin drivers of economic growth.

It’s never easy for any society, including my own, to see long-standing business models threatened by new technology.  However, the world and global markets constantly change and it’s the innovators, the dynamic new entrepreneurs that are defining them, and they are the ones Greek laws need to help.  And, as Alexis Papahelas pointed out in a thoughtful essay last weekend, we all need to be better listeners.

I always say that the U.S. government’s top priority here is to support economic recovery in Greece, an important ally and strategic partner in NATO, Europe and the Eastern Mediterranean.  A big part of that effort is finding ways to improve the investment and business climate and remove investment road blocks.

I also see working with entrepreneurs and the innovative start-ups already here in Greece, and encouraging many more by supporting U.S. investment and more U.S.-Greece economic cooperation, as crucial to this effort.  For my part, I will continue working toward this goal from now to TIF2018 and beyond.

In fact, this December I will be heading to the U.S. again with Minister Papadimitriou, Minister Pappas, Minister Kountoura and many others for the Capital Link Forum in New York to get the word out on opportunities here to build trade and investment ties.

So, I am very much looking forward to hearing from our other panelists and diving into today’s discussion which touches on some of my favorite themes.