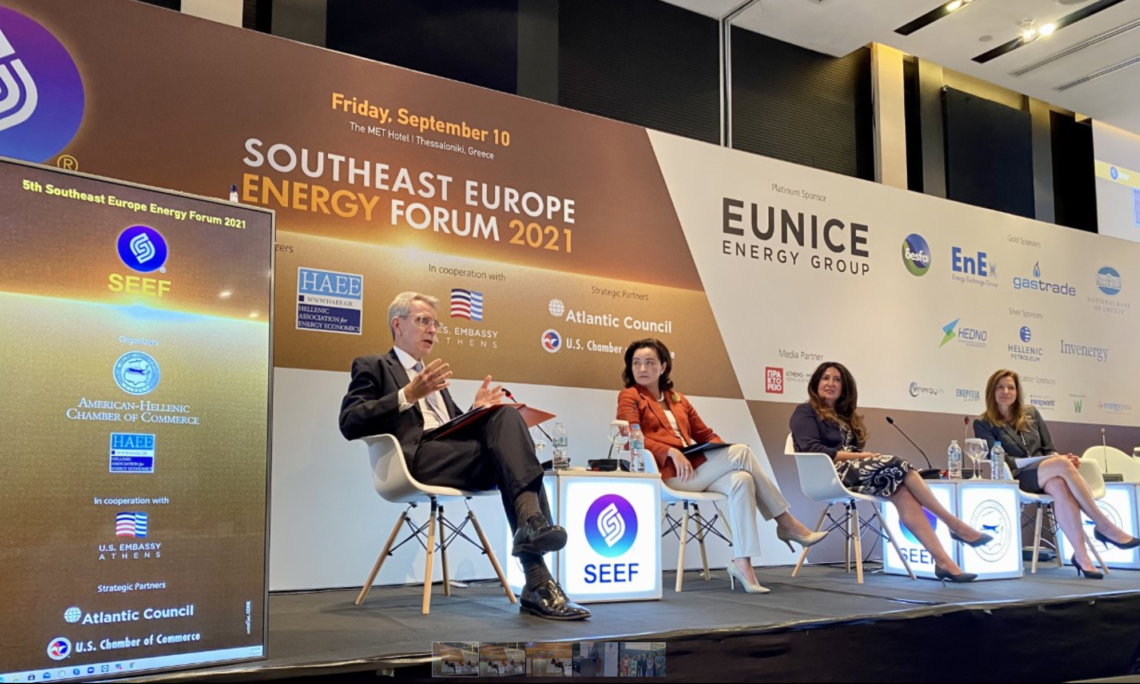 I can be relatively brief, and let me just start by saying first of all, huge congratulations both to the Atlantic Council but also to our partners in AmCham – Niko,  Alex and everybody else – for what this regional forum has become.  This is my fifth AmCham Energy Conference.  Nobody is more surprised than me that I’m here on the stage speaking again.  But one advantage of having done this for half a decade now is I have been able to watch first of all how the sophistication of this conversation has advanced, but also the extraordinary transformation that Greece is helping to effect in the energy market of Southeastern Europe.

I think it’s especially appropriate that we’re having this discussion today on the day that Gazprom has announced the completion of the Nord Stream 2 Pipeline.  I would make the point in the context of the very bad deal that Nord Stream 2 represents, that there are very few if any EU member states that have done more than Greece has done over the past couple of years to advance the longstanding American and European goal of diversifying energy sources and routes in Europe and building European energy security.

I would emphasize that this has been a bipartisan U.S. agenda item.  The first AmCham energy conference that I attended was in Alexandroupoli.  I was joined there by my friend and colleague Amos Hochstein.  Amos is now back in government as the Biden Administration’s Envoy for European Energy Security and I’m delighted that somewhere out in the audience here I think I saw Frank Fannon who was the previous Assistant Secretary for ENR and was an indispensable partner in everything that we’ve accomplished with Greece on these issues.

If you look at all of the innovations that have come online — the expansion of the Revithousa Terminal near Athens, which has allowed for large U.S. LNG cargoes to be delivered, the United States last year accounted for about 50 percent of Greece’s LNG imports, the completion of the TAP Pipeline.

I still remember my first Istanbul Atlantic Council Energy Conference where I was questioned whether this TAP thing was ever really going to happen because it just seemed like a figment of the imagination.  I see Maria in the audience here, and I think everybody should be enormously proud of what the TAP partners, including Albania, Greece, Italy, have accomplished, but what that represents, as the first new large energy infrastructure completed in Europe specifically to bring non-Russian gas to market.  That is now happening.

At the same time, we have the progress that’s happened on the FSRU in Alexandroupoli, the critically important progress on the IGB pipeline.  I look forward to hearing a little bit more from Ambassador Mustafa about why we all need to be so invested in the success of that undertaking.

The real progress that’s taking place between Greece and North Macedonia, and arguably, there has been no area that has seen a more dramatic transformation of Greek foreign policy during my tenure as Ambassador than the relationship between Greece and the Western Balkans, which has really been unlocked by the Prespes Agreement and by the very strong commitment that now two Greek governments have demonstrated to recasting and deepening, especially the economic and energy security and investment relationship between Greece and North Macedonia.  I think we all should be very proud of that.

I’ll make just a couple of other points to wind up.  First of all, I should have said at the beginning, I’m incredibly proud of our all-star team out here, and especially these three Ambassadors who are with me here today.  I’m delighted that they were all able to join us.

I was also really pleased that we were able to spend about an hour with Energy Minister Skrekas today.  It was very impressive for me to hear in the conversation between Minister Skrekas and our diplomatic team across the region the convergence that exists, but also the Greek government’s recognition that its agenda now is not just a national agenda, it’s a regional agenda.  It’s connected both to the energy security and also the energy issues that I talked about, but also the critically important energy transformation that we’re all engaged in.  The new projects coming online like the Mytilineos gas turbine in Agios Nikolaos.  Like the new super-efficient General Electric turbine that will be coming online in Alexandroupoli in connection with the FSRU.  The White Dragon project in Western Macedonia, a critically important technology demonstrator in which an American company, Advent Energy, plays a central role, is now moving ahead.

Greece’s own spectacular potential in areas of renewables – wind and solar.  I was very excited to see the data for Monday and Tuesday when Greece generated more of its electricity through wind power and renewables than any other country in the European Union.  We’re in the midst of, the meltemi is still going, and that demonstrates both the capacity that Greece has to scale up its wind power production, but also the importance of building networks and building resiliency among different energy sources, and that’s a lot of what we were discussing with Minister Skrekas.

It’s a very exciting time.  We’ve got a lot of work ahead of us.  The climate issue looms so large here in Greece.  All of us who lived through the fires last month in Evia and Athens and Ancient Olympia, three regions that I know well, where I’ve ridden my bicycle, and it’s heartbreaking to see what happened to those three regions as a consequence of the global climate crisis that we confront.

But Prime Minister Mitsotakis is demonstrating what has to be done.  The commitment to phase out lignite by 2025, the commitment to build a regulatory framework that attracts the best of international technology and investment, a lot of which is coming from the United States.  I’m very excited about the fact that one of the four bidders for HEDNO, the Greek electricity distributor, is KKR of the United States.  They have made a very serious bid which I hope will be successful because they have both the very deep pockets, but also the technical expertise to scale up HEDNO in the way that’s going to be necessary as Greece uses electricity, as more and more clean electricity is increasingly the driver of this economy.

So there’s a lot going on in this space.  Ben, I’m very grateful for the partnership with Atlantic Council.  I think it’s really important that we keep doing what we’ve been doing together in terms of both sustaining the transatlantic conversation on these issues but also helping to lift up in Washington and elsewhere the really pathbreaking work that’s being done by the Greek government and the stake that both of us have in each other’s success.

We’re very excited that we’ll have Foreign Minister Dendias in Washington next month for the third round of the U.S.-Greece Strategic Dialogue.  Energy and climate has been one of the pillars o that dialogue from the beginning, as Yuri and Kate will remember well.  And I am very confident that as our bosses sit down next month to take stock and try to look ahead, they will be enthusiastic about both the progress that we’ve achieved and also all that we’ll be able to do in the future.