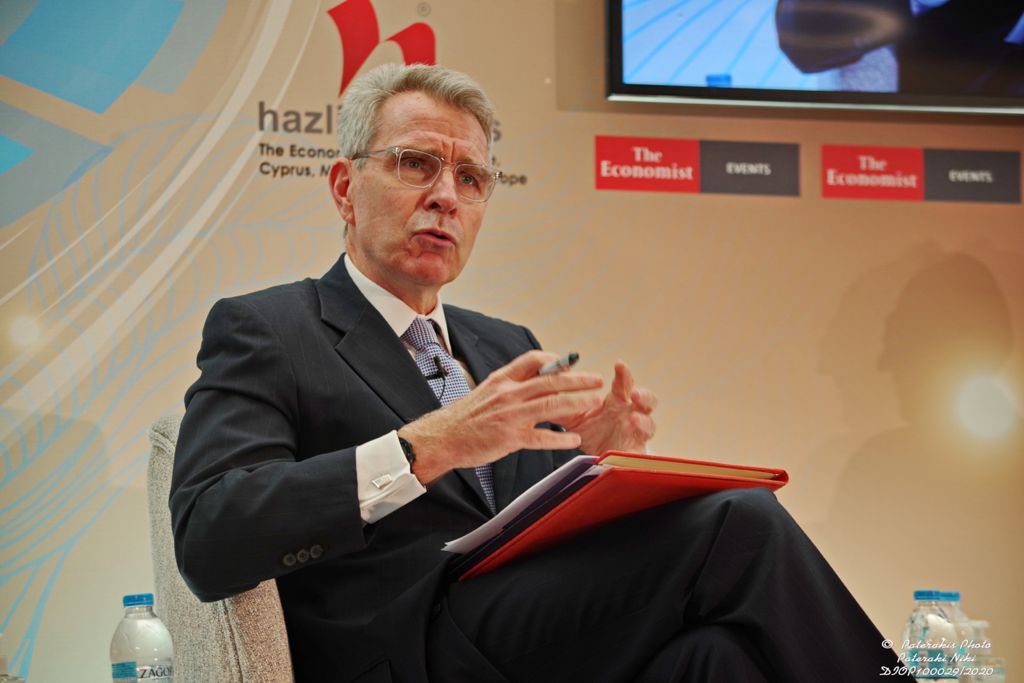 Thank you very much for having me.  Congratulations to The Economist for putting on this forum up here in Thessaloniki, a city that in many ways has felt like my second home throughout my five years as American Ambassador here.

It’s a huge honor to be on the same stage as Minister Skrekas.  The Minister and I are just coming from a meeting with my three American ambassadorial colleagues in the region – the U.S. Ambassador to Bulgaria, North Macedonia, and Albania.  I was delighted we were able to make that happen.  I’m especially pleased that I have my colleagues here in Thessaloniki today because it really highlights something that has been a guiding principle for U.S. engagement in Northern Greece since 2018 when we tried to put the ingredients together for the U.S. status as Honored Country at the Thessaloniki International Fair.  That is, to look at Thessaloniki and Northern Greece in a wider regional context and to view this not just as the second city of the Hellenic Republic, but as the gateway to a market of 30 million people.

I’m incredibly proud of how much progress we have made since the Thessaloniki Fair in 2018 in building out that regional vision.  Again, Minister Skrekas and the responsibilities that he has in the areas of environment and energy are absolutely at the center of that.

I’ll talk about the energy issues a little more later this afternoon at another event, but I’m really glad to be able to focus now on the environmental aspects.  I’m especially glad to do so with Panagiotis.  Envipco was one of the anchor U.S. participants in the American AmCham Pavilion at the Thessaloniki Fair in 2018.  In fact, if I’m remembering, Panagiotis, that is where you launched your brand partnership with Giannis Antetokounmpo long before Giannis was the biggest player in the NBA and a name that was known throughout the United States.

I was very proud earlier this week to host Connecticut Senator Chris Murphy in Athens and at Souda Bay, and Connecticut is the home state of Envipco.  So everything is really coming together here.

I would emphasize, all of us who have lived in Greece and experienced both the extraordinary beauties that this country offers but also the traumas of the past few months, the horrific fires in Athens,on Evia and Ancient Olympia, understand that we are all getting a flashing red light from the environment and the behaviors have to change.

American companies are going to play a leading role working with Greece and working here in Northern Greece to leverage the wider region to address these goals.  Envipco is a great example.  We’ve got companies like Blink Charging in the electric vehicle space.  There’s a lot more happening in Northern Greece in these areas than people often understand.  You’ve got all of the energy projects – the Alexandroupoli FSRU, the connections with Bulgaria, the IGB which are so important.  You’ve got a big batteries company called Sunlight which is headquartered in Eastern Macedonia which plays an important role as a developer of battery and electricity storage technologies.

Western Macedonia is going to be central to the White Dragon project that Minister Skrekas’ ministry has driven forward.  I’m very proud that an American company, Advent Technologies, headquartered in Patras, a leader on hydrogen fuel cell technology, is a participant in that White Dragon project.

So we see that this is an area that plays to both the very ambitious climate agenda that Prime Minister Mitsotakis has set out.  And I want to underline just how important it is to the United States government that Prime Minister Mitsotakis has set the bar so high for phasing out lignite and working jointly to protect the environment, but also how enthusiastic American companies with their world leading technology are about participating in this process, participating in this process in Northern Greece and leveraging the foothold here in Northern Greece to get into other markets like Bulgaria, like North Macedonia, like Serbia, like Albania.

The last point I will make on the clean tech side, we were talking with the Minister earlier about the critical role that gas will play as a transition fuel as part of this process.  I’m very proud that American companies, and in particular General Electric with its super-efficient gas turbines, are a big part of this story.  You have a state of the art turbine that’s being installed in Agios Nikolaos in the Mytilineos plant there.  And I have told Mr. Copelouzos that I’m not going to sleep until we’ve signed the contract also for the Copelouzos power plant in Alexandroupoli linked to the FSRU which also will be GE clean tech technology.

So we see fantastic opportunities here.  We’ve seen a real transformation in the reputation of Thessaloniki as a home for American technology companies.  I was driving past the new Cisco Center this morning.  We’ve got the fantastic example of the Pfizer High Technology Center which has grown beyond all expectations here in Greece.

There’s a lot happening, but there’s even more that’s going to happen in the future.

Moderator:  [On climate change] You were talking about quite long-term things that you’ve been working on for some time in the past and that imply an involvement and commitment sometime in the future.  Do you have any concerns about the continuity of commitment from the U.S. to the region?

Ambassador Pyatt:  Not at all.  Even during the period that the United States was out of the Paris Agreement, our companies continued to innovate.  We continued to reduce our carbon output.

I’m from California which has two important roles.  One, it’s a state like Greece with a strong grassroots focus on the quality of the environment.  It’s also a state, because it is the fifth or sixth largest economy in the world which actually has the ability to set the standards on its own in our federal system, which then ripple out across the United States and across the rest of the world.  California has moved very aggressively on energy transition, very aggressively on deployment of wind power and solar, and frankly, is a perfect match for Greece because we have a very similar geography, we have a very similar climate, and we also face the same imperative to protect our climate.

For me, it was so poignant that at exactly the moment that I was looking through the smoke-filled skies of Athens, I was also reading the stories from home in California where we have literally the largest fires that my home state has ever confronted, driven by exactly the same extreme weather events which are a consequence of manmade climate change.

Moderator:  Thank you.  It is extraordinary, isn’t it, that the world, the climate and the globe, the planet we live on, seems to be doing its very best to underline the messages it’s been sending us?

Ambassador Pyatt:  It’s a flashing red light.  And as I read, a colleague at the New York Times, captured it very well when he wrote that Evia was the world capital of the consequences of climate change for our lives and the world we live in.  It was the quintessential example of how urgent it is that we think differently about these issues.

Again, I cannot overstate how important the standard that Prime Minister Mitsotakis has set is a model to many other countries in Europe which are moving slower on lignite phaseout, and also in terms of something Minister Skrekas works on every single day, building the regulatory and market environment that incentivizes companies to innovate and bring new technology.

As I said, you only have to look at the examples of Mytilineos or Sunlight to see how Greek companies are waking up to this opportunity and are developing their own technological expertise.  Advent, which is headquartered in Boston, Greek headquarters in Patras, expanding into Athens, is a perfect example of that synergy between our two economies.