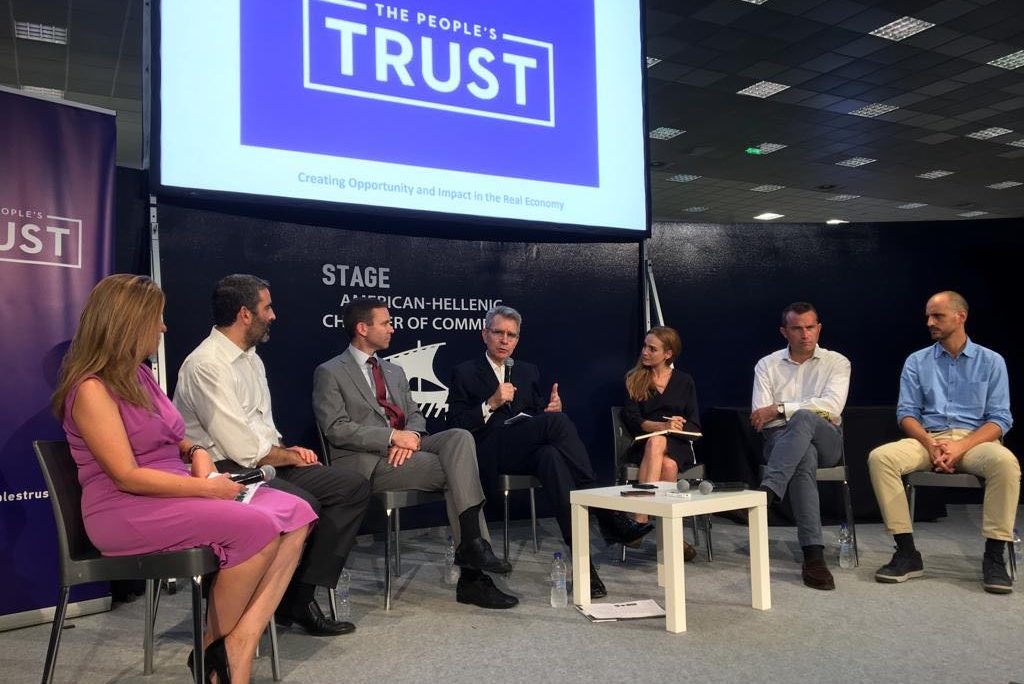 Ambassador Pyatt: First of all, thank you for having me here today. It’s a special pleasure for me to be here with all of The People’s Trust team. We’ve had a longstanding partnership. I know you were part of the Entrepreneurship Summit in India last November which was terrific.

I just want to make a couple of points.

First, to underline for the United States government our strong commitment to doing everything we can to help see that Greece emerges successfully from the economic crisis. America has a strategic interest in Greece’s economic success. And I am absolutely convinced that one of the drivers of that economic success has to be the  [inaudible] enterprises that groups like Paul’s are helping to support.

Like Paul, I’m incredibly excited about what’s across the road from us with the Startup Pavilion. I went there again this morning when I had half an hour, and there’s so much energy, there’s so much positivity. It’s what makes me optimistic about Greece’s future. But what you see here at the American Pavilion is a very deliberate focus on the best of American technology and entrepreneurship, and looking around the pavilion, whether it’s Facebook or Google or Cisco or Microsoft or Oracle or IBM, what you see is American companies that are strongly committed to their presence here in Greece, and that’s a big part of the message of this pavilion. But also companies that are eager to partner with and to work with Greek entrepreneurs, to grow opportunity, to grow the economy.

As Paul noted, the embassy has done a lot of work in this area, working with groups like The People’s Trust, [Inaudible] Foundation. We’ve had our Tech Olympus Summit in Thessaloniki this week. Every time I go by our pop-up incubator here in the American Pavilion it’s full of energy, it’s full of people looking for ideas and looking for opportunities.

We’re going to continue doing that. We’re going to continue building bridges with projects like our annual delegation supported by our Hellenic Initiative, South by Southwest. And I am absolutely convinced and reconvinced after spending a few hours at Pavilion 12 this week, that this is the right place to focus on. That’s what’s going to grow Greece out of the crisis. That’s what’s going to help to attract brain drain back into Greece, something that is a major focus of the political leadership. And I have seen enough success stories, and we were just with a team, prior to my talk, I was able to meet earlier with some of the folks in Pavilion 12 who were recognized for their startups. There’s a lot more happening in this sector than most people know. It’s one of Greece’s great untold success stories.

I’m going to use what modest powers I have as Ambassador to try to lift that up.

So thank you very much for having me with you. Paul, I understand you’re going to have an office up here in Thessaloniki now, which is fantastic. We’ve got our fantastic new Consul General Greg Pfleger and a consulate team engaged on these issues in Northern Greece as well.

I’m going to keep working on this. I’ll be back in Thessaloniki for the summit in November. I’m sure we’ll talk more about it then.