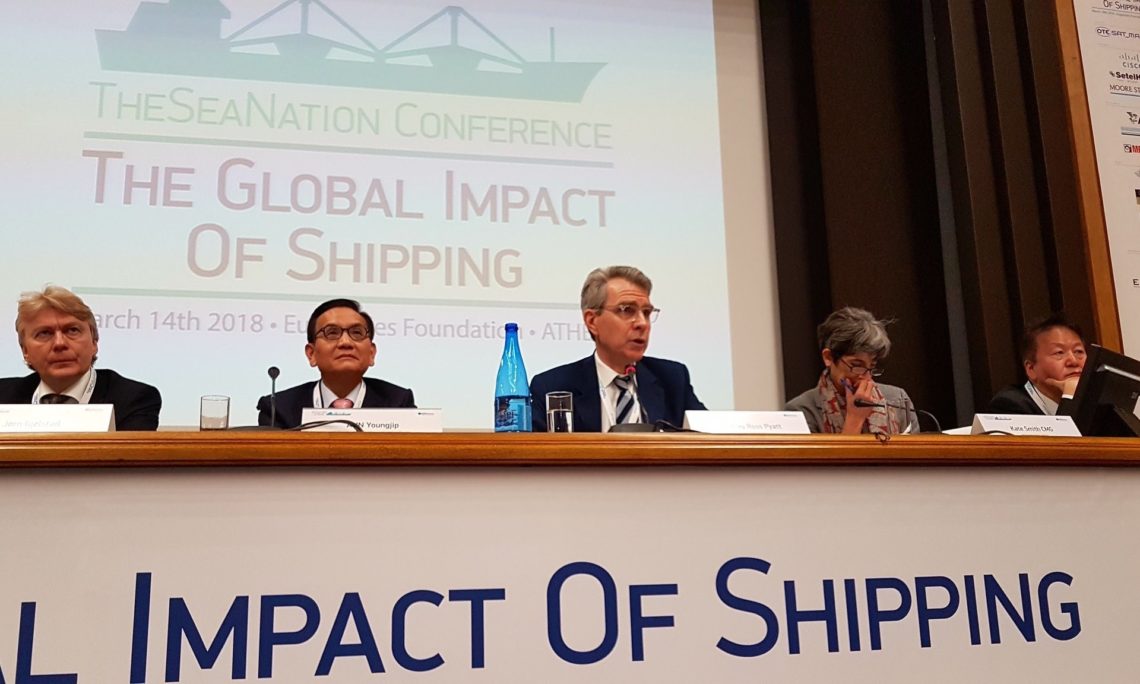 Καλημέρα σας.  Thank you Leonidas.  First of all let me say what a genuine pleasure it is to be here at the Eugenides Foundation.  The U.S. Embassy has a special partnership with the Eugenides Foundation because this building houses our flagship American Corner in Greece, the UTech Lab, which is a facility downstairs aimed at helping to educate and empower Greek young people in the use of technology. And as a great believer in the power of technological transformation, I’m very, very committed to our partnership with the UTech Lab, and I would encourage everyone to check it out on their way out because it is a wonderful facility that gets a lot of inspiring stories about Greek young people learning how technology is changing the world that we live in.

It’s also great to see so many friends from the shipping community, the Greek government, and the diplomatic corps here.  I want to offer a special acknowledgement to Nea Dimokratia Vice President Hatzidakis, especially because we have Mr. Mitsotakis in Washington today, in the middle of a very successful visit.  He will be at the State Department later today and very glad that that’s happening, so thank you folks.  I am also honored be on this panel with such a distinguished group of my fellow ambassadors.

Over my year and half in Greece I’ve been really amazed by the success story that is Greek shipping.

The size and global impact of the Greek shipping industry is a tremendous accomplishment, for which the Greek people are justifiably proud.

Today, your community symbolizes the great potential and resilience of the Greek people.    The work you do helps to keep the world economy open, dynamic, and free, just as the strength and resolve of the Greek people and the Greek state help bring peace and prosperity to Greece’s neighborhood.

I look forward to seeing even stronger cooperation between Greece and the United States in the coming months, and am confident that 2018 is on course to be a groundbreaking year for our bilateral relationship.
This includes continued cooperation between our two governments, like we’ve seen in dozens of bilateral engagements during the past few months, including the Prime Minister’s successful trip to the United States last fall and the recent visits of high-level U.S. Congressional delegations here in Greece.

The State Department’s Assistant Secretary for European Affairs, Wess Mitchell, will arrive in Athens later today for his first visit, where I am sure he will express his gratitude to his Greek counterparts for this country’s unique role as a leader and a pillar of stability in the region.

Minister of Merchant Marine, Transport and Island Policy Kouroumblis will be travelling to the United States tonight, and I was glad to be able to wish him a καλό ταξίδι this morning, and as noted in his remarks, among other things he will sign a Memorandum of Understanding between the State University of New York Maritime College and the Maritime Academy of Hydra.  This agreement, the first of its kind for the United States and Greece, will allow for greater academic exchanges between mariners from our two countries.

Minister Kouroumblis will also sign an agreement with the U.S. Coast Guard to allow mutual recognition of Greek and American seafarers’ certificates, which will result in American seaman being able to receive essential maritime training aboard Greek-flagged vessels. He will travel also to New York City, to Washington, DC, and he will join the Mayor of Messolonghi to celebrate Greek Independence Day with the diaspora community in Florida.

And speaking of the diaspora, I should point out the people-to-people relationships between Greece and the United States, including and in particular those between our shipping and maritime communities, are one of the strongest components of our bilateral ties, and I particularly want to salute in this regard Propeller Club President Xiradakis, or whatever your title is, George, and your role as champions of the bilateral relationship between our two countries.

Our economic ties are also gaining strength.  The United States hopes to see enhanced bilateral investment cooperation between our countries, including an overall strategy where Greece serves as a regional hub and supplies energy from diverse sources to Europe, spurred by increased U.S. investment in this critical sector, as well as U.S. investment in Greek shipping, ports, and shipyards.

And American companies are finding opportunities here.  I traveled to Syros last year and saw firsthand the potential of that historic shipyard, which ONEX is now working to unlock and further develop.  I look forward to returning to Syros later this year for the re-opening of the shipyard under new U.S.-based ownership.  I also hope that U.S. companies will have the opportunity to invest in the Alexandroupolis port.  The strategic position of this port was on full display last year, when elements of the U.S. Army’s 10th Combat Air Brigade used it as a staging area for helicopters and cargo returning back to the U.S. from Romania.  Last week the Deputy Commander of the U.S. Army’s 21st Theater Sustainment Command, Brigadier General Maiocco was in Greece to visit and to see firsthand the potential to develop this strategic infrastructure of Alexandroupoli. And I am confident we will see strong American investor interest in the Alexandroupoli port and related FSRU.

In conclusion, I want to reiterate how proud I am to say that the friendship between Greece and the United States has never been stronger. We have reached a very special moment in our bilateral relationship, and we want to continue to build on this momentum.

You all are aware that the United States will be honored country at this year’s Thessaloniki International Fair.  President Trump called it an opportunity for us to highlight, on the world stage, American entrepreneurship, innovation and enterprise, and he promised to send a high-level U.S. delegation to represent us at that fair.  But the fair will also help to spotlight Greece’s economic recovery and give us the opportunity to highlight our strong bilateral relationship in all of the areas I’ve mentioned today — economic, defense, security, and people to people.

Our Embassy team, in cooperation with the American-Hellenic Chamber of Commerce, is already working on a series of events built around our year at TIF, especially up in northern Greece, and to ensure the participation of the highest level business delegations.  I encourage you all to plan on attending some of these events and, of course, the fair itself in Thessaloniki.  And I know I’ll see all of you at the U.S. pavilion this year at Posidonia.

Greece and the United States will continue to profit from strengthening ties between our people, businesses, and governments, which will also benefit Europe and the wider Mediterranean and Balkan regions.  As President Trump told Prime Minister Tsipras at the White House Rose Garden: “America’s friendship with the Greek people has been long and enduring.”  Our maritime ties are one of the highlights of that friendship, and

I look forward to continuing along that path in the year ahead, and I hope to see you all in Thessaloniki.  Ευχαριστώ πολύ.