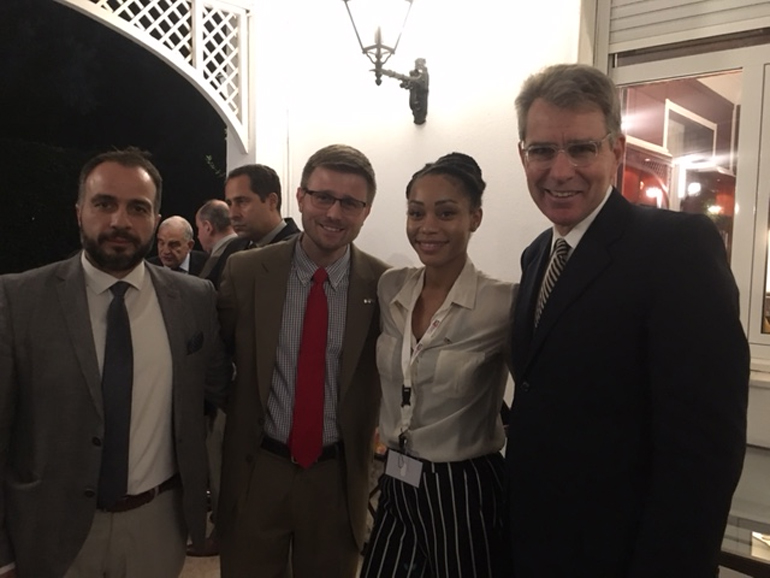 I want to begin these remarks this evening first of all by thanking the whole team that put this event together: first of all, Keith Silver and the very hard working team in our Foreign Commercial Service office at the Embassy, but also our partners at the American – Hellenic Chamber of Commerce, which is – as I say all the time – by far the most important force multiplier that the U.S. Embassy has here in Greece, so thank you to all the leadership, our friends from the American-Hellenic Chamber.

Trade Winds is the largest annual U.S. Government-led trade mission, connecting U.S. companies and organizations to business and government leaders in some of the world’s most promising markets. In nine international Trade Winds events, the U.S. Commercial Service team has facilitated more than $240 million in export sales for U.S. companies.

This evening is the culmination of a week-long Trade Winds focus on Southeast Europe with Greece as the final stop on a mission that brought dozens of U.S. companies to Bulgaria, Serbia, Romania and Croatia as well as Athens. And it makes a lot of sense that Greece is the final stop on this delegation, considering the Hellenic Republic’s importance as a regional hub and increasingly as an important leader in energy, defense, logistics, shipping, and many other areas.

So, tonight we are welcoming here to Greece and to the Residence 13 U.S. companies. They’re here to explore new opportunities for business cooperation. I’ve met all of them as they came in, and they represent a variety of industries, including water treatment, industrial equipment, engineering services, mining equipment, oil and gas, marine technology and aerospace and defense. They hail from locations across the United States, from my native San Diego to Houston to Philadelphia and probably everything in between.

This trade mission comes at a particularly auspicious time for Greece, of course, just a few days after Prime Minister Tsipras’ extraordinarily successful visit to Chicago and Washington, D.C. And I know some of our Greek guests who are here this evening were with me at the Thessaloniki Summit, which shockingly was just two weeks ago but, for me, two transatlantic trips ago and what seems like a very long time in U.S.-Greek relations.

I said to the Embassy team this morning that I have rarely seen a senior visit move the needle the way Prime Minister Tsipras’ visit to Washington last week did. In addition to spending time with President Trump, Vice President Pence, Secretary of Commerce Ross, Secretary of State Tillerson, and many others in the Administration, Prime Minister Tsipras was also able to have multiple dialogues with business people in Chicago, Washington, and with a whole bunch of representatives from New York as well, who came down just to meet with him.

In those meetings, the Prime Minister made clear the priority he is now placing on building trade and investment ties with the United States and Greece’s special affinity for the transparency and openness that are signature characteristics of American business. U.S. companies are reliable partners bringing innovation and advanced technologies to Greece. They adhere to a high level of business standards and ethics that are not the usual among some international businesses seeking to invest here in Southeastern Europe.

One of the prominent topics of conversation between President Trump and Prime Minister Tsipras, of course, was the United States’ role as the honored country at next year’s Thessaloniki International Fair, and it is important to note how the Prime Minister highlighted the 2018 TIF as a strategic choice by the Greek government to put a bright spotlight on the commercial and trade relationship with the United States.

We intend to make TIF 2018 a cornerstone of our bilateral relationship for the next year, taking advantage of TIF’s status as the most significant regional trade event attracting attention and visitors from throughout Southeastern Europe. So, as we’ve done with Trade Winds, the U.S. Commercial Service along with just about everyone else in our Embassy is going to work with the American-Hellenic Chamber, and this time focused on pulling together a spectacular and memorable American pavilion at TIF 2018.

The highlight of the U.S. pavilion will be American innovation, advanced manufacturing, technology, digital innovation, and entrepreneurship, and I encourage all the companies that are present tonight to speak with the Embassy team and with our partners from AmCham about how to be a part of this exciting initiative.

It’s indicative of how important occasions like this one are that, I’m told, over 85 business meetings were held today with potential Greek partners, and I had a chance to see some of this commercial speed dating underway when I visited the Hilton earlier this afternoon.  I’m confident from what I’ve heard from people this evening that many of these discussions will lead to increased business between our two countries, and I want everybody here to know that this is a goal which has the strongest possible support of our entire Embassy team.

Of course, the networking is not over, so I’m going to stop talking, and I’m going to encourage you all to continue to meet, exchange cards and keep building relationships — enjoy the food, and go inside if you get too wet out here — and again, keep us posted because we are committed to working very hard to build the full potential that we see in the U.S.-Greek trade and investment relationship that I’m part of.  Thank you very much, ευχαριστώ πολύ.