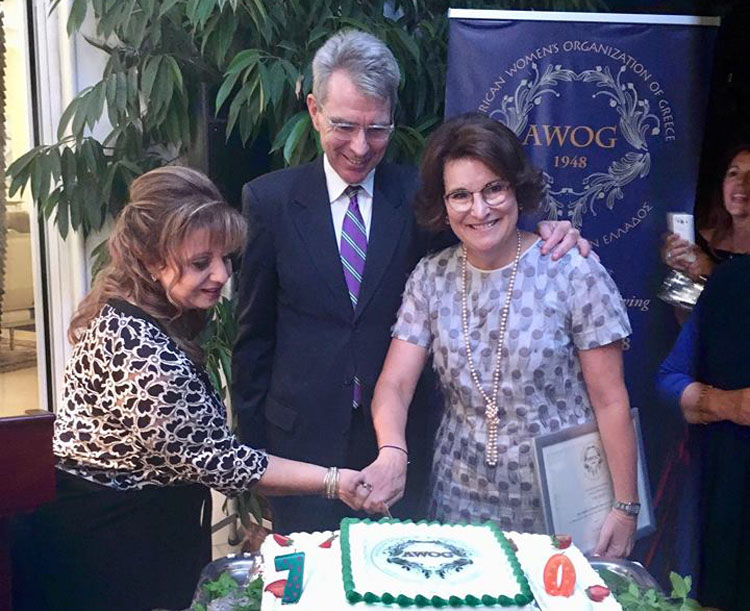 Thank you to Bessy or whoever it was who arranged this beautiful weather tonight.  This really is the best of the Athens summer.

I am in denial about the end of the summer, in part because a lot of us at the embassy spent most of August working on our big event in Thessaloniki.  So it’s nice to be able to stretch it out a little bit.

And then, of course, we pulled together everything that’s good about the U.S.-Greece alliance in Thessaloniki last week for the Thessaloniki International Fair, which I really believe will be remembered as a landmark of the U.S.-Greece relationship and the broad range of areas where our countries work together.  From business to defense to people-to-people ties.

So it’s very appropriate that we’re celebrating tonight the 70th Anniversary of the American Women’s Organization.

So I want to start by congratulating in the most sincere way possible Bessy as President, the real President; and all the Board members who did the work for this evening.

We’re very proud at the embassy to recognize the many contributions that AWOG makes.  You’ve provided crucial support to Greek and American communities here in Athens for seven decades, which is longer than I’ve been alive, I’m glad to say.  As one of the oldest women’s organizations in Greece, AWOG has helped newcomers adjust to life in their new homes here, through events like tours, lectures, cultural and social events.  But as Bessy alluded to, and I think this is what I most respect, is AWOG’s tradition of giving back to the community.  Your participation in programs like the Susan G. Komen Race for the Cure reflects the very best of the American tradition of service and giving back.  Your work with groups like PIKPA, with Caritas and others have provided essential help to Greek families in need.  And of course, events like your Christmas Bazaar raise funds for important organizations like Ark of the World.

And I would say personally, I had the opportunity and the honor of meeting Father Antonios last year in Chios at the Shelter for Unaccompanied Refugee Children that Ark of the World established when the refugee crisis, migration crisis began.  So I have a special appreciation for the many contributions that AWOG makes.

So I really salute you for the work that you are doing to deepen those ties.

As we all celebrate your 70th Anniversary, cut this beautiful cake, and I will tell you when I saw the cook working on this this morning I said that’s a lot of cake.  But now that I see how many people there are, you might actually finish this.

But I want to wish you all continued success in your important work, and I’m very confident that AWOG is going to continue contributing in the months and decades to come, and I want to thank you all for joining us this evening,.

I know there are a lot of you who have been in this residence before.  One addition that Mary and I have made is this beautiful sculpture by Kostas Varotsos that you see in the garden.  And I know some people were looking at our art collection inside as well.  And I know Monica and our public affairs team will be very happy if you take with you the catalogs that are sitting out in the living room that describes some of the art and what we’ve accomplished with hit.