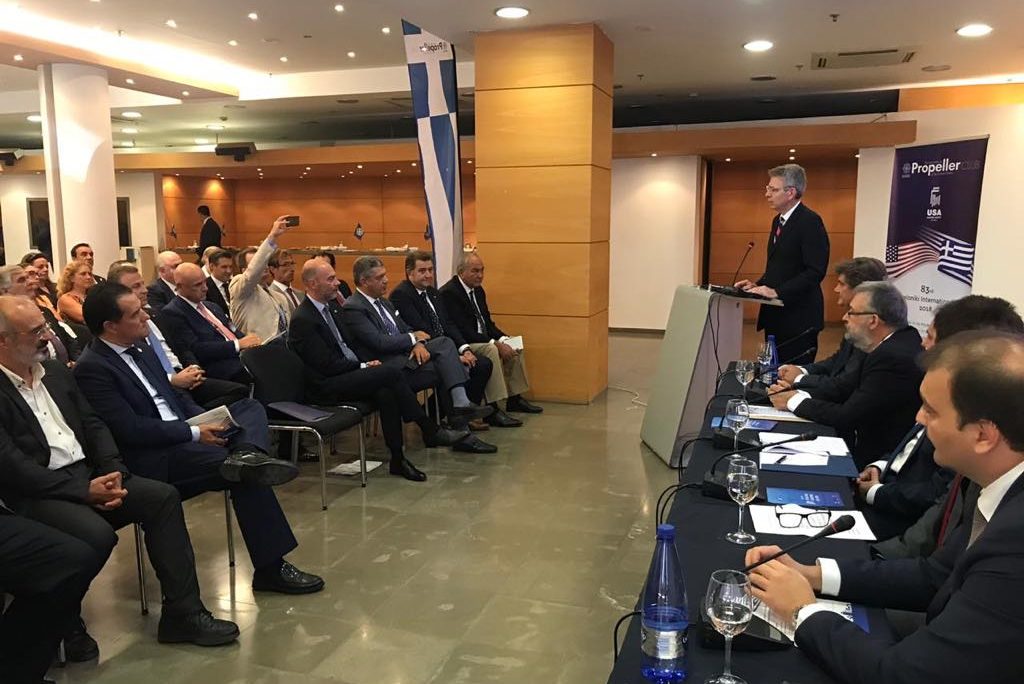 Thank you for Simos, friends, my friend We’re honored to have the Vice President with us today.

I’m delighted to be here. I’m especially delighted because this is happening in the context of the U.S. year as Honored Country at the Thessaloniki International Fair.

This has been a landmark, an incredible, incredible week for the U.S.-Greece relationship. I think all of you have felt the energy level, the opportunities that have been created. I’ve said it many times this week but I’ll do it again, to acknowledge the fantastic work that Simos and the American-Hellenic Chamber of Commerce has accomplished in helping to make clear that the Americans are back. That we are committed to our presence in Greece. We are committed to doing everything that we possibly can to help accelerate, sustain Greece’s process of economic recovery.

We’re doing so with a very strong focus on innovation, on creativity, on entrepreneurship, but also with a very long history of the Greece partnership and alliance.

I have been a supporter of the Propeller Club from my first days here two years ago, precisely because Propeller is such an important dimension of the U.S.-Greece people to people relationship. I’ve become an annual visitor to Andros and Syros and Chios. I’m very careful about picking favorites. [Laughter]. But one thing that’s been clear to me in those visits has been the passionate commitment of the Greek maritime community to build ties with the United States. Your traditional service, and your record of helping to be a stabilizer and accelerant of the U.S.-Greece relationship.

So I’m absolutely delighted that just like we say the Americans are back, with Propeller, it’s back here in Thessaloniki. And I know that Greg and the consulate team are going to enjoy the same kind of close partnership here in the North that all of us have every day in Athens.

A few days ago many of us were able to be on board the USS Mount Whitney sitting in the Port of Thessaloniki. I can imagine no better symbol of our commitment to engagement with Thessaloniki and to our security alliance than to have the command ship of the 6th Fleet here in Thessaloniki. And I don’t need to tell anybody in this room how important Thessaloniki Harbor is to this region and to its future.

What I will share is the American view that improvements, performance, and operations at the Thessaloniki port and the commitment to transparency and management and implementation of industry best practices will be critical to our shared commitment to unlock the full potential of Northern Greece as a regional hub.

I’ve been very impressed over the past week to see how Thessaloniki today is poised for a transformation. The metro soon will be operating. The Prespes Agreement unlocks the economic potential of the partnership between Thessaloniki and the Western Balkans. And there really is a prospect to [inaudible] projects like the TAP pipeline, and it really is a project for Northern Greece to become a regional logistic [inaudible] and economic hub.

With other privatizations on the horizon, including in particular Alexandroupolis in which the United States is closely engaged, the prospect of near-term progress on projects like the Alexandroupolis storage and re-gasification unit, the IGB Pipeline between Greece and Bulgaria. We and our partners, the Propeller Club, and in particular the Propeller Club of Thessaloniki have a lot to look forward to.

We have a little bit of work ahead of us, and Simos and I have agreed that we ought to take a few days off before we turn to the task of building on the fantastic momentum that we enjoy right now.

I want you to know, George, my commitment to supporting Propeller here in Thessaloniki and developing the same kind of productive partnership that [inaudible] itself for so long in Athens.

So congratulations. Synxaritiria, to the new chapter. And I very much look forward to seeing the results.