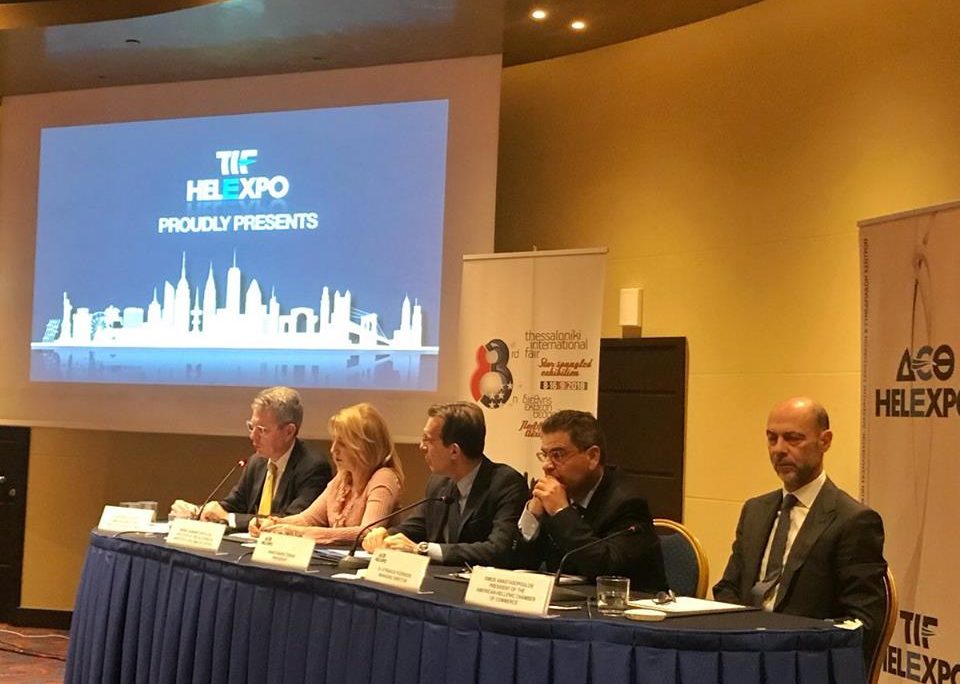 Thank you very much. Καλημέρα σας. I’m going to try to be brief and just highlight some of the key messages from the U.S. in terms of our important participation as the honored country.  Let me start by thanking Tasos and Kyriakos for making the drive down from Thessaloniki to be here today, and we are very proud of our partnership with the management team at HELEXPO, and of course our very important partnership with the Amcham, as we work to make the 2018 TIF a real landmark in terms of the U.S.-Greece relationship.

For our part, there are two strategic objectives behind our participation in TIF this year.  First, of course, is to celebrate the very best in American technology, American innovation, American entrepreneurship—the characteristics which, as Tasos said, mark the competitive and dynamic parts of the U.S. economy, but also to get the message out to get the message out to the international audience that Greece is back, that Greece is open for business, that the economy has started to turn around, that there are real opportunities here in terms of American and international investment.  There’s fantastic human capital, and a very strong political commitment from the United States Government to doing all we can to see that this process moves forward.  So, we are committed to making 2018 America’s year in Greece, and we want to ensure that this really is the year that Greece turns the page on the crisis period. President Trump with Prime Minister Tsipras last October emphasized the importance we place on the United States’ status as honored country, and he committed to sending a senior-level U.S. delegation, a Cabinet-level U.S. delegation to the TIF.  And we will be there in a very big political way but also with our companies and in a way that emphasizes, as Tasos said, the role of Thessaloniki not just as a key city in Greece but as a gateway to the wider region of the western Balkans and southeastern Europe.

I was in Ankara two weeks ago with all of my Ambassadorial counterparts from the neighborhood, and I can share that there was great excitement with the opportunities that TIF provides for building our wider economic agenda there, and I’m optimistic that we will see a strong presence from the Amchams and other representatives of your neighboring countries as well.  Doing so in a way that really spotlights our commitment as the U.S. Government to Europe, to southeastern Europe, and as the premier opportunity to demonstrate the deep commitment of my government to Greece.

It is certainly one of the most important political events of the year here in Greece. Prime Minister Tsipras has emphasized the importance that he places on the United States’ selection as honored country this year.  He did so in October when he was in Washington, he did so two weeks ago when we had one of the largest U.S. Congressional delegations that we’ve ever had here in Greece meeting with the Prime Minister for some very successful talks.  We are particularly grateful, and I should emphasize this, for the leadership that the Minister of Digital Policy, Minister Pappas, has taken in terms of pulling the Greek government together on these efforts, travelling to the United States together with Amcham, together with U.S. officials, to highlight the opportunity that TIF represents.  I was also encouraged when I met with Deputy Prime Minister Dragasakis in Delphi.  He clearly has TIF on his radar screen as well in the context of the new responsibilities he has with the Ministry of the Economy.

The United States sees Greece as a crucial pillar of stability in this region.  We value our relationship with Greece and we want to leverage TIF to illustrate the depth and breadth of our relationship.  We also want to highlight in particular our commitment to northern Greece, and we are very proud of our Consul General Rebecca Fong and her team there.  One of the things that TIF will produce is a lot more U.S. Embassy presence in northern Greece.  I’m very well on the way to setting a record for American Ambassadorial visits to Thessaloniki.  I think I’m probably on number eight at this point, and you will see me up there a couple more times before September.  We are truly committed to ensuring, as Governor Tzitzikostas put it to me, that the Americans are back and that the Americans are seen as positively engaged in northern Greece at this stage.

We have a very big team at the U.S. Embassy, many of whom are here today, who are working hard every single day with their Greek counterparts in order to prepare the foundation for our presence in September. We’re also very proud of the American private sector role.  Amcham, of course, and Simos will talk about that. It carries the spear, but we are also enthused by the level of engagement that we see from our premier companies.  I met with a number of them at the Delphi Forum this past weekend, and I heard strong commitments to their corporate level participation at TIF in the sectors of technology, pharma, sectors that are most important in the dynamic aspects of the knowledge-based U.S. economy.

The other thing we’re doing — and you’ll hear more about this in the weeks ahead — is trying to use TIF as the branding vehicle for much of the Embassy work this year.  So, for instance, we have very successful programs ongoing in the area of entrepreneurship and we’re trying to put all these under the TIF umbrella.  This week, for instance, we are collaborating with the Dutch Embassy and Orange Grove on two basic events focused on women’s entrepreneurship, where there will be an Orange Grove “Squeeze” that Caspar Veldkamp, the Dutch Ambassador to Greece, will be hosting on international women’s day, but then we are taking the American mentors who we are bringing to Athens for the Orange Grove “Squeeze” — we are taking them up to Thessaloniki.  So they will be able to engage in some of the same kinds of activities there.

We really want to both highlight the theme of the American pavilion, which is technology, innovation, new economy, but use TIF as an anchor to deepen our already strong engagement with northern Greeceto highlight our support for Greece’ entrepreneurs, for the startup ecosystem, for the knowledge-based economy that is going to be so important as part of Greece’s economic recovery.

So I want to thank Helexpo for giving me the opportunity to put a spotlight on all this and for our media friends, I promise you that you’re going to see a very significant American presence at TIF this year and I look forward to seeing you all up there in September!