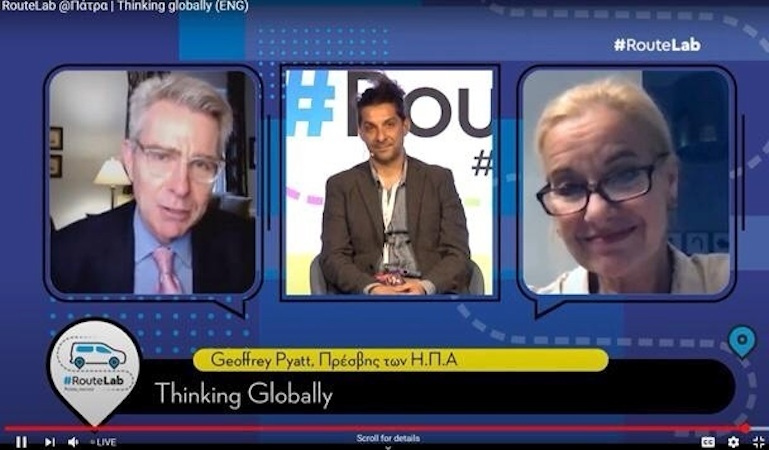 Thank you, Giannis.  Thank you for having me on this panel with Ambassador Grubacic.  I want to start by saying how jealous I am of Orange Grove.  It’s a fantastic asset, a huge contribution of the government of the Netherlands, and I’m very proud that we’ve been able to collaborate over the years on a variety of different programs as you talked about.

I’m also delighted to be back, virtually at least, in Patras.  It’s a city I visited a lot, especially since I’m with the Dutch Ambassador, of course Patras is also famous for its cycling team and for the Race of Sacrifice to Kalavryta, which I was very sorry to miss this year because of the pandemic, but I look forward to getting back again before too long.  It’s been really exciting for me to get to know Patras a little bit over these years, to see what you’re doing at Orange Grove, to see what’s happening at the university, at the technology park.  It’s really one of the hidden gems, I think, of the Greek technology space, and I was really, really proud earlier this year when Think Silicon was acquired by one of the technology giants from my home state, Applied Materials in California.  And it was a real validation of what I had seen in so many other examples of innovative, competitive, and creative startups that were thriving despite all the challenges there in Patras.

So I’m really glad that we’re able to have this conversation today.  What I would emphasize first is that this is a sector that the United States is going to continue to be engaged in.  Of course, Giannis, as you know, we put a big emphasis on technology in 2018 at the Thessaloniki International Fair, bringing all of our technology giants, IBM, Microsoft, Google, Facebook.  But what was really exciting to me about that first year at the TIF was what we saw at the Digital Innovation Pavilion hosted by the Ministry of Digital Policy.  And all of the entrepreneurial energy that was reflected there from across Greece.  From Heraklion, from Patras, from Athens, from Thessaloniki.  And it really validated for me the proposition that Greece could be much more competitive in this space.

We’ve seen that proposition really demonstrated over recent months.  Huge new investment from Microsoft, of course, their largest investment ever in Greece in a new data center.  Hundreds of millions of dollars.  Acquisitions by Microsoft.  New investments by Pfizer, by Deloitte, by Cisco, all of whom are coming to Greece because they see the combination of strong human capital and a very competitive value proposition in terms of the price and retention of good talent.

We highlighted a lot of these issues when my boss, Secretary of State Pompeo was in Thessaloniki last month, and we’re going to do so again next week on Monday.  Secretary Pompeo’s senior scientific advisor will be here in Athens.  We look forward to seeing Minister Pierrakakis, Minister Georgiadis, and then he has a team which will be traveling down to Heraklion to again look at what’s happening at FORTH and some of the other innovative centers that are there.  So this is an area the United States is committed to continuing to support.  We’ve used our public diplomacy programs to good effect, I think, to help empower Greek entrepreneurs to build bridges between the Greek startup sector and the American creative industries with programs like South by Southwest.  I’m incredibly proud of what we’ve done with Code Girls, which is targeted at young women who are interested in science, technology, and mathematics.  And I’ve been really inspired to see some of the Code Girls kids everywhere from Ioannina to Alexandroupoli.  The first one of these that I did in Central Greece, you see over and over again that there is a fantastic appetite and ambition among Greek young people.

Last thing I would note here, and then look forward to the conversations: I think as Greece moves forward, one of the things that the technology space will benefit from is a government in the Prime Minister and Minister Pierrakakis, Minister Georgiadis, Minister Dimas, who I know spoke to you earlier—all of whom have a strong focus on empowering and enabling this sector.  A few years ago, when I started working on the Thessaloniki Fair and talking to American tech companies about Thessaloniki, they would ask, “Where is that?” And nobody really thought of Greece as having a significant role in the knowledge-based economy of the world.  That’s not the case anymore, and in fact, what U.S. tech companies are now asking is, “What else are we missing in Greece?  We missed Think Silicon.  What are the other examples of competitive companies that are ripe for additional capital and market access that comes from working with the big American technology giants?”

So thank you for putting this together.  I’m very jealous that I’m sitting here in my living room and not at the Achaia Clauss winery, which is a beautiful corner of Western Greece that I look forward to getting back to, especially as we look towards 2021 and the Greek bicentennial, since Western Greece played such an important role in the story of Greek independence, I can promise you that I will be back to Patras, and that the Embassy will pay a lot of attention to your part of the country.  So thanks.