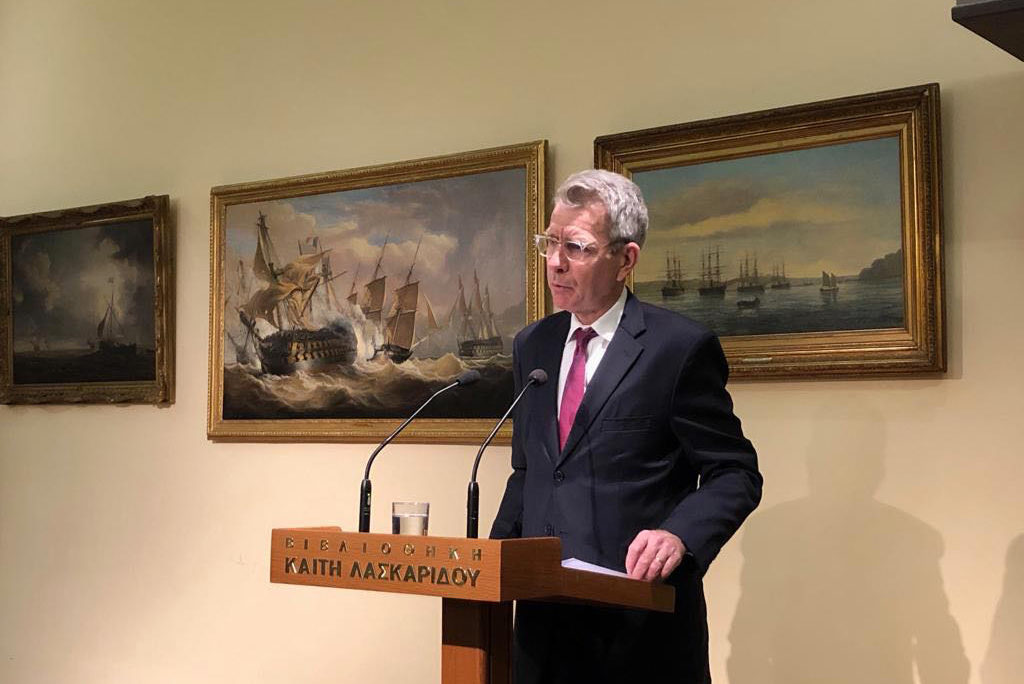 Good afternoon.  It’s wonderful to be back in this beautiful Laskaridis Foundation Library.  I want to start by thanking Rector Kotios and University of Piraeus Dean Sfakianakis for inviting me back to participate in this annual Prometheus Energy Lecture.  Special thanks also to Professor Aristotle Tziampiris for his continued close collaboration with the U.S. Mission.

But what I really want to focus on today is Ambassador Morningstar, because for today’s event, I cannot think of a more appropriate and better qualified official to speak on the energy sector ties among the United States, Europe, and Greece than my former colleague and friend, Dr. Richard Morningstar. Dick has spent large portions of his career working to develop alternative routes to ensure the diversity of energy supplies in Europe, whether through his role as Special Energy Advisor to the President for Caspian Energy in the late 1990’s or as Special Envoy for Eurasian Energy and later Ambassador to Azerbaijan under President Obama, or in his current role as Director and Chairman of the Global Energy Center at the Atlantic Council.

With the Trans Adriatic Pipeline now 99 percent complete in Greece and on track to begin operations next year, there is certainly nobody who deserves more credit for seeing the vision of the Southern Gas Corridor come to life – or, for that matter, more relieved to see this final link being completed – than Ambassador Morningstar.

TAP is an essential piece in a series of projects to ensure diversified routes and supplies not only in Greece, but in the wider European region.  This summer, construction is set to begin on the Greece Bulgaria Interconnector, and an expanded Revithoussa LNG terminal here in Attica has welcomed the first shipments of U.S. LNG ever in the Balkan region.  Plans are also moving forward, with American support, for a floating storage regasification unit in Alexandroupoli following the successful non-binding market test last year.

These projects all illustrate how the Greek energy sector is attracting foreign investment — and why I keep saying that energy, including renewables, is one of the areas of greatest prospects for new American investment that I have prioritized in my work here.

I look forward to hearing Ambassador Morningstar’s perspectives on these projects and other positive developments in the region, including the large hydrocarbon deposits that are being developed in the Eastern Mediterranean, as well as competing efforts by Russia to increase market dominance in Europe through Nord Stream 2 and in multiline Turkish Stream.

Greece remains at the very center of these energy developments, serving both as a growing hub for the region and a source of energy diversification.  And I’m very encouraged that the official cooperation between the U.S. and Greece on these important energy issues has never been stronger than it is today.

So, thanks, Ari, for inviting me back for this second annual Prometheus Energy Lecture, and I look forward to continued close cooperation between the Embassy and the University of Piraeus.  Ευχαριστώ πολύ.