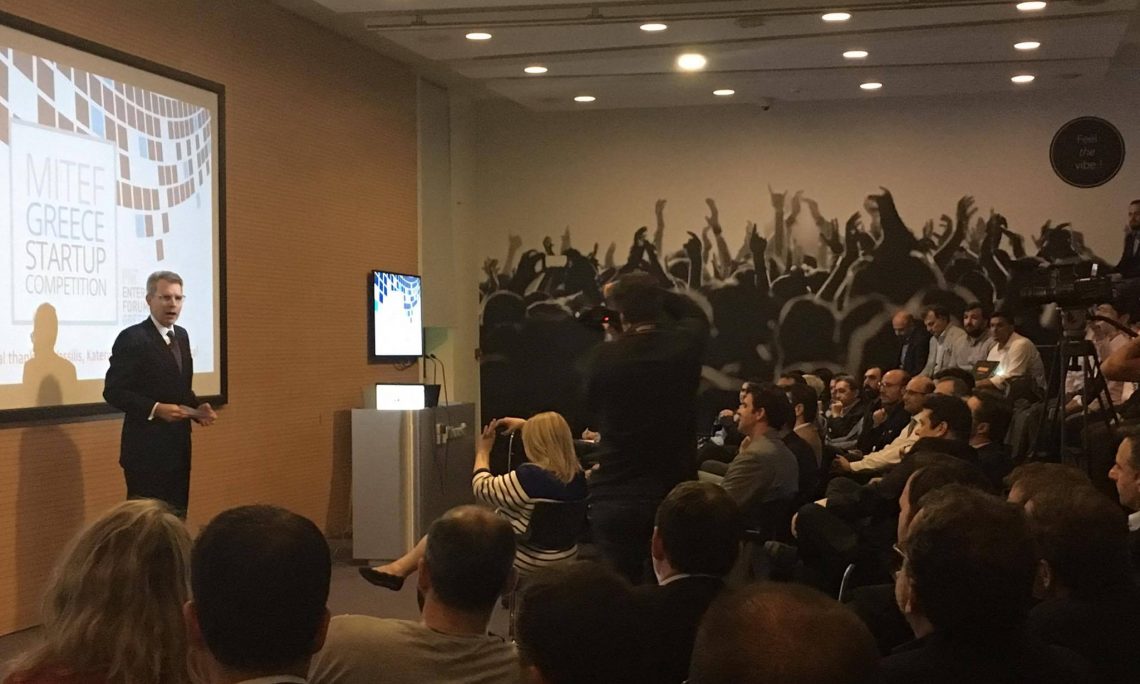 Καλησπέρα! Good evening everybody. I’m sorry to be a little bit late, it’s totally my fault. I wanted to spend a couple of minutes just catching up with Peggy and the Microsoft team, thanking them, and I want to say thank you to Microsoft for their hosting us this evening. I am really delighted to be here. I’ve got a small role just kicking it off, but I wanted, first of all, to underline how proud I am of the partnership that we have in supporting this event. I’m grateful to Linda for coming all the way out here to support – to support, and to coach, and to mentor – but also to all of our partners for making this possible.

From where I sit, the MIT Enterprise Forum, what we do with this competition is a real game-changer for Greece. I’ve been here about six months now. One of my highest priorities is to use the platform that I have at the Embassy to support the growth and success of Greece’s startup culture. I’ve been really impressed by everything I’ve seen so far. There is obviously enormous potential in this area. Greece has the human capital, it has the sort of entrepreneurial, democratic culture which, I’ve concluded over the course of many decades looking at this space, is really the critical ingredient for success.

And, so, what I try to do with our work at the Embassy is to ensure we are bringing the best of American know-how, the best of American experience, but, also, to use the platform that we have at the Embassy to lift up the narrative about the startup culture in Greece, about the success stories that already exist, to create opportunities, to create visibility. So this is one of the, sort of, concrete manifestations of that effort.

Tonight is an opportunity for you all to make your best pitch, to show what’s really happening in this space in Greece. But also, I think, to show to each other that there is a supportive culture, that there is an environment in which young Greek engineers, entrepreneurs, scientists, can make a go of it. And that’s something which is obviously important to Greece and the Greek government, but it’s also very important to the United States.

I want to, again, say special thanks to Linda. You have been a hugely important part of the success of this whole pitch effort. And I know you’ve got other responsibilities and other clients and other jobs around the world, but I want to say thank you on behalf of the Embassy and the U.S. Government for the time and space that you have made for Greece.

Last point I would conclude with. I have been traveling around Greece a lot. I’ve visited the scientists and technologists in Crete, in Heraklion, in Thessaloniki, young people in Trikala involved in e-governance. So really, from the length and breadth of this country. And one thing that has been very clear to me is that the future of Greece, the future of the Greek economy, is going to be written by people like yourselves.

So I’m very, very excited that the United States is able to be a partner for his effort. I look forward to hearing from Linda and everybody on my team what results from tonight’s conversations, and I want you to know the U.S. Government is committed to continuing our work to support what you are doing because it’s so, so important to our interests in seeing a prosperous and successful Greece moving forward as part of Europe, as part of the Eurozone, as a strong ally.

So thank you very much, good luck, and keep your cool!