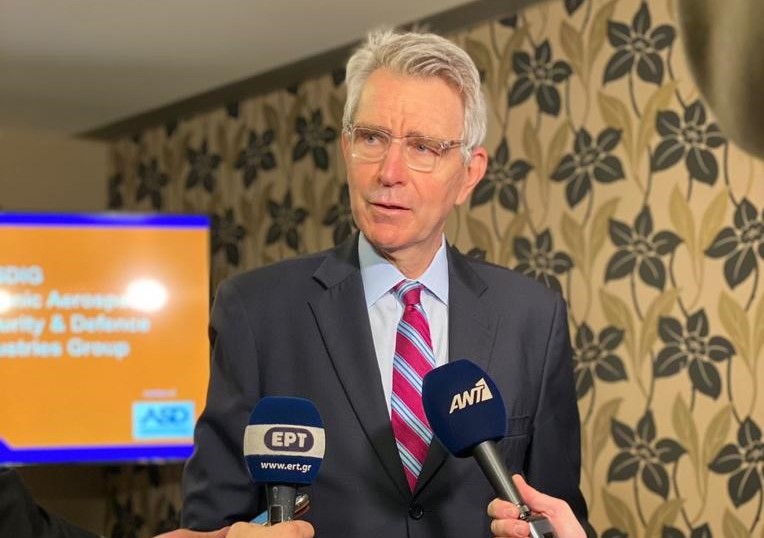 About two years ago, Minister Georgiadis and I were here in Elefsina at the shipyards.  We spoke then with many of the shipyard workers who are in the room today about a vision to return Elefsina Shipyard to its historic status as a world-class maritime services center and an energy hub for this region.

We expressed a commitment to help revive this strategic asset and put this important sector of the Greek economy, and in particular the Attica economy back to work.

I want to commend the Greek government, ONEX but in particular all of the Elefsina shipworkers here today, for the efforts they have already made to make this vision a reality.  We already have the success of ONEX’s Neorion Syros shipyard to point to, and now the United States looks forward to partnering with Greece to see the revival of both Elefsina and the neighboring Scaramangas shipyards.  Today’s industry day is another step forward in that process.

The U.S.-Greece trade and investment relationship has reached a historic high.  As we look to the future, we see a thriving economic partnership that promises opportunities and prosperity for all of our countries, while also opening doors for opportunity throughout the Eastern Mediterranean, Western Balkans, and beyond.

While there is still much work to do, I am happy to say that we have seen dramatic progress towards our goal of developing the maritime pillar of that partnership as well.

In the Elefsina project, we see the convergence of three of our mutual interests:  defense, energy security, and maritime industry.

On defense, let me be very clear, while we are pleased that a robust international competition, among many of America’s allies here in Europe has provided the Hellenic Navy with several options for their modernization program, we believe the U.S. Navy’s offer, in partnership with Lockheed Martin, to build a scalable version of the Hellenic Future Frigate, what we call the HF2, and to upgrade the Hellenic Navy’s MEKO-class fleet, is in the best interests of both of our countries.

I would emphasize in particular the U.S. Navy judgement that the MEKOs have many years of life left in them, if equipped with new weapons and combat systems.  As regards the U.S. intention to do this work here in Attica with Greek workers, the U.S. Navy has conducted thorough surveys of both Elefsina and Scaramangas, and we are fully confident that, with the appropriate capital investment, both shipyards are viable options for new construction and the MEKO upgrades.

And let me be clear, the U.S. government stands 100% behind the Lockheed Martin offer.  The HF2 would build on a rich portfolio of Lockheed Martin cooperation with the Hellenic Armed Forces, including the F-16s, the C-130s, the P3s, the MH-60 Romeo ASW helicopters, and in the not too distant future, the F-35 fighter.

Moreover, Lockheed’s strong network of industrial partnerships in Greece, as well as its robust cooperation with Fincantieri of Italy make me confident that they can deliver on time and on specification for the Hellenic Navy.

Indeed, the Lockheed Martin partnership with Fincantieri offers the prospect of leveraging the resources here in Greece together with Fincantieri’s Italian know-how, just us the two companies have collaborated to revive the American shipyards at Marinette, Wisconsin.  There is no reason we can’t do exactly the same thing here in Greece.

Our total package solution is scalable to meet both the Hellenic Navy’s requirements and budget, and, unlike some of the other options, the U.S. proposal will simultaneously revive and revitalize the Greek shipyards, creating 500-1,000 full-time, local jobs.

I have personally delivered the U.S. government’s offer to Greek authorities, and we look forward to further official discussions between our two navies in the near future.  These discussions are the necessary next step to finalize the scope and budget and get the rebirth of the shipbuilding industry here in Attica underway.

On energy, we are pursuing many great opportunities to work together and to support Greece’s priority energy projects.  The Alexandroupoli floating regasification unit (FSRU), I’m happy to note, just announced its Final Investment Decision, marking a major step forward for this strategically important project.  The Greece-Bulgaria Interconnector, despite the wildfires and COVID, is nearing completion.  The Trans-Adriatic Pipeline already plays an important role in southeastern European energy security.  And the proposed Interconnector Greece North Macedonia promises to further develop this country’s role as a regional gas hub.

We also look forward to working with our partners to explore electricity interconnections using renewable sources, and new offshore wind opportunities, all of which underwrite political and economic stability and our climate goals throughout the region.

Greek companies already dominate global LNG fleets and there is a great base to build on that with shipyards like Elefsina contributing to Greece’s emerging role as a southeast European energy hub and a center of excellence for maritime industries.

I’m encouraged also that discussions between ONEX and DFC are moving forward productively.  DFC involvement in the commercial development of the Elefsina Shipyard, as Minister Georgiadis alluded to, would represent an additional U.S. government commitment to this project beyond the strong political support that we we have expressed, and would highlight ONEX’s commitment to sustainability, renewable energy, and environmental stewardship.

Elefsina serves as an enduring symbol of the maritime partnership between our two countries, a partnership that goes back to the days of the Marshall Plan and the Liberty Ships that came from America helping to give birth to Greece’s world-leading shipping community.

I want to congratulate Panos on all that he has accomplished on Syros island, where ONEX took the defunct Neorion Shipyard and returned it to a productive status, truly the beating heart of that island’s economy today.  It has been a dramatic story of rebirth that I have been proud to see from its first days.

I also applaud Minister Georgiadis for his energy and vision in driving the revival of the Greek shipbuilding industry and cutting through the impediments to that development.  And, most of all, I look forward to seeing a similar renaissance at both Elefsina and Scaramangas shipyards with the U.S. Navy and Hellenic Navy partnership playing a catalytic role towards that end.